The shape of capital to come

In the Netherlands, the Afsluitdijk is a 32km by 90m dyke and causeway running between the provinces of North Holland and Friesland

Completed in 1932 after five years of construction, it separates the IJselmeer and its hinterland from the North Sea, providing not only physical protection but also stimulating economic growth in the surrounding reclaimed land. It was a major public works project with huge societal importance, in part a response to 1916’s devastating floods.

Project Afsluitdijk is a four-year renovation project overseen by the Rijkswaterstaat, the national water management agency, with work beginning in 2018. This time around, private capital will be involved, taking the form of a public-private partnership (PPP). PGGM is the main investor, working with the PPP arm of the BAM construction group.

For PGGM, the partnership represents a major commitment to the domestic economy, benefiting wider Dutch society as well as pension fund members. Like other Dutch pension funds and managers, PGGM has been keen to showcase the project as an example of its contribution to Dutch society.

The matter is also political. In 2017, Dutch pension funds were estimated to invest an average of 12.4% in the local economy, a figure the then minister for economic affairs, Henk Kamp, said should increase. Vehicles like the new Invest-NL fund are intended to help.

Sponsored by the Dutch government, Invest-NL will seek to raise local institutional capital for energy infrastructure and other projects. It could prove to be a model for other schemes around Europe. 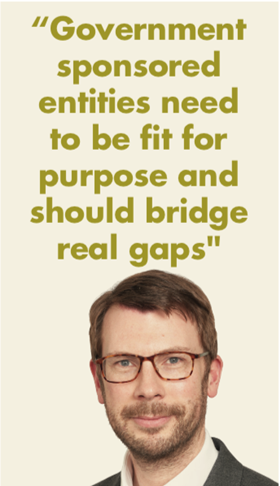 Like the original Afsluitdijk project, the latter phase of whose construction took place during the the Great Depression, this renovation project will also coincide with a period of major economic downturn.

Pension fund capital will be highly sought after to fund infrastructure projects like this, as well as in areas like energy transition, but perhaps more pressingly in corporate credit. As the IMF pointed out at the end of May in its Global Financial Stability Report, maintaining the flow of credit to corporates will be crucial in mitigating the effects of COVID-19.

Pension funds are well placed to do this – both directly and indirectly through synthetic securitisation as the European Investment Fund and PGGM have done, the latter now in partnership with Alecta.

These deals involve the investor taking on the first-loss tranche of an agreed loan book, allowing the bank to free up capital on its balance sheet for further lending. Recent proposals from the European Banking Authority should make such transactions easier. Such deals are also an effective way to channel credit to SMEs in particular and provide equity-like returns at lower risk.

Government-backed loan schemes are easing, at least temporarily, the supply of credit, and possibly for a longer period. But in coming months and years, dependent on how bank balance sheets weather the storm, expect to see more state-backed funds aimed at crowding in credit to lend to domestic corporate borrowers, particularly SMEs and other hard-to-service borrowers.

Some will look to France, where the €210m PME Emplois Durables fund, backed by insurer AG2R La Mondiale, social protection group Klesia and the employer group MEDEF, took shape in 2016 with the intention of providing capital to SMEs. Its political sponsor was Emmanuel Macron, then economy minister under President François Hollande. The fund followed on from the earlier CDC-sponsored NOVA and NOVI lending vehicles, which were managed by external groups and which succeeded in sourcing local institutional capital.

Not all such state-backed schemes are successful, however, and governments can find it hard to marshal institutional capital. In the Netherlands, the NLII Dutch Investment Institution – created in the aftermath of the global financial crisis of 2008-09 – shut its doors in 2018 after just four years of operation, citing a lack of investable projects.

A similar institution to support mortgage investment bonds also closed, although in part the demise of these institutions was due to the proper functioning of markets – in other words, they were not needed – so should not be seen as a failure.

Equity funding should not be overlooked. In Scandinavia, sizeable pension funds are important providers of long-term capital to domestic capital markets.

To take just two examples using end-2019 figures, ATP has about DKK32.9bn (€4.4bn) in the domestic equity market, or around 1% of the market cap of the main listed stock index. Alecta invests SEK128.4bn (€12.2bn) in the Swedish equities market, around 2% of market cap. Also in Sweden, the SEK622bn (€59bn) AMF Pension recently signalled its willingness to provide up to SEK5bn in recapitalisation funding to struggling domestic firms.

In other areas, like venture capital, the UK’s British Patient Capital is looking to crowd in £7.5bn to invest in domestic venture and growth companies, in part to boost overall growth but also to bridge a funding gap for early stage enterprises.

As Europe’s Green Deal takes shape, and as domestic economies look set to face an unprecedented economic storm, stable long-term capital will be crucial. Yet there are lessons from the last crisis: government sponsored entities need to be fit for purpose and should bridge real gaps in financing.

As I wrote last month, fiduciaries need to be careful to ensure the risk-and-return characteristics of government-backed loan investment funds stack up when considering such ventures. Investors should want to see strict credit underwriting standards if they are to make investments on commercial terms.

Beneficiaries will not thank their pension funds if fiduciaries misallocate long-term capital, however good their intentions.