UK DB: Pushback over UK proposals for ‘one size fits all’ funding code

Not long before the UK went into its COVID-19 lockdown this March, The Pensions Regulator (TPR) launched the first of a two-stage consultation on a revised defined benefit (DB) funding code.

Responses to the first consultation, focusing on the proposed approach and underlying principles, were submitted last month and revealed unease about the prospect of a “bespoke” approach to scheme valuations being based on the more prescriptive “fast track” compliance route and not offering genuine flexibility.

In addition to the “twin-track” approach to scheme valuations, an important feature of TPR proposals is that schemes target an appropriate long-term objective (LTO), which should be to reduce dependency on funding from the sponsoring employer and be invested with high resilience to risk by the time the scheme is “significantly mature”.

TPR has not yet defined the parameters or metrics for the fast-track framework, but has set out its views on potential definitions of low-dependency funding and significant maturity, saying for the former that it considered the discount rate to be somewhere in the range of Gilts-plus 0.25-0.5%.

The Pensions and Lifetime Savings Association (PLSA) has told TPR large parts of the detail of its proposals need more work, expressing concern that the proposed code was too prescriptive, with elements too “one size fits all”.

It has urged the regulator to seek to provide greater optionality for schemes within the fast-track route, and ensure the bespoke approach is not anchored to its fixed assumptions.

At Mercer, chief actuary Charles Cowling says a fast-track option based on a simplified regulatory approach is suitable for certain pension schemes, but that “fast-track proposals should not drive regulator thinking and behaviour for pension schemes adopting a bespoke approach”.

He says the new funding regime needs to properly embrace cash-flow-driven investment (CDI) and funding strategies, as opposed to a Gilts-based approach to financing and valuing pension liabilities.

“CDI strategies now offer the opportunity for additional investment returns which mean that the current funding strategies of most UK pension schemes could be delivered in a CDI framework without having to seek additional cash from employers,” he says. “But, importantly with a cashflow-matching strategy, we can use dynamic discount rates aligned to yields on CDI strategies for valuing pension liabilities and achieve significant reductions in funding volatility and risk.” 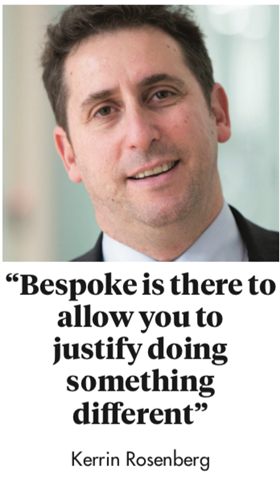 According to PwC, the parameters underpinning any new funding regime should be flexible enough to avoid a need for pension schemes to back their pensioner liabilities with Gilts.

“Forward-looking parameters should focus on the cashflow obligations of pension funds, with flexibility to find the best assets to meet those cashflows, instead of focusing on a single-point valuation of the liabilities and comparing those to a single-point asset number,” it said.

Kerrin Rosenberg, CEO at Cardano, says his firm sympathises with TPR’s bid to introduce objective criteria to the DB funding regime, which he says is currently an outlier – both in the UK and internationally – in lacking these.

He says TPR has done a good job of being flexible, but that it remains to be seen where TPR sets the standard for fast track and how larger schemes react.

“Bespoke is there to allow you to justify doing something different, and I very much hope that many funds, particularly large funds, go down that route,” he says. “To some extent it’s going to be down to those trustees and the actuaries, but it would be a shame if we saw a herd mentality because there are a lot of pension funds that can very legitimately justify going down bespoke and the framework TPR has proposed gives that flexibility and it should be used.”

According to David Fairs, executive director of regulatory policy, analysis and advice at TPR, bespoke is not “just fast track in a different guise”.

“We are simply trying to ensure that trustees understand the risks in their approach, they have measured them and, if appropriate, put in mitigation,” he wrote in a TPR blog.

“Trustees of schemes in bespoke may have a closer relationship with us if we want to ensure their valuation meets our compliance expectations. However, we envisage that many bespoke arrangements will be relatively straightforward and may not require further engagement from us.”

TPR has said it will undertake an impact assessment to inform the setting of the proposed fast-track parameters. Having extended the closing date of the first consultation, it will not be launching the consultation on the draft DB funding code itself until spring 2021.