Perhaps no single group of institutional investors elicits as much fascination and admiration as US university endowments – in particular those of the Ivy League, and among that elite group the Yale and Harvard endowments in particular.

Figures like David Swenson, CIO of the Yale Investments Office since 1985 and Jack Meyer, CIO of the Harvard Management Company from 1990 to 2005, have become legendary among their peers, and their respective institutions and strategies the subject of envious fascination and tireless scrutiny.

Yale, Harvard and other Ivy League endowments are of course workhorses that provide funding for the universities as well as paying for a range of other programmes. Harvard’s endowment disbursed $1.9bn to the university in the fiscal year to end-June 2019 alone, for instance.

They have also been pioneers in new investment approaches as leading proponents of the Modern Portfolio Theory pioneered by Harry Markowitz (see Perspective in this issue of IPE) whereby the risk-adjusted returns of portfolios are improved by adding asset classes with various levels of correlation.

Under Swenson, Yale famously pioneered a strategy noted for its high allocation to alternatives, including private markets and hedge funds.

Much touted by investment consultants from the 2000s as news of Yale’s success spread, emulating it was something of an article of faith for ambitious investors. Many have sought to imitate Swenson’s approach, yet few have successfully pulled it off.

Often there is a negative tone in the comparison between ‘sophisticated’ Yale-type diversification strategies and ‘dumber’ pension fund type strategies with a less racy 60/40-type portfolio split.

Stubbornly wide pension deficits would be history, if only the dull grey suits on pension committees would up their game, alternatives managers have opined in articles and on conference stages the world over. A slide on the Yale model has long been a standard feature in the Powerpoint decks of hedge fund and private equity sales presentations.

Now, of course, there is a much more nuanced understanding about why other investors cannot just naively emulate the endowment approach. Such an approach to diversification can add cost with no guarantee of success.

Scale is a factor: smaller investors (whether endowments, pensions or others) cannot obtain access to the best funds; large pension funds and sovereign wealth funds may be able to get access but for capacity reasons often cannot get the right level of exposure without adding undue operational complexity and increasing liquidity constraints. 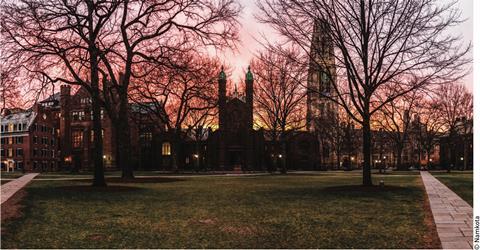 Yale campus: the sun is not setting on its endowment fund’s high exposure to private markets and hedge funds

The large endowments tend to occupy a sweet spot in terms of size, whereby they are large enough to get access to the best strategies, rich enough to pay the right internal staff, but small enough to reap the benefits of their asset allocation and manager selection skill across the portfolio.

US endowments, as a rule, combine transparency with opacity in their reporting, with plenty of data and information but divulging little actionable intelligence that would give other institutions an edge.

Elroy Dimson – well known for his work on the Credit Suisse Global Investment Returns Yearbook and at London Business School – points to the sheer power of the networks that Yale and others have built, in particular through MBA programmes where alumni have gone on to set up private capital or hedge fund companies. Skill and track record at identifying above-average managers is another success factor, he maintains.

One of today’s investment mantras is long-term investing, which many investors would certainly claim to be doing.

David Chambers, Elroy Dimson, and Charikleia Kaffe have sought to identify the extent to which US university endowments act as true long-term investors*. Studying the portfolios of 12 mainly Ivy League endowments since 1945 and in some cases from the turn of the 20th century, they find that the universities, on average, invested counter-cyclically – decreasing risk assets ahead of crises and increasing them after.

Among the authors’ key findings: larger endowments tended to switch to countercyclical assets earlier, while their smaller counterparts followed. The “big three” endowments – Harvard, Yale and Princeton – were the first movers.

Maintaining alternatives allocations of over 50%, Ivy League endowments also maintained significantly higher weightings to equities than their non-Ivy League counterparts in the post-war decades up until the 1970s, the authors found.

From the 1980s onwards, they maintained significantly lower allocations to equities as they sized up their alternatives programmes. Yale, for instance, first added private equity in the 1980s and hedge funds in the 1990s, retaining sizeable allocations to both.

University endowments the world over now face a new investment dilemma – engagement with fossil fuel companies versus divestment. Swenson himself met with Yale faculty and students in February 2020 to debate the topic. Pressures to invest sustainably – particularly from on-campus voices – will doubtless continue.

COVID-19 is of course placing unprecedented pressure on university finances – including some elite institutions – as student admissions dry up. Brown University, an Ivy League school, has issued $700m (€591m) in debt this year (see Letter from the US in this issue).

COVID-19 and they will not face the strains that smaller and financially weaker institutions undoubtedly will. Nevertheless, their boards will still have to manage their finances in a way that is equitable to future generations.

While Ivy League endowments will doubtless retain their fascination and allure as sophisticated investors for years to come, pension funds can at least be thankful that they do not face the same immediate pressures on their resources.