Germany’s financial regulator has urged employers and unions to make use of the new legal framework for defined contribution (DC) pension funds.

The Betriebsrentenstärkungsgesetz (BRSG) was introduced at the start of last year but as yet no non-guaranteed pension funds have been established.

At a conference in Berlin earlier this month, Felix Hufeld, president of the German financial supervisor BaFin, called on all stakeholders to make use of the new legal framework.

He emphasised that, while the new non-guaranteed model might “lead to uncertainty”, it still included safety mechanisms like a ‘buffer’ pool for times of increased volatility.

Hufeld closed his remarks at the conference with a clear message and warning to the employers and employees if they failed to embrace the BRSG.

He said: “If the stakeholder negotiating the collective bargaining agreements are not using the new possibilities, the legislator will inevitably have to question whether voluntary models are feasible in retirement provision – or whether, like in other countries, mandatory models including the possibility of an opt-out might have to play a bigger role.”

However, mandatory systems and auto-enrolment models have so far failed to gain much support in Germany.

Meanwhile, German union Ver.di has hinted that an insurance group could be the first to set up a pension plan under the new no-guarantee DC framework – in the form of an in-house test model. 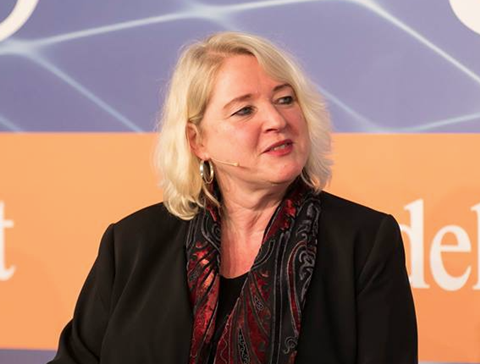 Andrea Kocsis, Ver.di, speaks at the 2018 Handelsblatt conference in Berlin

At a panel debate during the same conference, Andrea Kocsis, deputy chair of the service industry union, said a “major project was close to completion”, according to German media reports.

After finalisation “over the next months” this would mean the first pension plan introduced under the BRSG framework, which came into force in January 2018.

Such plans must be set up jointly by employer and employee representatives, and cannot offer any guarantees regarding returns or retirement income.

The new DC plans are also called Sozialpartnermodell after the “social partners” negotiating them, or Tarifpläne after the collective bargaining agreements into which they legally have to be integrated.

Kocsis told German online pension news platform LeiterbAV that negotiations with an unnamed insurance group were for an in-house collective bargaining agreement, which some larger German companies have in place.

Media commentators suggested that the insurer in question might be one of those that have come forward in various groups in the past year to offer solutions for the new DC plans.

In 2017, shortly after the BRSG was passed by the German government, five insurers formed a consortium – Das Rentenwerk – to create a product under the new rules to be used by the social partners if needed.

Last year insurer R+V, in partnership with Union Investment, beat them to it with the creation of the R+V Pensionsfonds.

Zurich and Talanx have since also formed a joint venture, and a further group of smaller mutual insurers has formed the “Initiative Vorsorge”.

In setting up the first workable new DC plan, any of these collaborations could present their product to clients including live testing and a track record.

According to media reports, the other panellists at the conference – all of them pension industry stakeholders – were surprised by Kocsis’ announcement.

However, her remarks were reported as being made “rather in passing” and “nonchalant”.

Kocsis also hinted at “talks with a company in the aviation industry” but again gave no details.