UK broadcaster ITV has eradicated the net pension deficit of its defined benefit (DB) schemes, marking an improvement of more than £300m (€340m) in just 15 months.

In a first-quarter trading update on Thursday, ITV said it had reduced the net deficit to “nil” as of 31 March – down from £83m at the end of December last year. On 31 December 2016, the deficit stood at £328m.

The deficit was calculated on an IAS 19 accounting basis, and the company emphasised that on an actuarial valuation, the shortfall on section A of the three-part defined benefit scheme was £489m at 1 January 2017.

ITV’s 2017 annual report showed the improvement in its schemes’ funding position had been largely down to a major update of membership data. This had removed £145m from the net shortfall, alongside a further £80m employer contribution and £53m in investment gains. 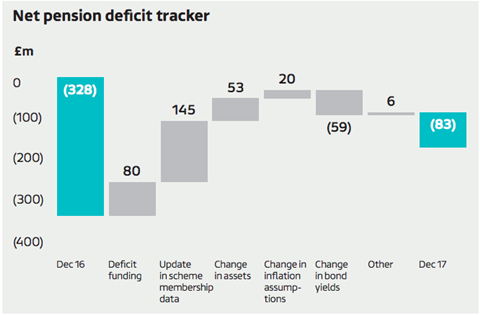 A new eight-year funding plan was agreed with the trustees for section A of £60m a year until December 2025, ITV said. The company committed to paying in £80m in total per year to the three schemes, including contributions to sections B and C.

In the case of the latter two sections, ITV said it was “still in negotiation with the trustees in relation to 2017 funding valuations but [we continue] to pay the deficit funding contributions of £5.5m per annum which were agreed as part of the previous valuation discussions”.

ITV closed its DB schemes to new members in 2006 and then to future accruals in 2017.

As part of its annual report for 2017, the company said its balance sheet remained strong and the business continued to be highly cash generative.

Earlier this year, the broadcaster squared off in court with the UK’s Pensions Regulator, which was pushing for ITV to fund a £90m deficit in the DB scheme of a former joint venture, Box Clever. Box Clever was launched by ITV (then known as Granada) in 2000 with fellow broadcaster Thorn, but declared bankruptcy in 2003.

The case was heard in February at the Upper Tribunal and a judgement is expected later this year.