Opportunities exist despite the challenges of a low-interest-rate environment

What a difference 18 months make. Back in autumn 2015, economists and investors were all aflutter at the notion of plummeting interest rates, and the prospect that central banks might slash short-term rates to negative levels, thereby imposing a significant price on parking cash. Fears abounded of Japanese-style deflation and liquidity traps. Yet markets have reevaluated, accepting the likelihood of gradual Federal Reserve hikes and ongoing accommodation from the European Central Bank (ECB) with tapering at a glacial pace.

Both US and European central banks are still engaged in unorthodox policies, as the ECB even enters new terrain by purchasing corporate bonds. Both institutions are relying on negative deposit rates. “That said, we have witnessed a false dawn for convergence,” says Marc Chandler, global head of currency strategy at Brown Brothers Harriman in New York. Rate policies across the Atlantic reflect the implications of two very different economies.

In Europe, a large pool of workers on the sidelines has potential to come into the labour market, as a measured recovery slowly develops. “In addition, we have a large current account surplus,” notes Daniel Gros, director of the Centre for European Policy Studies, a think tank based in Brussels. “Thus, we are far from exhausting our domestic potential, at least in terms of demand. Nor are we anywhere near a situation in Europe where inflation might accelerate.” Although Gros anticipates full employment in a few years, he still envisages no inflation.

But the ECB lacks the ‘dual mandate’ of the Fed for fostering economic conditions that promote both stable prices and maximum employment. The ECB, by contrast, is solely focused on price stability. That goal was predicated on the experience of the 1980s, which suggested that inflation would accompany fuller employment. In consequence, Gros explains, “the ECB must go through the motions of stimulating the economy, even with no prospect of results. It must continue to buy bonds or set negative interest rates, because it can’t reach its inflation target.” 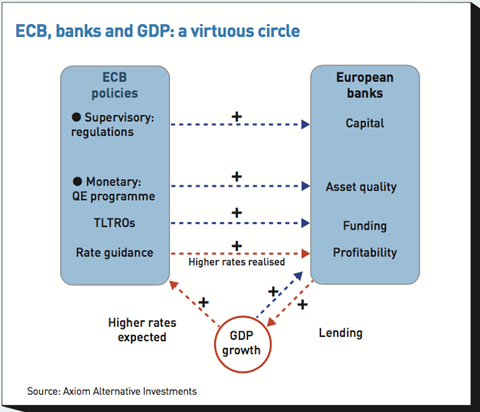 Could the ECB try to adopt a dual mandate of its own? That is unlikely, as it would require a treaty change, which Germans would doubtless oppose. “The ECB is trapped, nailed to the masthead of 2%, and they must keep their word,” Gros warns. He is unconcerned for price stability in the short run, explaining, “corporations are making investments based on their perceived price of equity risk capital. Their internal rate of return has hardly moved in five years.”

Structural differences
A further key distinction is that European lending to the real economy relies on the activities of banks, whereas in the US much of that role is performed by the capital markets. The ECB is obligated to work with the banking sector, on which businesses depend. “Hence the ECB contributes to the asset quality and capital position of its banks. It uses funding vehicles such as the TLTRO [targeted longer-term refinancing operations], as well as forbearance, to soften the impact of regulation,” says Gildas Surry, senior analyst and portfolio manager at Paris-based Axiom Alternative Investments.

Last summer brought an inflection point, affecting the expectations of European institutional investors. The purchase programmes by the ECB started to deliver. “We’ve seen a continuous pick-up in lending activity from the start of 2017. ECB president Mario Draghi has reached a more comfortable position to taper the purchase programme, and may start discussing potential increases in rates for the deposit facility,” Surry suggests. The ECB’s deposit rate of minus 40bps is at its lowest ever. There is debate as to the timing of an increase from that nadir to perhaps minus 15, as well as the sequence of tapering purchases.

Chandler believes the ECB will end asset purchases this year, probably after the German election. Even if the bank does not raise rates soon, the prognosis is improving. “If the patient was in the intensive care in 2010, he is now out and recuperating, even if at a frustratingly slow pace.” Sister central banks likewise follow status quo. Switzerland and  Sweden remain the most negative. Risks of deflation have all but vanished, in Chandler’s view, although Japan may be the exception. He says: “If the Bank of Japan accepts it won’t meet a 2% target, they will continue asset purchases.”

In America, Fed chief Janet Yellen hinted in May 2016 at the possibility of negative rates, “in some future very adverse scenario”, but then quickly backtracked. James Glassman, head economist at JPMorgan Chase, points to two reasons for her stance: rates were already close to zero, generating diminishing returns from asset purchases; more important, the news since the Brexit referendum exceeded expectations, Europe has performed better than anticipated, and the US is approaching full employment. “She doesn’t want to be behind the curve,” Glassman suggests.

There are consequences to suppressing interest rates for too long. Glassman says: “The central bank needs to shift focus, rather than cause fresh problems by keeping rates artificially low.” There is also confusion about the term quantitative easing, which refers to increasing the quantity of money – which is not, in fact, happening. (Former Fed chief Ben Bernanke never actually used the phrase.) Central banks are buying assets, which are piling up as excess reserves as a by-product. The intention was to affect long-term rates. We understand that when economies grow slowly, the natural level of rates comes down. Central banks have now removed securities from the market, replacing them with short-term obligations. “So these are no longer natural rates,” Glassman notes, asking, “where would rates settle if central banks pulled away?”

There is a danger that structural deficits will grow. Across the world, ageing demographics and slowing economic growth are making it harder to pay for social programmes, including pressures on healthcare systems. “The mindset of the market is stuck in recovery mode,” Glassman says. He describes the fear that the market is losing momentum as a “head fake”.

Axiom’s Surry sees European risk as overpriced. “Draghi won’t give up and Europe is enshrined,” he assures. With growth at the margin improving, he would overrate short-duration bonds over equities. So the question is, how long to stay in equities. They are not expensive if economies keep growing. Low interest rates are boosting liabilities. Since the US, Europe and Japan all embrace 2% inflation, do pension fund managers believe their central banks can achieve that? If so, do they belong at zero in real terms?

It is more expensive to bet on rates going up than down, because a rising rate bet leaves money on the table. “In the 1970s, bond managers knew how to perfect their timing,” Glassman recounts.

“That is good news for fixed-income managers,” says Chandler. They can earn alpha in a way no longer open to equity managers in a world that is moving toward passive investing. Despite the challenges of low returns, fixed-income specialists have room to finesse the herd mentality and shift gears quickly.