Cross-border Commuting: So near and yet so far

Gail Moss outlines a new project to aid pensions communication for the 100,000 daily cross-border commuters in the Limburg trinational region

• Maastricht University is developing a register of cross-border pension rights between the Netherlands, Belgium and Germany.
• The register will cover state, occupational and supplementary pensions.
• The university’s input will focus on tax law to make the three systems comparable.

Up to now, work on cross-border pension schemes has centred largely on standardising single company arrangements between different EU countries, making it easier for company employees to be seconded elsewhere or to move the domicile.

However, a similarly pressing need is to make pension arrangements easier for EU citizens who commute daily to work for a company or institution in a neighbouring country.

One locality where cross-border commuting is common is the Limburg region, which includes fringes of both the Netherlands and Belgium, and which borders North Rhine-Westphalia, the most populous state in Germany. Over 100,000 Dutch, Belgian and German employees work in neighbouring countries, according to Statistics Netherlands.

But although movement between the three different countries is a part of normal daily life, the EU believes that the single market is held back by complications in terms of providing pension arrangements for these individuals. And it considers this could be holding back economic growth.

According to Atlas van Kansen (Atlas of Opportunities), a study of Dutch border regions and their problems, “If the four border regions – the South of Limburg (the Netherlands), the district of Tongeren and Liège (Belgium) and the Städteregion Aachen (Germany) – succeed in integrating their labour markets by cross-border co-operation, the number of available jobs for the population of the four regions [which it estimates at 1.7m] will increase.”

The Institute for Transnational and Euregional Cross Border Co-operation and Mobility (ITEM) was founded in 2015 to act as a hub for research, advice, and training activities relating to cross-border worker mobility. Its aim is to simplify the legal, economic, cultural and administrative aspects of cross-border working. Members include Maastricht University, the province of Limburg and the Meuse-Rhine Euregion.

As part of this initiative, Maastricht University is developing a register of cross-border pension rights between the Netherlands, Belgium and Germany, as a pilot for an eventual EU-wide facility.

The register will cover state, occupational and supplementary pensions, for all people with pension rights. 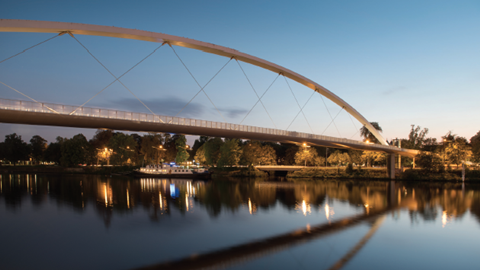 The Meuse in Maastricht: 100,000 workers commute across national borders each day in the Limburg trinational region

It will act as a tracking service, providing individuals with an overview of their total accrued pension entitlements from the three countries, including entitlements both from an employee secondment out of their home country, and from work that requires a daily commute across the border.

“The problem at present is that you can only see the pension entitlement which you have accrued in your own country,” says Anouk Bollen, director of ITEM. “By putting all this information together, the individual can work out if they have an adequate pension as a whole, or if they have to take other steps to reach an adequate level of retirement income.”

She adds: “This doesn’t mean that the individual will be advised what steps to make to reach that income. The function of the system is to get across personal information, and awareness of a possible gap in the income required.”

The format of the website will be similar to that used for the Track and Trace Your Pensions in Europe (TTYPE) project, the Europe-wide tracking system being developed by pension providers including APG, PGGM, MN and Syntrus Achmea, with partial European Commission funding.

TTYPE rather than ITEM will set up the register itself, although the ITEM team will contribute policy ideas. “Our project will be fully in line with the ideas of TTYPE, but focusing just on three countries,” says Bollen. “By starting small you get more progress, and you also get new information which can then be used to implement the system throughout Europe.”

She adds: “You cannot change national systems, but you can work on transparency. That is all an individual needs. Given an overall insight into their personal situation, they are then able to act and make decisions.”

Data for the website will be taken from the Dutch and Belgian central registers. Both the Dutch pensions register (mijnpensioenoverzicht.nl) and the Belgian pensions register (mypension.be and sidedis.be) show personal pension entitlements from the first and second pillar. Work is being carried out on the Dutch register to include the third pillar as well.

However, Germany does not have a central tracking system, so the project will co-operate with Osnabrück University to work out how to add second pillar information for the country.

The aim is to create a format for presenting the information that is comparable between the three pension systems. “It is not just about linking the systems,” says Bollen. There are problems because of the different pension regimes, tax rules, and tax qualification for first and second pillar pensions.”

Besides these differences, there are other, more mundane obstacles to standardising the information accessed by users. For instance, in order to join the Dutch pensions register, an individual must possess a personal identity number. But only those living in the Netherlands are allocated one. So someone who lives in Belgium, for example, but who works in the Netherlands is not able to use the Dutch register because they do not have a number.

“Another issue is privacy law, which means it is difficult to convey personal digital information across a national border,” Bollen adds. “The project focuses on solving these obstacles, and implementing solutions within the register.”

A complementary aspect of the project will concentrate on the differences in tax legislation between the three countries, including the tax qualification of pensions. Bollen says: “When we compare the German Rentenversicherung [statutory pension insurance scheme] with pensions in the Netherlands, we see that part of the

And in the Netherlands there are no tax breaks on contributions to the Dutch state pension, while tax relief is given for second pillar contributions.

“The question is what to do when a person is posted for a certain length of time to another country Bollen continues to accrue pension in that country.” she continues. “Do we have to come to a mutual recognition of tax rules? If we can manage that, it will help to reduce one of the barriers and enhance labour mobility.”

The university will concentrate on the legal aspects of the pensions register, including tax law, as well as raising awareness of individual pension shortfalls.

The other two strands of the process will be design and implementation, and the operational system itself.

This means working with a number of other partners, because the different aspects require co-operation between the research function, including the university, and other organisations in testing how the register works in practice.

“The combination of different areas is also important,” Bollen says. “It is not a good idea just to think about solutions within a legal framework, without taking into account that people must be attracted into using the website. So you also have to work on an attractive layout which supplies people with their personal information.”

Could threats the Schengen agreement make the need for a cross-border pensions register less urgent? No, says Bollen: “The current weakening of Schengen makes ITEM’s work even more important, although of course we are taking the new developments into account.”