The building company and property developer Plegt-Vos is the first Dutch company to relocate its defined contribution (DC) pension plan to Malta. The cross-border scheme has a fully outsourced board as well as a conservative investment mix. And surviving relatives are to inherit pension assets if a participant dies during the accrual phase.

Jan Snijders, chief financial officer at Plegt-Vos, says that the move to Malta had been arranged by Dutch service provider Worldwide Pensions, “as their view on pensions appealed to us”. The consultancy offers tailor-made schemes for small and medium-sized enterprises (SMEs).

Plegt-Vos had been looking for some time for an alternative for part of its pension arrangements. Its building staff was affiliated with the mandatory sector pension fund BpfBOUW and its office workers were accruing a pension at insurer Nationale Nederlanden (NN) in a combination of DC and defined benefit (DB) plans.

About 80 staff in the higher echelons as well as the company’s board members qualified for a new scheme, in part because they were not subject to mandatory participation in BpfBouw. According to Snijders, 80% opted for new and more flexible labour conditions, including the new Malta-based arrangements.

One reason for the switch, the employer says, were “ever increasing costs” of the insured pension plan at NN. Snijders says that, although the company’s annual contribution of €500,000 had roughly remained unchanged, costs have become “manageable” now. Moreover, the Malta-based scheme offers additional flexibility as well as lower costs for the long term, compared with the usual Dutch DC plans, he says.

For example, Plegt-Vos has a considerable say in the investment mix as well as in the criteria for sustainable investment at Maltese asset manager Curmi & Partners. Currently, 90% of its €1m of pension assets has been allocated to fixed income. This is different from the usual lifecycle plans offered by the Dutch low-cost DC vehicles (PPI). 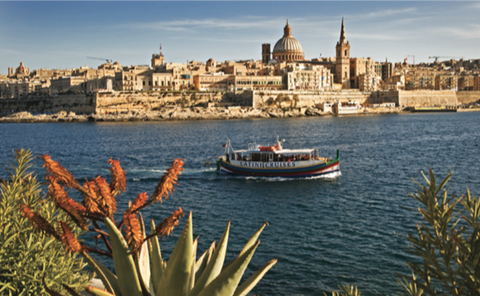 Valetta, Malta’s capital: The island is hoping to gain in significance as a cross-border pension desintation

“We are familiar with lifecycles as well as with the notion that young employees should take more investment risk,” says Snijders. “But 95% of our participants has indicated that they preferred a defensive approach.” The investment policy of the Plegt-Vos Retirement Scheme for the over-60s is even more defensive, with the interest risk almost fully hedged. The investment policy partly resembles a lifecycle.

Snijders adds that different scenarios explored by the asset manager, had suggested that there would be “little difference” in expected returns between defensive and offensive investment strategies in the long term. However, the fixed income portfolio also consists of high-yield bonds, aimed at surplus returns.

During 2014, the company’s pension plan yielded a “very decent” 5%, says its chief financial officer. He points out that the firm also wanted to avoid large asset fluctuations immediately after the relocation, “as our staff would not have understood”.

Jos van Wely, financial controller at Plegt-Vos, says the company’s intention was to raise the equity allocation together with increasing the scheme’s assets. Its strategic equity allocation is 20%, with the option of a further rise to 25%.

According Richard Cok, CEO of Worldwide Pensions, most companies considering  relocating to Malta aim for a securities allocation of 20% to 35%. “To the Maltese supervisor, 30% to 35% is the maximum,” he says.

The pension arrangements in the Plegt-Vos Retirement Scheme also offer more flexibility than the average Dutch provider, says Snijders. “It has, for example, the option that surviving relatives inherit the accrued pensions capital in case the participant dies during the accrual phase.”

According to Cok, this is possible because the scheme is allowed to pay the ‘death profit’ back to the company, which can subsequently decide to pay the money as a posthumous salary. Plegt-Vos has promised that it will always do so. In addition, participants also accrue a surviving relatives’ pension which is independent from any benefits paid from the  pensions capital.

Dutch pensions providers never pay back the ‘death profit’ to the employer, according to consultancy Aon Hewitt. “It is chiefly used to improve the pension rights for partners and orphans, or the pensions for the remaining participants.”

As the Maltese scheme is an Institution for Occupational Retirement Provision (IORP), it is simple to make cross-border pension contributions into the DC account if a worker is relocated to a company’s foreign branch, days Cok. “It isn’t necessary to close a pension plan in the country of departure and start a new one from scratch elsewhere.”

Plegt-Vos says that tax advantages, or a less strict supervisory regime, have not played a role in its choice for the Maltese option. It says the assets of the scheme have been placed with Dutch custodian Kas Bank.

Plegt-Vos has fully outsourced the board responsibilities to Worldwide Pensions which, it says, is also liable for mistakes. The board – consisting of three employees of Worldwide Pensions – meets a couple of times a year with the pensions committee of its client to discuss investment policy as well as interim adjustments of the pension plan.

“The Maltese supervisor MFSA appreciates if the board and the company’s committee meet in Malta at least once a year,” says Cok. “And although this is not compulsory, doing so would be a gesture of good will.”

Plegt-Vos says the costs of pensions provision at its Maltese scheme are at a similar level to the Dutch DC vehicle PPI. Van Wely: “The insurance and asset management are cheaper. At Curmi, we pay 45 basis points in asset management fees, against 50 to 60 basis points at a PPI. Moreover, this is an actively managed mandate with a party that has a thorough approach in our view. They are value investors, who meticulously read companies’ reports.”

The Dutch firm has concluded labour disability insurance and surviving relatives insurance with Amstelveen-based ElipsLife, a subsidiary of Swiss Re. “Because Plegt-Vos could choose the provider with the best offer for each individual element of the pension plan, we could save quite a lot of money on this,” says the financial controller. “With Dutch providers, it would have been compulsory to buy a package of the pension plan, asset management as well as insurance.”

On the other hand, a Malta-based scheme means higher board and administration costs. “Currently, the figures cancel each other out, but with the increase of the managed assets, savings will get the upper hand,” argues Van Wely. He makes it clear that his company had decided to fully pay the costs of pension provision, “as a compensation for staff for the loss of some security following the switch to DC”.

With the exception of the custodian Kas Bank, Worldwide Pensions does not work with fixed partners, Cok points out. “Our clients pick a provider from our long lists. As asset manager Curmi considers international IORPs as a promising option, it charges a favourable fee. It wants to invest in this market, gain experience and build up a reputation.”

When asked whether asset management could become more expensive in the future, Cok says he expect that the Malta route will not turn out to be cheaper than the Dutch low-cost DC vehicle PPI. “However, it will be cheaper than running a company pension fund. And participating companies will have the advantage of a tailor-made approach for the same costs as a PPI.”

More companies in the cross-border pipeline

Worldwide Pensions already drew attention five years ago, when it launched the MKB-pensioenfonds for small and medium-sized companies through a Maltese vehicle under the IORP Directive. At the time, the consultancy was already discussing its option with Plegt-Vos.

Richard Cok, the consultancy’s CEO, attributes the long starting phase to the fact that interested companies had to wait for their existing contracts to expire. “We also had to put a lot of effort into designing the plan in co-operation with the employer and the works council, as well as into selecting the insurer and the asset manager.”

He adds that the application process was also time-consuming. “In the case of Plegt-Vos, it took the Dutch regulator DNB and the Maltese watchdog MFSA four and nine months respectively to approve the cross-border arrangements. However, I expect this process to be quicker in the future, as the supervisors get used to it.”

Currently, Worldwide Pensions is in advanced negotiations with an agricultural firm with 70 staff, about a Malta-based pension plan, says Cok. He adds that he expects to submit the application for the second retirement scheme during the course of this year.

Cok further indicates that two other medium-sized companies are internally discussing whether to opt for a Maltese IORP.