Currency Management: Below the volatility surface

Exchange rates are usually hard to forecast, and sudden movements in their levels can have important effects in portfolios of foreign securities. In this article we show how to use option prices to infer implied market probabilities of future exchange rates.

The fair pricing of derivatives is based on the notion that two assets that are perfectly negatively correlated can be used to form a portfolio that is risk-free. The return of such portfolio should be the same as a risk-free asset since otherwise there would be an arbitrage opportunity. Recent research shows, however, that it is not possible to hedge options written on assets that may have extreme movements. In other words, if a currency can jump suddenly from one level to another, as is often the case during economic crises, then option prices for each strike are determined exclusively by supply and demand. Such prices can then contain important information about market expectations of possible extreme movements in future FX levels.

Currency option premia are usually expressed in terms of volatilities. This is because the most widely used option-pricing model for currencies, the so-called Garman–Kohlhagen model, assumes that volatility is constant and hence establishes a one-to-one relationship between prices and volatilities. Industry participants usually express prices as the level of the implied volatility that, if used in the Garman–Kohlhagen formula, would give the correct option premium.

The collection of implied volatilities for different strikes and maturities is called the volatility ‘surface’. This surface is usually easier to analyse when the maturity is kept fixed. In that case, we usually plot the implied volatility of different contracts for different strikes. For currency options, however, it is usual to work with option deltas instead of strikes. The delta of an option refers to the sensitivity of the option premium to the underlying asset which, in our case, is a currency, and represents the amount of underlying asset that is needed to hedge the contract.

Figure 1 displays the implied volatilities, on 19 September 2013, for three-month options written on the EUR/GBP exchange rate. The horizontal axis represents different deltas for both call and put options. The deltas on the left correspond to out-of-the-money EUR call / GBP put options, whereas deltas on the right correspond to out-of-the-money EUR put / GBP call options. 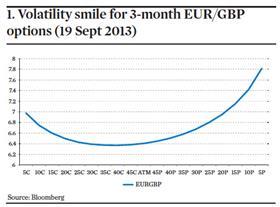 The chart shows what is often called a volatility ‘smile’, since the implied volatility of at-the-money options is lower than that of out-of-the-money calls and puts. The intuition for this result is that traders in the EUR/GBP option market know that the exchange rate can move abruptly, but ignore the direction of the jump. Hence, they bid up prices of both out-of-the-money calls and puts, and are willing to pay less for at-the-money options.

A different situation is depicted in figure 2, which displays the implied volatility on options written on the EUR/USD. This chart shows what is often called a volatility ‘skew’, since the implied volatility of out-of-the-money calls is lower than that of out-of-the-money puts. This means that traders are willing to pay more for an option that protects them if the euro depreciates substantially with respect to the dollar, rather than for an option that protects them against the opposite event. This is the shape that the volatility surface for the EUR/USD has displayed since the beginning of the euro crisis in 2011.

Figures 1 and 2 show that traders’ expectations on extreme currency events affect option prices, suggesting that it should be possible to quantify these expectations into event probabilities.

This is what figure 3 shows, where we have used Bloomberg’s FX rate forecasting mode (FXFM) to obtain implied three-month EUR/USD exchange-rate probabilities on 19 September. This is consistent with figure 2: the fatter left tail of the probability distribution indicates a higher implied probability for a depreciation of the euro. The figure also plots analysts’ expectations for the three-month level of the EUR/USD which also seem to agree with the tail-implied probabilities – a euro depreciation is anticipated.

Why is this interesting? Because the forecast from implied volatilities for a greater probability of euro depreciation contrasts with the expected value, or the mean average, of the implied probability density, which, on 19 September, pointed towards a slight appreciation of the euro. The expected value of this distribution, marked on the chart by the grey line, reflects the relative three-month interest rate differential between the euro and the dollar. 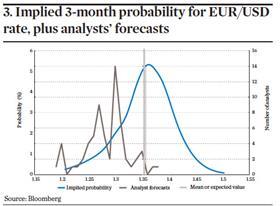 However, empirical studies have found that UIP does not hold well for many currency pairs, at least in the short run. Indeed, as our chart shows, the mean of the probability distribution (given by UIP) seems at odds with analysts’ expectations, but the tail probabilities (obtained from out-of-the-money options) agree with what analysts expect.

FX options seem to contain useful information about market expectations on future exchange rate movements – especially those that go against the apparently ‘fundamental’ rates suggested by UIP – that could be useful for market participants exposed to exchange rate risk.