Book review: The Signs Were There - Spilling the saucerful of secrets

Tim Steer’s romp through the world of dodgy accounting practices and share price debacles is beyond shocking. He brings together his forensic examinations of publicly quoted companies’ accounts, and demonstrates clearly that “the signs were (indeed) there” in a way that induces reader incredulity.

Although most of his examples are smaller UK companies, not all are, and the underlying principles are universal. Anyone involved in the stewardship of capital – investment managers, pensions professionals, and certainly every practising accountant – should be forcibly made to read this book. 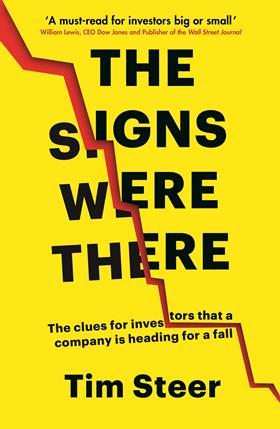 The Signs Were There
By Tim Steer
Profile Books, 2019 (second enlarged edition with a chapter on Woodford Investment Management) Christopher Walker

Tim Steer is no ordinary City professional. Originally a sound engineer with pop groups including Pink Floyd, he morphed into an accountant, then an investment analyst, and finally a successful fund manager. This unusually rich background positions him well to analyse dubious accounting and the subsequent share price consequences. Steer has a razor-sharp mind that can see patterns others miss. And not just in numbers.

One of the more bizarre aspects of this triumph of number-crunching is the accompanying corny word plays. He cries “timber!” when software specialist Cedar Group’s share price “falls”, while Patisserie Valerie’s shares sell “like hot cakes”, and the debacle at IT specialist Redcentric leaves “red faces” that ignored “red flags” that took them “into the red”. I tallied this distracting persiflage into triple digits, then gave up praying for a firmer editor in future editions.

And next edition I am sure there will be. Because if this wordplay, and the little cartoons at the top of the page, are an attempt by the author to keep our interest, they are unnecessary. Steer’s story is good, even gripping. He demonstrates that investors must “cut through the gloss and propaganda of the first sections of any public company’s annual report, and get to the nitty-gritty, the nuggety bits in the numbers towards the end of the document”. Here “cash is fact…. everything else is a matter of opinion”.

There are some appalling examples of that “gloss and propaganda”. The “effortless, nonchalant, why-did-he-bother” statement from the chairman of Cattles, a small-loan specialist and former FTSE 250 constituent, praising “robust credit quality.… and financial efficiency.” Shortly before a profit of £165m (€195m) was restated as a loss of £96m. But it is mainly down “at the back” of the accounts that Steer unearths all kinds of shocking malpractice, underlining his “cash is king” point – although even that must be examined carefully in accounts. Patisserie Holdings, the parent company of the aforementioned Patisserie Valerie, claimed £29m cash yet suspiciously received zero income from it.

The sheer inventiveness of crooked accounting is striking. UK software start-ups Cedar Croup and ISOFT used estimates of “accrued income” to create imaginary profits. Connaught, a UK maintenance outsourcing expert, discovered the trick of capitalising the wages and salaries of its own workforce before going bust owing hundreds of millions. The KPMG administrators found 50,000 unpaid invoices at Connaught’s Leeds office.

The appalling instances of what Steer calls “playing Happy Families” stand out. At Connaught, despite the lack of true cashflow the company was apparently sponsoring the chairman’s son as a racing driver.

At Erinaceous, a ‘one-stop’ property services company, the CEO’s wife was both the company secretary and its lawyer, while her sister was chief operating officer (all three of them apparently living in the same house). They pushed ‘related party transactions’ to the limit, selling company assets to directors at valuations they themselves determined.

Erinaceous (which  means hedgehog like) was too good an example to leave out.

Outside the world of UK small and mid-caps, the creative use of acquisition accounting at Hewlett Packard is wonderfully ridiculed. The $11bn (€10bn) purchase of software company Autonomy was followed by a later impairment of $8.8bn.

Steer also examines Toshiba’s shocking $1.9bn (40%) overstatement of profits over seven years, as senior management “challenges” led their subordinates to simply cook the books. However, the reader will have to look elsewhere for any examination of the cultural mores behind “challenges” in Japanese business.

And some of Steer’s assertions are arguable. For example, while it is tempting to conclude that Patisserie Valerie’s 87-day “average age of inventory” might appear laughable “stale cakes”, consideration should be given to frozen products and raw materials (he admits that at Costa Coffee the equivalent figure is still 28 days).

Such criticisms are mere quibbles. This is an excellent book, with important implications. One being whether investors should bother with IPOs. Steer showcases the inventory write-down sportswear retailer Sports Direct conveniently took the year before its IPO. And how the IPO of pet food specialist Pets at Home on the London Stock Exchange followed a one-off “transformational” leap in margins (to an astonishing 52%) already banked by the sellers. The IPO investors joined the party as the alcohol ran out and the DJ was winding up.

There are many villains and incompetents in this book, not least the assembled auditors and finance directors. David Miller, finance director of UK support services company Amey, apparently assessed new accounting standards as appealing as “a little cup of sick and I’m not going to drink it”. After he resigned, the new finance director wrote down assets previously recognised as income and reported a loss of £129m, which subsequently rose to £224m.

Investment managers are also ridiculed. If only they had “browsed through” accounts or even taken “a cursory look”.

In this revised edition, there is a new chapter on the Neil Woodford scandal which sits uneasily with the other material but is nonetheless fascinating.

The illiquidity in his fund was obvious to anyone who made just a brief analysis. The average market cap of his previous fund (at Invesco) had been £47bn; now it was only £2bn. Worse than this, 10% was in unquoted securities and, as Steer points out, that was more like 20% as “four companies…. were listed on the Guernsey stock exchange, a ruse that fooled no one”. Or rather it did, including leading investment advisers, who also seemed oblivious to the fact that this “income fund” had hardly any income.

Steer concludes with the usual worries about the concentration of UK auditing in the hands of the ‘Big Four’, a plea for audit committees to “step up to the plate”, and for regulators to stop being the Keystone cops who always arrive late to the scene of a crime. Embedded here is an appeal for politicians to act. UK companies are obliged to change their auditors only every 20 years and it is clear that the root of the problem is that the companies choose and pay the firms that audit them. This must be tackled.

As Steer observes, institutional investors (and pension funds) must “do more to ensure the soundness of the business in which they are investing – including choosing the auditor and perhaps even the audit partner”. Now there is an idea.