Books: It all boils down to the three Ds

He has an extraordinary ability to source a good idea from a hundred different places, a trait which at times can leave the reader spinning. But, when was the last time you read a book on fund management that skipped effortlessly from the bearpit of an American baseball stadium to Gustave Flaubert’s literary novels?

There are plenty of reasons why we should be interested in hearing what Paul Marshall has to say.

He has enjoyed enormous success, founding one of Europe’s largest hedge fund firms, Marshall Wace, and propelling it into the super league, managing nearly $40bn (€33.5bn)now. This achievement has earned him a fortune, reported to be about £630m (€700m). For those of us who previously thought we had enjoyed successful careers in fund management, this is humbling. 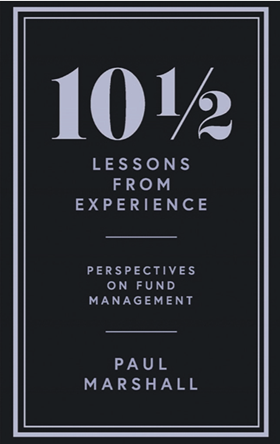 Marshall is also well known on the UK political scene – initially as a moving force behind the ‘Orange Book’ liberalism that characterised Nick Clegg’s leadership of the Liberal Democrats between 2007 and 2015. More recently, he morphed into a Brexiteer, a cause which led him to desert the Liberal Democrats and support Boris Johnson. He wrote strongly pro-Conservative opinion pieces during the 2019 UK general election across the media.

He is no stranger to writing, or perhaps more accurately ‘editing’, having co-edited The Orange Book: Reclaiming Liberalism, as well as an influential tome on educational reform, The Tail. He admits to being more comfortable editing than writing, which perhaps explains why this is such a short book. If you ever take a transatlantic flight again you’ll ‘inhale’ it before you take off.

Which is not to deny it is an amusing read, although one which gallops through so many subjects it requires concentration. Marshall’s ‘hinterland’ is on full display, and is truly ‘renaissance man’ in its breadth. Skipping effortlessly from Yogi Berra

to Flaubert, with a significant measure of John Stuart Mill and David Hume thrown in. Numerous economists and portfolio management theorists do appear, but seem like ‘also-runs’ in the thrust of Marshall’s narrative.

We begin with a wonderful quote from US baseball ‘catcher’ Yogi Berra who tells us that: “In theory there is no difference between theory and practice. In practice there is.” This is a big part of what this book tells us about stock picking, and the basis of Marshall’s hymn to ‘talent’. Do not make the mistake of René Descartes and Jean-Jacques Rousseau and “start with axioms and then seek out the evidence to prove them”. Because, switching to Field Marshal Helmuth von Moltke for a moment (the quotations come at dizzying speed but, heck, why not), “in war as in art there exist no general rules; in neither can talent be replaced by precept”. This seems a bit rich as the leitmotiv of a book of .…err…. general rules, but clearly Marshall believes that fund management is an art, and who is to disagree with him?

Marshall has a lot to say on talent. He asserts that “efficient market theory is so far removed from working reality that it has become the butt of many jokes”. A market is just an amalgamation of human behaviours and as Blaise Pascal tells us, “the heart has its reasons”. Thus we canter through various human weaknesses ‘optimism bias’, ‘gambler’s fallacy’, ‘confirmation bias’, and simple ‘overconfidence’. Marshall argues these all create opportunities for those with talent, and he rubs his hands when he considers all the stupidity there is around because as Flaubert promised “stupidity does not give way to science, technology, modernity, progress: on the contrary it progresses right along with progress”.

But before you conclude Marshall is a disciple of Freidrich Nietzsche (one of the few philosophers not mentioned in this little book), note his belief in “supermen” (and presumably women) is strictly disciplined and observational.

As any investment analyst who pitches ideas to Marshall Wace will tell you, they have developed a rigorous system for monitoring those ideas – TOPS (Trade-Optimised Portfolio System). If you come to this book seeking the secret of Marshall’s success then TOPS is the closest you will get to it. The details of how it works are not given here (indeed the details of no subject are given here) but you get the gist. Interestingly Marshall notes that “the reddest flags for underperformance in TOPS are problems in people’s personal lives – the three Ds of death, divorce and disease”.

But, as you would expect from a hedge fund magnate, Marshall’s belief in talent does not obscure his love of quants. As he says “a machine beats a man, but a man plus a machine beats a machine”. He asserts there is a space between fundamental and systematic investing which he calls “Quantamentals.”

It is no surprise to learn that Marshall Wace processes over seven petabytes of data every day. The expectation is that this will rise to 20 because “the ability to harness and deploy technology will be one of the most important determinants of long-term competiveness in the investment industry”.

Other things are more surprising. Marshall argues leverage should be applied in moderation and liquidity must be watched, as these two so often “bring down the curtain on poor fund managers”. Apparently the maximum leverage of any Marshall Wace fund is “only” 400%. And as a firm they never own more than 5% of a company’s free float. A no-doubt challenging discipline at times for a firm of their size, if one which in my experience appears generous given the illiquidity found in smaller companies.

What is more astonishing is that the most detailed and strongly argued chapter in the book, is the one that outlines the dangers of shorting. Indeed, anyone reading that lesson would be tempted never to short again. Not just because of the enormous cost of the carry – which Marshall estimates at 48 basis points – and the theoretically unlimited losses in any position, but also the obvious market risk (he tells us the average bull market lasts 6.9 years, the average bear only 1.5). And as he says – “when a short position goes against you it grows in size and becomes more of a problem for your portfolio”.

This is all the more surprising when you remember that among Marshall Wace’s most daring recent coups was the £50m they apparently pocketed from shorting leisure stocks as COVID-19 struck. They reportedly held half the declared short-selling contracts in travel firm TUI and the entire short position in hotel group Intercontinental.

Marshall’s final lesson is that “most fund management careers end in failure”. Not in his case.