2
Briefing: A time to be calm and focused
Current edition

Briefing: A time to be calm and focused

The corona pandemic has become an emotional rollercoaster for investors. First, came the market collapse, followed by panic sales. Then, hot on the heels of the turmoil, normalisation and new stock-market highs.

However, during this storm, German institutional investors have kept their cool and, for some time now, have been focusing on greater diversity through alternative forms of investment and real estate.

With interest rates at stubbornly low levels, the appeal of Spezialfonds – Germany’s equivalent of institutional special funds – has remained high, as shown by developments on the Universal-Investment platform. As of 30 June 2020, the €347bn of investments analysed on the largest fund services platform in German-speaking Europe had more than tripled in value since 2012.

The pandemic crash caused a brief 3% fall from January to March, but business recovered quickly, and volumes have now even surpassed those of late 2019. In the ninth year of the Universal-Investment’s monthly 360 Degree Analysis, investment volume has again risen strongly, this time up 7.8% from €322bn a year earlier.

Hunt for diversity
Zero interest rates with no prospect of short-term improvement, combined with high stock-market volatility, stimulated a new ethos of greater investment diversification. As a result, pension funds, insurers and corporates have over the past 12 months been turning increasingly to real estate and alternative investments for their portfolios.

The analysis of the Universal-Investment platform shows that €51.9bn – roughly 15% of total investments – are held in alternatives (figure 1), equating to 125% growth in little over three years. Equity structures account for the largest weighting at 60% and, within this segment, the greatest demand is for private equity. Debt structures, such as infrastructure project financing and municipal loans, constitute 19% of alternative investments in the analysis.

The share of real estate investments accounts for over 6% of overall assets on the Universal-Investment platform, and as of 30 June 2020, a total of €21.6bn was invested worldwide in construction projects, such as commercial buildings for retail and hospitality, offices and residential buildings. As this is a long-term market, it is too early to speculate about the potential impact of the pandemic.

This asset class, too, appears to be enjoying a broader internationalisation of investments: although a large proportion, 37%, remains invested in Germany, the rest of Europe follows closely with 29%, and North America with 21%. Asian construction projects have also grown strongly in recent years, accounting for 11%, and properties in Australia, for 3%.

Less demand for bonds, equities
The equities share of Spezialfonds also benefited from the favourable stock market conditions following the 20.4% low precipitated by the crisis in late March. Between March and June, this share rose 2.4 percentage points to €79bn – or to 22.8% of total investments (figure 2) – thereby largely making good the drop in share prices caused by the crash.

Over the long term, however, equity exposure has been decreasing in percentage terms as total volume has increased. The average equity backing ratios are far from their peak levels of around 30% of total assets over the period 2015-17. This indicates that fund managers have become increasingly cautious in view of the worsening economic prospects and increased global risks – not just since Covid-19.

Methodology and relevance
The full analysis encompasses investments in Spezialfonds at Universal-Investment over the period January 2012 to 30 June 2020 and is updated monthly. The total volume of analysed assets under management is currently about ˇ347bn or 18.6% of the total Spezialfonds assets covered by the German Association for Investment Fund Management Companies and Investment Funds (BVI) at the end of May 2019.

The share of bond investments on the Universal-Investment platform was 41.8% at the end of June. In percentage terms, this is only a slight fall compared with March, and corresponds to the level at the beginning of the year. The share of bonds was up slightly in February and March at 43% and 42% respectively. However, this was only due to the much larger decline in the equities segment; €145bn are currently invested in the bond segment.

Year-on-year, though, the share of bond investments continues to fall from the levels at the end of June 2019 when they still accounted for 43.2%. With negligible interest earnings for the foreseeable future, institutional investors will increasingly struggle to reconcile the challenge of generating yields for their regular long-term payouts with their mandated risk profiles.

Government bonds stable
Within the bond segment, the share of both corporate and government bonds has remained stable, each at slightly over 26% of the total volume (figure 3). This contrasts sharply with the situation three years ago when corporate issues were in great demand and, at 34%, accounted for a much larger share than the 23% for government debt. But as investment-grade companies can now also borrow at almost 0% interest, professionals are increasingly being attracted by the perceived safer haven of government bonds. Despite low or even negative returns, these now account for about 11% of total investments, or €38bn and, just three months after the pandemic outbreak, German government bonds were in even greater demand than a year ago. When sovereign issuers are analysed in detail, an international mix emerges: at the end of May 2020, German Bunds accounted for the largest share of the segment at 28%; these were followed by the 26 emerging markets covered by the MSCI EM index, which together account for 13% of all government bonds; US Treasuries accounted for a further 12%, France 10% and Spain and Italy each 5%.

Smaller bond holdings of rather exotic sounding issuers, such as Iceland and Israel, have grown since the start of the year, while holdings in the government bonds of Argentina, Bolivia, Iraq among others, have declined. 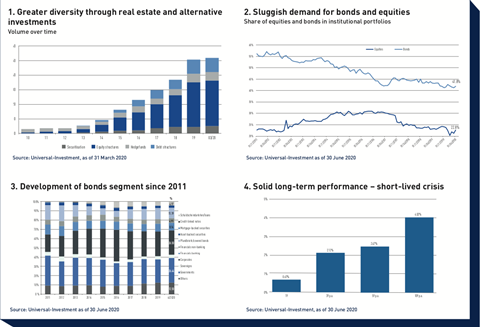 The bond-to-equity ratios of the many investor groups on the Universal-Investment platform vary greatly, depending on the individual strategies, investment goals and regulatory requirements. The two largest groups – both types of pension vehicle – have lowered their bond allocation slightly from 31% to 29% and their equity exposure from 26% to 23% over the past three years, while increasing their real estate investments by one percentage point to about 9% over the same period. Corporates have remained true to a mix of 50% bonds and 30% equities over the years, although the proportion of equities has recently declined to some extent.

The third largest group – insurers – have trimmed investments in both asset classes since summer 2017 and are currently operating at a ratio of 32% equities to 47% bonds.

Long-term focus beats crisis
The corona pandemic put pressure on short-term performance over the past 12 months. While average year-on-year performance at the end of June 2020 had recovered strongly to 0.67% from the negative 3.25% measured at the end of March, the 10-year comparison in which institutional investors generated a stable 4.02% per annum is solid.  In particular, investments in private equity, which appreciated 6.3% per year over a three-year period, and in real estate, up 5.8% over the past 12 months, helped stabilise the overall performance.

While intensifying the diversity of their investments, professionals are also increasingly using yield-enhancing as well as hedging strategies such as overlay management. These instruments have served fund managers well, especially during the current crisis. Together with prudence and long-term investment horizons, they have succeeded in implementing resilient strategic asset allocations. Decision-makers in the Spezialfonds segment have again proven: when the going gets tough, it pays to keep cool and stay focused.