The enormous scale of national lockdowns has made it hard to keep abreast of all the extraordinary monetary interventions and fiscal support packages worldwide.

The Bank of England is ready to directly fund the UK Treasury’s spending needs by expanding the government’s overdraft facility. Although the move was presented as a temporary measure, it may represent the world’s first monetary financing of government. It is reassuring knowing this facility has been used before, in 2008 when £20bn (€22.6bn) was advanced. However, the Bank will need to make sure that it is seen as a one-off response to these extraordinary times.

While policymakers may have surprised, in a good way, with the speed and magnitude of rescue packages, economic data has, conversely, repeatedly proved worse than expected. Employment data has been shocking, with US jobless claims coming in considerably higher than expected, week after week.

The goal for policymakers is not just about keeping the lights on and nations fed, but also finding ways to ensure that demand can and will eventually pick up, that it is sustainable and ensures recovery momentum can be maintained.

In truth, the depth of the economic damage caused by dramatic actions, both official and unofficial, in reaction to this pandemic may not be quantifiable until long after the dangers posed by the virus have been contained. Veteran fixed income investor Mohamed El-Erian likens the phenomenon of such “massive declines in consumption and production” to those of “fragile/failed states and communities devastated by natural disasters: an economic sudden stop, together with the cascade of devastation that can follow from it”.

Will the term premium rebound?

Term premium describes the compensation demanded by investors for buying (credit-risk free) long maturity bonds rather than shorter maturity bonds. It is a significant contributor to longer term bond yields. As a theoretical concept, it is not easy to calculate, though there are several reputable sources, such as from the Federal Reserve Bank of New York* which estimates term premia for various maturities.

Over the last decade, much has been written about the flatness of government yield curves across the developed world, and why term premia have fallen so much and indeed are, for longer maturities, now negative in many markets. As well as the global search for yield, another significant factor is the lack of inflation or, more specifically, the lack of inflation shocks. 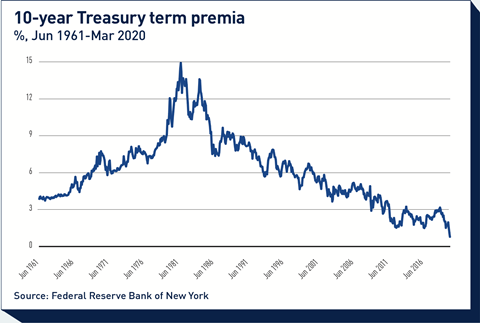 As the extraordinary developments in the world as COVID-19 lockdowns continue, and enormous quantities of renewed quantitative easing (QE) begin, assessing the term premium becomes harder. This is true when new ‘norms’ become established. It is interesting to note that prior to the global financial crisis, inflation and risk asset prices tended to be negatively correlated. However, after 2008-09 a new paradigm emerged where the reverse is true.

Over the last few years, before the arrival of COVID-19, a variety of economists have predicted that the term premium may be coming back, in particular pointing to the central bank’s withdrawal from QE which could relieve some of the significant downward pressure on longer term interest rates.

However, in the same way that the global financial crisis has inverted the inflation/risk appetite relationship it may well be that COVID-19 will change a huge amount. It may be that the scale of interventions have to remain or be further topped up for an unknown time into the future. The inputs to term premium forecasting, and bond investing, may become even more complicated.

Bonds
In mid-January, the St Louis Fed Financial Stress index fell to a negative 16.2, its lowest level since it was created in 1993. It had been pushed lower by the Federal Reserve aggressive response to last September’s repo problems.

A dangerously perfect calm before the storm, as the index is once again extremely elevated, driven up by the precipitous falls in equities and the wider spreads in credit and the funding markets. It soared to levels last recorded in the midst of the global financial crisis.

While this index, and others like it, provides a reasonably authentic snapshot of the orderliness, or otherwise, of financial markets at any one given time, it is by design retrospective and not predictive.

Bond markets, both government and US credit in particular – as the Fed sought to support flows to businesses and local government – seem to be responding well to the policy annoucements. Liquidity pressures are easing and funding spreads narrowing. It has been made clear that more will be forthcoming if sentiment or conditions take another downward lurch.

Looking back to 2008-09 may provide a roadmap for guidance as to how to avoid a financial crisis. However, the capacity for this pandemic to generate devastating economic damage remains serious. For now central banks are in survival rather than economic management mode.

Currencies
Almost exactly a decade ago, the Economist magazine published an article entitled “The euro’s existential worries”, in which the first sentence asked: “Will the euro exist in 10 years’ time?” We know the currency survived, thanks largely to the European Central Bank (ECB) and its ‘whatever it takes’ mantra.

Now, in 2020, many observers, including at the Economist, are wondering if the world’s current extreme stresses, once again shine a spotlight on some of the euro-zone’s problems. The well-publicised difficulties EU members had in reaching agreement on bailout plans may reveal an uncomfortable lack of cohesion between the nations and potentially to the survival of the common currency.

April 10th’s package of measures from the EU’s finance ministers has gone some way to providing support for EU members, and in its size and scope has, arguably, reduced some tail risks, However, the lack of fiscal transfers from the strong to the weak leaves the highly indebted countries in a predicament: could debt levels rising further in Italy, or Spain, or maybe France, trigger another investor panic about potential default or debt restructuring? This is not the best recipe for a currency to appreciate.

On the other hand, this unprecedented instability and uncertainty is proving to be supportive for the broad US currency index despite some outsize gyrations and huge liquidity boosts from the Fed. During the recession in 2008-09 the dollar – though weakened at the onset of the global financial crisis – went on to strengthen significantly, as ‘risk-off’ behaviour set in.

As well as benefiting from safe haven status in the face of such omnipresent dangers, the dollar has been supported by ongoing large flows into the world’s largest risk-free market, US Treasuries. Owing to its status as the world’s main international currency, the dollar appears to be being pushed higher by a surge in international dollar funding moves, as the world unwinds its trades. Although the Fed’s swap line eased some of these pressures it is likely that funding related flows will remain elevated. 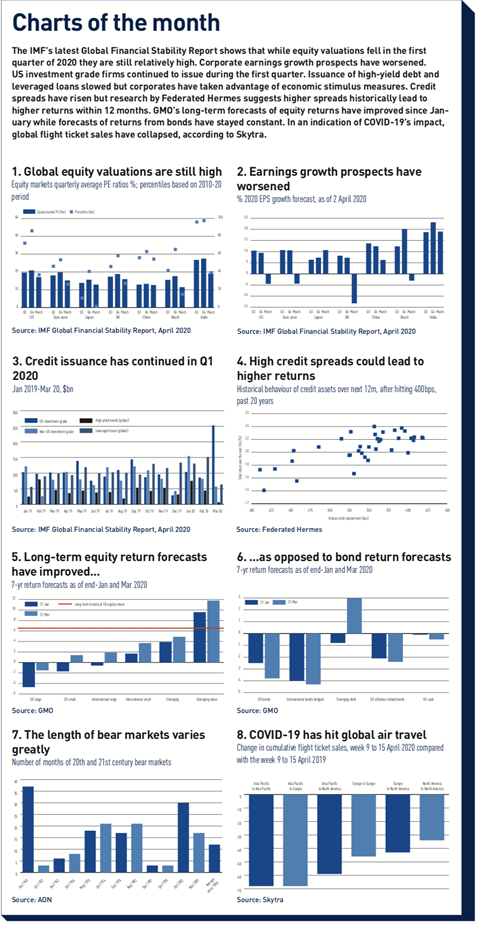