The war in Ukraine has reached stalemate. Neither party is capable of a surprise win, but time works against Russia. Can Zelensky keep the army motivated to continue? A long, hot European summer

is driving home the realities of climate change, while the US is floating back to sterile bickering and partisan inaction. US legal changes on abortion have deepened the values gap with European nations, gnawing at trans-Atlantic co-operation.

Analysts were surprised by the larger than expected increase in US interest rates, while reacting positively on Boris Johnson’s departure. Meanwhile, worries on inflation or central bank over-reaction seem to be increasing.

If asset prices seem uncorrelated, expectations are also divided, but in a more logical way. In the current circumstances, one can be optimistic on bonds or pessimistic on equity. The first approach reigns in the US market, where bond expectations are now close to zero, while in the EU equity expecta- tions remain significantly lower than in other regions and are now below zero.

This dramatic divide is the logical consequence of a difference on longer-term perspectives, fed by views on the effects of the Russian war. The divide is a major opportunity to invest in accordance with or against the majority view.

Last month, in all regions, the neutral vote on bonds had risen above or looked set to rise above that on equity. Markets seem to have had second thoughts this month. Net bond sentiment ranges from -31 to -34, except in the US, where it stands at -4.

Net equity sentiment is down in all regions, except the UK, which may have to do with the end of a period in which the UK will be on hold, as Johnson will eventually step down. Net bond sentiment is still rising, except in Japan, where it remains eerily stable. Are the EU equity figures or the US bond expectations a foretaste of things to come? That is the elementary question for the coming weeks. 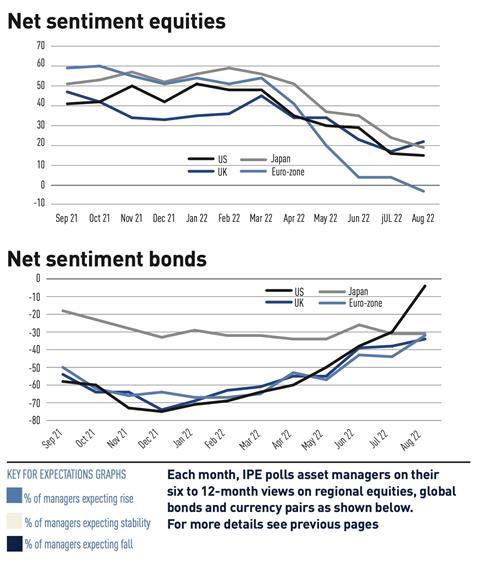