Light at the end of the tunnel?

Peace in Ukraine remains a (positive) risk, although neither party seems prepared to make the necessary concessions. Sanctions are hitting both sides, but Russia harder than NATO countries: expected Russian growth in 2022 is minus 8-10%, expected inflation 18-23%. Ukraine is hit even harder but can expect financial support.

There was little uncertainty about the planned increases in interest rates, so markets reacted smoothly when those plans became reality. The next stage will be looking for the effect of the increases on inflation and growth.

Inflation and rigid wages are stirring up social instability that may result in loss of credibility of national leaders. In the UK, political scandals strengthen this effect, while in the US it is strengthened by divisiveness. By contrast, the EU has found new purpose through the Russian war.

The loss of faith in equity and the rise of expectations for bonds look like a continuation of the trend of the past five months, but there are some unusual events, all happening at once that might signal an expected change in regime. Net euro-zone equity expectations have stalled just above zero. In all regions, the neutral vote on bonds has risen above or is set to rise above that on equity.

Net bond sentiment has reached -40. This does not just close the longstanding gap between Japan and the other regions. US net bond expectations rose even above those of Japan. With record government debts and a fear of default only for the weakest countries in the euro area, bonds are getting close to being attractive again. In addition, real estate prices are rising, which is bad news for the most important bond alternative, mortgages.

Net equity sentiment is down for all regions, with the euro-zone less of an outlier, while bond sentiment is still rising, with Japan ceasing to be an outlier. The cohesion in expectations leaves less room for country plays and may be a wait-and-see game that can change rapidly with new information on growth, inflation and political risk. 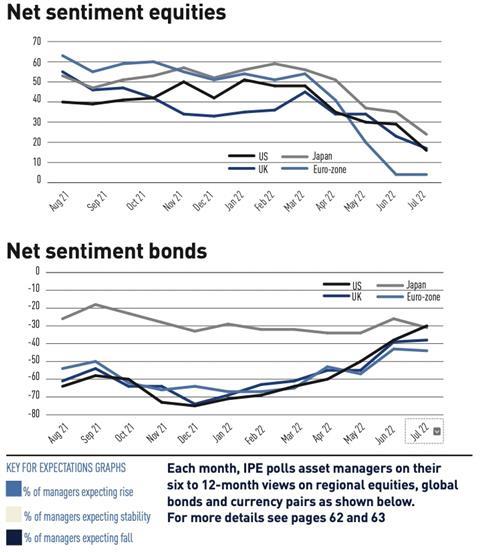