After years of relative calm, markets are bracing for a much bumpier ride in 2022. Soaring inflation, rising interest rates and ongoing uncertainty over the direction of COVID-19 are just a few things on the agenda. However, for some hedge fund strategies, such as global macro, volatility is a perfect backdrop – although managers will have to widen their opportunity set this year.

Macro funds rely on price anomalies, widening spreads and arbitrage opportunities generated by high volatility and tumultuous trading conditions in fixed income, currencies and commodities, and sometimes stocks. They are driven by the fundamentals, which is why they have not had an easy ride over the past 10 years.

They thrive on bad news and market shocks, but there have been long fallow periods punctured by unexpected events such as the financial crisis, the Italian bond debacle in 2018 and now the pandemic. They all triggered central banks to inject significant sums of money into markets and keep interest rates at rock bottom levels, which dampened bond market volatility and, in turn, hurt macro managers’ ability to generate returns.

Last year, macro hedge funds saw a window of opportunity in the so-called reflation trade. Many bet that the US Treasury yield curve would steepen as economies emerged from lockdowns. Growth and inflation would accelerate, and longer-term bonds would sell off, pushing yields higher. Portfolios were positioned to take advantage of the changing landscape but, unexpectedly, there was a rally in US government debt that pushed Treasury yields to multi-month lows.

The losses started to pile up last summer when the Federal Reserve became less sanguine about inflation being transitory and turned more hawkish about raising interest rates. The result was that performance for 2021 was disappointing, according to Kier Boley, co-head of the alternatives investment solutions team at UBP. The HFRI Fund Weighted Composite index was up 10.3% but breaking this down, discretionary macro fared the worst, posting a gain of only 2.9% for the year (see figure).

Boley adds: “Macro is the most opportunistic and fastest to adapt to changing economic conditions. They should have had a strong year in terms of relative performance against other hedge fund strategies but that was not the case. 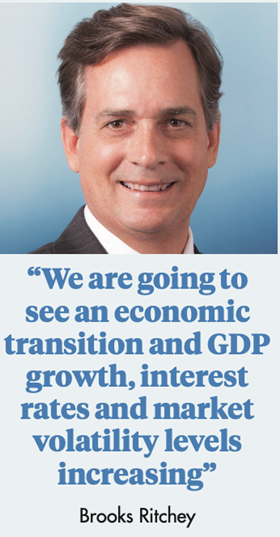 “They were ahead of the central banks in terms of what was happening with inflation but when the Federal Reserve turned more hawkish, and the market went against them, the short-rates inflation trade was very crowded.”

Christopher Reeve, director of risk at Aspect Capital, agrees, adding: “The economic environment provides the foundations for opportunities to emerge, but managers will have to be good at calling them correctly because it is difficult to predict timing as well as market direction. Take last year with the reflation trade – people were caught out in February, June and October.”

However, the consensus is that this could be a good year for macro funds because volatility is here to stay – with higher inflation and interest rates being firm fixtures in the economy. Heinrich Merz, head of hedge funds at Pictet Alternatives, sums it for many: “Inflation is expected to be more persistent and now supersedes the supply chain issue that people were focusing on. Attention now has turned to what the central banks will do.”

Brooks Ritchey, co-CIO at K2 Advisors, the hedge fund advisory group at Franklin Templeton, also believes monetary policy will tighten and quantitative easing will be withdrawn. “People have gotten used to low inflation, low interest rates and excess liquidity,” he says. “Our view is that we are going to see an economic transition and GDP growth, interest rates and market volatility levels increasing.”

The pressure is on for central banks to act. Overall, the euro-zone has reported a record headline inflation figure of 5%.

The UK just reported much loftier levels than expected. At 5.4%, it is the highest rate in 30 years, while in the US, inflation climbed to 7% at the end of 2021.

The Bank of England already made a move to hike interest rates to cool the economy, while the Federal Reserve made a sharp u-turn in January. After spending most of the pandemic promising to hold off on tighter policy so that employment can recover, it has signalled there could be three or four rises on the horizon for this year.

The European Central Bank, on the other hand, has resisted calls to dampen the economy, while some emerging markets, most notable China, are going in the opposite direction. The country just cut interest rate to boost a slowing economy.

A recent report by K2 Advisors notes that investors are looking to hedge funds to reduce volatility and increase flexibility in their overall portfolio, giving them optionality as markets transition to a new regime. Overall, analysts believe assets will be moved away from the fixed-income allocation into a diversified portfolio of uncorrelated hedge fund strategies, such as global macro as well as market-neutral equity, relative-value fixed income, merger arbitrage, convertible-bond arbitrage and CTAs.

Skilled global macro managers can particularly benefit from the divisions in markets, although if the reflation trade is anything to go by, they will have to be more thoughtful. Merz says: “There is no one size fits all and there will be managers who will do well and others that will get the trade wrong. It is a difficult strategy, and they will have to look at other ways to generate returns than the pure steepening curve.”

Looking at global macro specifically, Jens Foehrenbach, CIO at Man FRM, believes that on the discretionary front, managers will be able to generate returns from the transition to a tighter monetary policy and asset class volatility on the back of rising inflation. He is more cautious on the systematic macro side because policy changes can be more difficult to predict for systematic managers. In general, though, he recommends underweighting fixed-income relative-value trades due to the high leverage of these strategies, but would look at the dispersions between FX and rates discrepancies in markets.

From macro to relative value and convertibles

Taking a wider global view is also recommended. Donald Pepper, co-CEO of Trium Capital says: “It is important to go back to the first principles of diversification and look across the whole universe – both developed and emerging markets – for dislocations from the economic and political instabilities.

“Our global macro fund is 95% in currencies and rates, and we play the sovereign credit spreads, for example, between Argentina and Brazil, as well as Mexico and the US. We want non-correlated assets, so we largely avoid equities.”

Ritchey thinks that relative value long/short opportunities outside the US are also attractive in developed and emerging market equities. “We think that dispersion will increase due to a renewed focus on fundamental and macro factor variances,” he adds. “Hedge funds that can capitalise on these differences could generate good performance with a good, responsible Sharpe ratio.”

As for other attractive hedge fund strategies in the current environment, convertible arbitrage and merger arbitrage strategies are high on the list. The former, which consists of a straight bond that pays a regular coupon and an equity call option on the underlying stock is expected to benefit from continued robust issuance.

Research from Schroders shows that companies are racing to the market to ensure refinancing. Last year there was a record volume of $170bn (€150bn) of new convertibles issuance and Schroders predicts the figure will be around $165bn for 2022. The overall universe of convertible bonds has now grown to about $700bn

It is also appealing “because there are not that many players in this space”, says Darren Wolf, senior investment manager at Abrdn (previously Standard Life Aberdeen). “Most of the market is controlled by long-only institutional and retail managers and they would not consider an equity option on the underlying stock. It is an interesting strategy, though, because It replicates a synthetic put which is helpful in a market where you expect higher volatility and markets to sell off.”

As for merger arbitrage, the strategy is also expected to gain from a healthy pipeline of deals. There will not only be a bumper crop of traditional bread and butter M&A, but there should also be a spate of special-purpose acquisition companies (SPACs) trading at attractive discounted levels.

Markets saw a record $5.1trn in global M&A volume in 20201, according to Morgan Stanley, eclipsing prior records and a dramatic rebound from 2020, despite lingering uncertainty from COVID-19. The US bank is predicting another banner 12 months on the back of robust economic growth and corporates continuing to expand.

Some are also recommending commodity strategies. “The major unknown is the Omicron variant and the subsequent impact on demand going forward, particularly in the energy sector,” according to K2’s report. “This should provide a rich opportunity set on both the long and short sides for active commodity traders. A tight supply/demand environment should lead to relative value trading opportunities.”