Women in Denmark had pension savings at the end of last year that were 25% smaller than those of men, but there are signs they are catching up, according to a report from the Danish central bank.

Danmarks Nationalbank released pension statistics for individuals for the end of December 2018 showing women had average pension savings of just under DKK796,000 (€106,500), while men had more than DKK1.06m in their pension pots.

For both men and women, there was a wide divergence in the size of individual pension fortunes, the bank said, with age being the main factor.

There were a number of other factors determining pension size, it said, and these related to salary, collective agreements, savings rates and varying labour-market participation due to, for example, maternity and part-time employment.

The data revealed that among savers aged between 25 and 60, women made higher contributions than men relative to their salaries in 2018, paying in 12.3% on average compared to 11.3% for men.

“Women are, therefore, more eager to save than men, when the income base is taken into account,” said Danmarks Nationalbank. 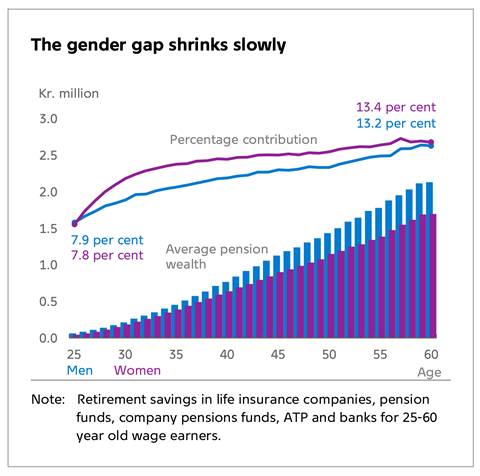 In absolute terms, however, men made average annual contributions last year of approximately DKK49,000 – 20% more than women, according to the report.

Over the past four years, women’s average pension wealth has grown by 7.8%, compared to men’s, which increased by 2.6% in the period, the data showed.

“The gap between the Danish men’s and women’s pension assets thus seems to be slowly decreasing,” the bank said, adding that from an international perspective, the gender difference was also smaller than in many other OECD countries.