UK defined benefit schemes saw the end of 2014 significantly impact funding levels, according to the Pension Protection Fund, as deficit levels hit their highest level since 2012.

The PPF is the UK’s support pension fund for corporate DB schemes where sponsors face insolvency.

The funding-level fall was a dramatic shift over 2014, with the schemes starting the year with an £8.7bn surplus, but slipping into deficit by the end of January 2014.

Across 2014, despite fluctuations in asset values, the aggregate value rose by 10%, with schemes ending the year with £1,237bn in assets.

However, the PPF said liability increases were at the foundation of the deficit rise, moving from £1,113bn to £1,503bn over the 12 months. 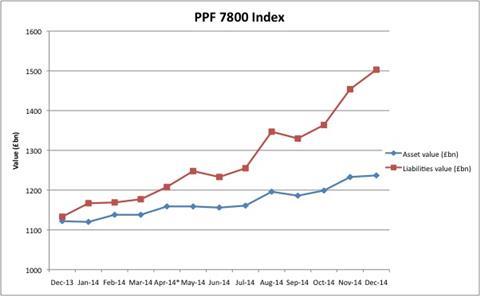 “When it comes to the cost of providing full scheme benefits, falling inflation expectations have done more to cushion the impact of lower bond yields,” she said.

The PPF’s universe of schemes operating a surplus fell to 1,121 from 2,641 over the year, with the remaining schemes in deficit posing a £300bn funding shortfall for the fund.

However, PPF modelling suggests it is more than capable of meeting its obligations.

Last summer, in its annual report, the PPF said its plan to hold enough assets to cover liabilities, with a 10% buffer for future claims, was 90% likely to be achieved by 2030.

Despite a significant fall in funding levels over 2014, the surplus seen at the start of the year was an unusual blip in positivity, with the last aggregate surplus seen in July 2011.