UK pension funds could be reaching a “tipping point” into cashflow-negative status, data from the Office for National Statistics (ONS) suggests.

The ONS recorded a net disinvestment of £15bn (€17.3bn) by pension funds and insurance companies in the third quarter of 2016.

It was only the fifth time in 30 years the ONS’s survey of institutional investors recorded net outflows but the second time in three quarters after a net disinvestment of £3bn in Q1 2016.

“There are two reasons for the disinvestment,” Kelly-Scholte said. “One is a tactical play: Investors see toppy valuations and a reflationary environment coming back, and they think they have got to have cash while this plays out.

“This doesn’t explain it all. Either [pension funds] are not reinvesting income, or they’re selling assets. That money is coming out of the long-term asset pool. It will be very interesting to see if it’s a tipping point.” 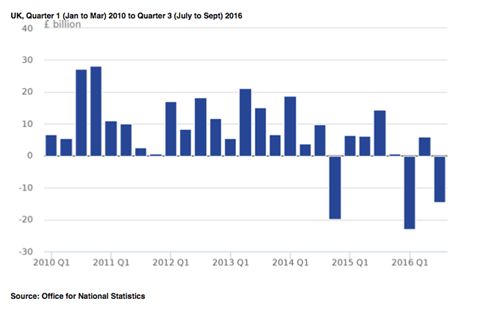 While similar patterns were observed in the ONS’s data at times of market stress – the bursting of the tech bubble and the peak of the financial crisis, specifically – the 2016 figures were not fully offset by a switch into cash and short-term assets.

The ONS data showed net withdrawals of £11bn from overseas equities and £8bn from UK equities.

Meanwhile, an aggregate £2bn was invested in short-term assets.

“Net disinvestment at a total level is unusual and may be influenced by changes in investor confidence in the economic environment,” the ONS said in its MQ5 statistical release.

However, the ONS said a “very limited number” of respondents to its survey had cited Brexit as a factor in their Q3 decisions.

The UK voted to leave the European Union on 23 June, making Q3 the first set of investment data from the ONS post-referendum.

Kelly-Scholte said: “A lot of moves post-Brexit would have been tactical. I’m not sure we can point to Brexit as the main cause of flows.”

Instead, she pointed to asset class trends such as a continued collective move into alternatives, such as infrastructure and real estate.