On 26 February, a draft bill containing modifications to the method for determining the discount rate used for pension valuations under the Handelsgesetzbuch (HGB) accounting provisions, commonly known as German generally accepted accounting practices (GAAP), passed its last legislative obstacle following acceptance by the Bundesrat. The modifications will become law when the Federal President signs the legislation and the German Federal Gazette has published it.

In 2015, the German parliament demanded significant changes to the discount rate – a rolling average period of 12 or even 15 years had been under discussion for some time. These considerations raised hopes for substantial relief for the companies affected. However, with the discount rate now being calculated with a rolling average period of 10 years, legislators have settled upon a half-hearted compromise.

Which amendments have been passed? Compared to the Federal government’s earlier formulation proposal, no content changes have been made:

• The discount rate used to determine the pension liabilities will be calculated with a rolling average period of 10 years instead of seven.

• In addition, the pension liabilities must be determined with an average period of seven years, regardless of which may be higher.

• The differential between these values either has to be stated under the balance sheet, or in the disclosures.

• If the liabilities are calculated with an average period of seven years are higher, the differential is withheld from dividend payout, meaning that reserves of that amount have to stay within the company. Provided sufficient past reserves are available, the profit of the current year (containing the effects of the changes in interest rates caused by the revision) may be distributed.

While the legislator thinks a discount rate determined by a seven-year rolling average period is the ‘right’ one, the law does not provide any option to stick to the former method. 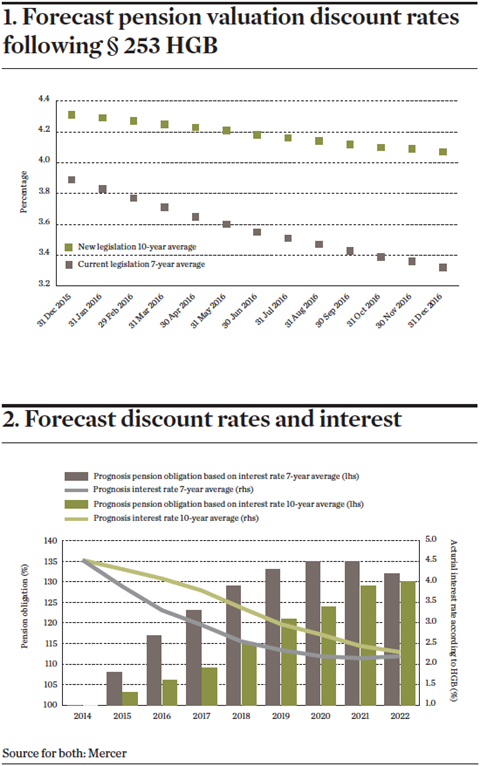 • If the financial year begins and ends in 2015, the new legislation is voluntary. Except for short fiscal years, this is the case for the balance sheet date of 31 December 2015.

Unfortunately, no changes to the transitional arrangement have been made in conjunction with the government’s draft. Companies with a balance sheet date of 31 January 2016 will usually have already closed their books. But, since the annual financial statement is finalised at a later date, the new legislation applies. This may cause considerable delays for the publication of annual reports.

For example, under the new legislation, the discount rate for the balance sheet date of 31 March 2016, rises by half a percentage point. The rate is therefore almost as high as the discount rate determined for the same date the year before, which was 4.37%.

What can companies do now? After the government published its formulation proposal, some companies exercised their right to choose between the discount rates for 31 December 2015. Some reopened closed books to do so.

If companies still have an active difference caused by the transition to the Bilanzrechtsmodernisierungsgesetz (BilMoG) legislation, they have the possibility to make a special allocation for their pension provisions and (maybe just partially) compensate the relief caused by the change in the discount rates.

Companies with a balance sheet date of 31 January 2016 or later must follow the new legislation and use a rolling average period of 10 years for their calculations. The calculations with the rolling average period of seven years are, however, still necessary to obtain the differential amount that has to be stated in the appendix and to determine the restriction of distributions.

The payout block is not regulated in §268 par. 8, but in §253 par. 6 HGB. This means that it applies for all companies, not only corporations, and it does not apply to profit transfer agreements required by §301 of Aktiensgesetz which points to §268 par. 8 only. This could be an error of the legislator.