Dutch pension funds’ nose-diving coverage ratios underline just how futile various measures, though effective at the time of implementation, have been in improving funding and minimise rights cuts. Over the past decade, required recovery terms have been stretched, while an ultimate forward rate (UFR) – to shore up the discount rate for liabilities – has been introduced. The regulator also introduced a three-month current-funding average, to reduce volatility in pension funds’ coverage ratios, and, since last year, there has been a new – and strict – financial assessment framework (nFTK).

All of these measures, which effectively ignore the inconvenient truths of increasing longevity, falling investment returns and the post-war ‘grey wave’, seem to be crumbling under the weight of falling equity markets, commodity prices and interest rates. Neither did the financial regulator’s 0.9-percentage-point reduction of the UFR to the more realistic level of 3.3% manage to bolster pension funds’ coverage. 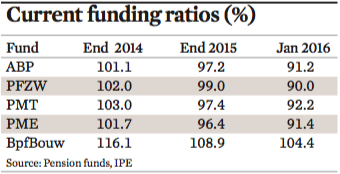 Since the start of 2016, the current funding of the 320 remaining pension funds in the Netherlands have dropped from 103% to 95%. The official ‘policy funding’ – the 12-month average of the current coverage, and the main criterion for rights cuts and indexation – has fallen to less than 103%. It is set to drop further to 95% if conditions fail to improve over the coming 12 months.

With the introduction of the nFTK, Dutch pension funds appeared to have regained some measure of control. Under the new rules, they had to begin discounting pension rights if their policy funding fell short of the required minimum of 105% for five years in a row. The nFTK was expected to serve as a stopgap, covering the base before an entirely new and sustainable pensions system could be introduced.

Just one year since the nFTK came into force, however, four of the five largest pension funds – representing nearly €670bn in assets – are staring into the abyss. The €355bn civil service scheme ABP has warned that its current funding is about 90%, down from more than 101% at the start of 2015. At 90%, many schemes must start applying rights cuts at year-end if their coverage fails to improve.

The current funding of the €165bn healthcare scheme PFZW – 102% at the start of last year – fell to 90% in January; its critical level for immediate cuts, which depends partly on the composition of a scheme’s population, stands at 87%. Meanwhile, the €40bn metal scheme PME’s coverage fell to 91.4% at the end of January, while funding at its €60bn sister scheme PMT dropped to 92.2%. Mercer and Aon Hewitt have estimated that, over the month of February alone, Dutch pension funds’ average funding fell by 2-3 percentage points.

These recent developments highlight just how urgent it is to replace the Netherlands’s still predominantly defined benefit arrangements with a sustainable pensions system. The contours of the new system are gradually taking shape – and winning industry support, as more and more players accept that the notion of a funding ratio for a pensions promise 40 or 50 years in the future is no longer tenable.

Although the government is expected to present its proposals this year, a new Cabinet is unlikely to make any final decisions before 2017, and, as things stand now, any new system is unlikely to be introduced before 2019.