Clouds are gathering for the global economy

Nowadays growth forecasts seems to be prefaced by the words ‘revised down’. Global growth is expected to slow to 2.9% in 2019, according to the World Bank, with developed markets only delivering 2%.1

It is widely accepted that the world economy has entered a late stage of the cycle with fears of recession growing. Asset allocators are running a nervous eye over their portfolios to gauge if they have the right mix.

Central banks are being supportive, with the US Federal Reserve’s short-lived tightening of last year now just a reason for Donald Trump to go ‘told you so’. “But there are two constraints that are beyond the control of the central banks,” says Karen Ward, chief market strategist for EMEA, at JPMorgan Asset Management: “First, central banks cannot change the fact that labour markets are tight, and this can feed through in terms of rising inflation, or squeezed margins.

“Second, central banks cannot offset the impact of geopolitical risk on capex spending. Firms’ spending intentions have tumbled in recent months. If investment does not pick up then productivity will remain weak, which has been one of the key disappointments of this expansion.”

Larry Hatheway, global chief economist at GAM, agrees that “every major economy is fully employed; therefore, inflation will tend to trend upwards”. He adds that “corporate margins, and therefore profitability, have peaked”. We are, he says, in a “post-peak” world.

Dangerous curves
As if miserable growth prospects are not enough, in March the US yield curve inverted. In ‘normal’ times the curve is positively-sloped, but inverted curves are a recessionary indicator. Paul Krugman, a Nobel prizewinning economist, tweeted: “an inverted yield curve does not cause a recession. Instead, it is telling you about average investor opinion: bond buyers see economic weakness ahead, and believe that the Fed will be cutting rates.”2

While growth is slowing, “we do not see recession just yet”, says Antoine Lesne, head of strategy and research at SPDR EMEA, although he does acknowledge inversion is a sign that recession is close, so there is a need to protect portfolios.

Others are not so convinced this is a harbinger of doom. “I get how Krugman could infer this,” says Hatheway, “but if we accept his view that the yield curve is the canary in the coal mine, you still have to address why we face a recession: economic expansion does not die of old age, but for a reason. It happens because of one of a number of factors – tightening of monetary policy; similarly negative fiscal policy; an oil shock, or an unintended build-up of inventories.”

Ward agrees that the curve has “been distorted as a reliable economic indicator by QE. Otherwise you would have to believe that long-term rates are neutral at 2.5%, which I do not believe is the case.” 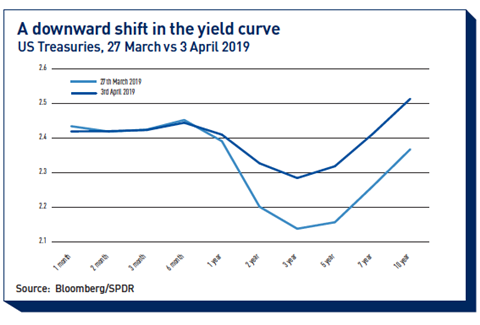 But for Krugman, there is a “twist right now which makes the inversion even scarier than it looks, at least a bit”. This is because previous inversions happened at much higher short rates – 5 or 6%, versus 2.5% now: “The yield curve inversion in 2006 reflected at least some probability that the Fed might cut rates by 500bps. Now, it does not have 500bps to cut. So this inversion actually reflects a worse outlook for the economy than the number itself suggests.”

Active vs passive
Given that Ward and Hatheway are proponents of active management and Lesne, passive, it is no surprise they should disagree over what strategies are appropriate to deal with downbeat forecasts.

For Ward, “leverage is a concern, and this is a particular problem for passive strategies. It is a question of knowing where the leverage is, and ensuring that you are adequately rewarded for it,” and it is difficult for investors to make this distinction with broad passive exposures. She does, however, tip high-yield over investment-grade, as investors are better compensated for the risk.

Hatheway says that passive strategies would not deliver optimal results in this low-growth situation as “in a world of lower returns, higher volatility and shifting correlation, the key investment decisions reside in portfolio construction and portfolio risk management. And that is always an ‘active’ decision.”

However, for Lesne, “ETFs are not the enemy of active management. You can actively manage your passive exposures, or see it as a way of dipping a toe into a market before deciding on an active manager.”

He goes further, saying that passive funds have been outperforming active fixed-income strategies. This may sound paradoxical but Lesne makes the distinction between the broad market, and the subset of investment funds within it, where “a lot of fixed-income underperformance has come from active managers taking much shorter duration positions than you would get through passive exposure. When credit spreads widen and treasuries rally, as they did in November, that can hit you hard.”

Seeking value
For active, passive and mixed strategies, the key factor is the chosen asset class.

In a low-growth world, it is a question of seeking out where there is still growth, and Ward, Hatheway and Lesne all recommend emerging market debt. Ward says that in emerging markets there are “significant structural forces driving this, alongside the development of their capital markets, such as Shanghai Connect and debt markets in China”.

She adds that “while growth is low in developed markets, there is considerable disruption, so understanding who will be winners in this process will allow investors to tap into sustainable growth”.

Lesne recommends low volatility, bond proxies and quality dividends in equities, adding that European real estate looks attractive – “although, because of Brexit, we wouldn’t extend that call to UK property”.

Perhaps most strikingly, Hatheway argues for a high weighting of alternatives in a portfolio – 40%, alongside 30% each for equities and bonds: “This would not deliver a high return, but instead a number of income streams with low correlation to one another – or at least a low beta – picking up a whole lot of pennies, hopefully without too many steamrollers around.”

The question then is, how far off is that steamroller?