Opinions differ sharply on the sustainability of emerging market debt

• The World Bank economists have warned of the increasing vulnerability of many emerging market economies.
• Investment experts are arguing that the World Bank is taking too narrow a view of the resilience of the developing world.
• Industry experts contend that the quality of debt has increased and assets have risen faster than debt.
• The strength of economic growth will determine the ability of emerging economies to handle their debt burden.

Back in June 2017, the World Bank published a downbeat report on debt dynamics in emerging market and developing economies (EMDEs) that received little attention. The organisation argued that many such economies have become increasingly vulnerable to financial shocks in the decade since the global financial crisis.

Of course, the World Bank’s analysis could be flawed but, given its expertise, it should not be ignored. It has over 10,000 employees, including hundreds of economists, in 120 offices worldwide. Its claims demand serious investigation by investors in emerging market debt.

The report was published as a ‘special focus’ in its annual report on Global Economic Prospects. It was far more than merely a discussion paper.

Several factors were held responsible. Many have experienced weak growth since the financial crisis while commodity exporters in particular have suffered from price declines. In relation to private sector debt the report warned that a post-crisis credit boom had left a legacy of elevated debt levels.

The report also warned of the possibility, although not probability, that monetary policy normalisation in the West could stoke up volatility. Such a scenario could hit emerging market debt.

“The development of local capital markets has facilitated a shift from hard to local currency debt. That means that if the government faces repayment difficulties it can print money”

Nor is the World Bank alone in warning of emerging market debt vulnerabilities. Other organisations have made similar statements. For example, the Bank for International Settlements, warned in its annual report that: “policy tightening to contain an inflation spurt could trigger, or amplify, a financial bust in the more vulnerable countries. This would be especially true if higher policy rates coincided with a snapback in bond yields and US dollar appreciation: the strong post-crisis expansion of dollar-denominated debt has raised vulnerabilities, particularly in some emerging market economies.”

The International Monetary Fund (IMF) argued in the April edition of the twice-yearly Fiscal Monitor that: “In emerging market and developing economies, a more rapid increase in interest rates, a significant appreciation of the US dollar, and lower commodity prices could exacerbate debt vulnerabilities and trigger the materialisation of contingent liabilities, in particular those related to implicit government guarantees on corporate borrowing.”

While none of the experts interviewed for this report disputed the headline figures they all rejected what they saw as overly pessimistic conclusions. The thrust of their argument is that the focus is too narrow. International organisations, industry experts argue, attach too much importance to headline debt levels and too little to other positive developments. Some individual markets may be vulnerable but experts contend that the overall is positive. 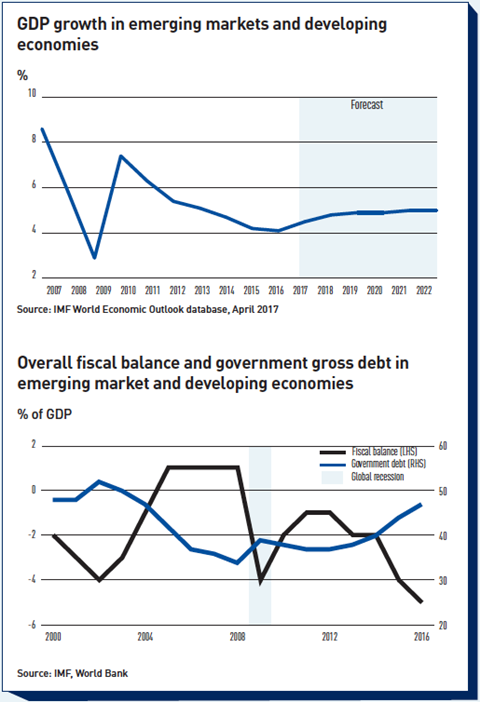 In broad terms, there are four counter-arguments against the pessimistic view.

● Relatively short-term historical comparisons can be misleading. Some contend that debt is not particularly high by historical standards. It might have risen over the past decade but from a longer term perspective the contrast is not that great. Erik Lueth, emerging markets economist at Legal & General Investment Management concedes it can be hard to get historical data on emerging market debt. However, he says that judging by figures from the IMF, the current average of about 50% of GDP “is not terribly high by historical standards”. In contrast, in the late 1980s, emerging market debt was about 67% of GDP.

● The quality of emerging market debt is higher. On average, it is more local and higher rated than a decade ago.

The development of local capital markets has facilitated a shift from hard to local currency debt. That means that if the government faces repayment difficulties it can print money. Such action still carries an inflationary risk but it means countries face less pressure from foreign creditors for repayments.

In relation to the quality of average credit rating of sovereign debt, it has improved. It broke through into investment grade level in 2009 and peaked in 2015. Since then it is still investment grade.

● Although debt levels have risen, assets has risen even faster. Many governments, for example, have substantial foreign exchange reserves. China, for instance, has about $3trn (€2.6trn). That means that, although its gross debt position has risen its liabilities have fallen.

An increasing number of emerging markets corporates also have foreign currency assets on their balance sheets. “Historically those companies didn’t have a local capital market so they were dependent on dollar borrowing and if dollar borrowing froze up and they couldn’t roll over their debt and, if there was a devaluation and volatility, they were bankrupt,” says, Lawrence Brainard, chief emerging markets economist at TS Lombard. “Their management today is much better. They have much less currency mismatch on their balance sheet. They have external assets which are quite significant”.

● Stronger economic growth should put emerging markets in a better position to repay their debt.

The situation here is not unequivocally positive. Federico Kaune, head of emerging markets fixed income at UBS Asset Management, points out that productivity growth in the emerging world – as in the developed world – has suffered a decline. However, a willingness to implement the necessary reforms means that emerging economies could regain their growth momentum. “That’s why I’m a bit more optimistic when it comes to emerging markets,” he says. “They are adjusting, they are liberalising and they are adopting a strategy of reform to improve productivity.”

PGIM has published a paper that spells out the dynamics behind a new model of emerging market growth. Emerging Markets At The Crossroads argues that the old model of export-led growth has stalled for several reasons. These include developments in developed markets such as a slowdown in aggregate demand growth and the populist backlash against free trade and globalisation. Other factors include rising wages in emerging markets and the end of the commodity supercycle.

However, PGIM argues, several factors are helping to propel the emergence of a new model of growth. These include trade expansion within emerging markets, the youthful population, a rising middle class, digital technologies and the growth of local capital markets.

Of course no one is suggesting that emerging economies are impervious to future problems. Some countries, such as Venezuela, clearly are vulnerable. It may also be that different weaknesses come to the fore. For instance, Brainard argues that household debt in South Korea is reaching elevated levels.

Clearly the debate between the pessimistic international economists and the upbeat investment experts is far from academic. If the pessimists are right then severe debt problems could become apparent in several emerging markets. On the other hand, if the industry specialists are correct, emerging market debt should provide an attractive yield.