Publica, Switzerland’s largest pension fund, achieved a net return of 6.7% on its investments in 2017, buoyed in particular by the performance of its emerging markets holdings.

Excluding currency hedging the 2017 result would have been 8.2%.

Publica’s emerging markets investments made the biggest contribution to the fund’s overall performance, gaining just less than 3%. Equities gained just under 30%, and US dollar and local currency denominated government bonds returned around 9%.

Equities were the best performing of the main asset classes Publica held in 2017, gaining 5.5%. Its European equity holdings returned 14% on a currency-hedged basis, while its emerging markets exposure made almost 30%.

Publica is the multi-employer pension fund for the Swiss confederation and network of governmental universities and research institutions. It comprises open and closed pension plans, and runs different investment strategies for each.

The investments for its open schemes, which account for the bulk of the institution’s total assets (CHF36bn), gained 7.1% in 2017. The investment strategy for its closed plans led to a return of 3.3% for 2017.

The average funding level of all 20 pension plans within Publica was estimated at 107% at the end of 2017.

Publica’s board of directors was due to make further decisions about its technical parameters this month after the Swiss federal parliament late last year rejected a request for funds from the government to cushion the impact on federal personnel from cuts to the parameters.

Publica, which is also the pension fund for federal employees in Switzerland, announced the cuts last year, effectively reducing the pension promises to future retirees.

Commenting on the federal parliament’s decision to reject the support measures for Publica, the trade union for federal employees (VGB) said the government and Publica’s decision-making bodies needed to come up with a solution.

“Reducing the technical interest rate and consequently the conversion rate without accompanying measures is unthinkable,” said the VGB. “The benefit loss for federal employees would be enormous.”

Swiss corporate plans on the up

Swiss corporate pension schemes’ funding increased by around 1.5 percentage points in the fourth quarter of 2017, according to the latest Willis Towers Watson figures.

Positive investment returns had the most significant impact on the consultancy’s Swiss pension index, offsetting the impact of increasing pension obligations from a lower discount rate.

The return on investments held by Swiss pension funds was 2.3% higher in the fourth quarter than the preceding quarter, based on the Pictet BVG-40 plus index.

This took the return for the calendar year to “a very solid” 7.6% overall, the consultancy said.

Adam Casey, senior consultant at Willis Towers Watson, said: “Companies should consider measures to reduce risk in their pension positions as IAS 19 balance sheet levels are close to 10-year highs. This can be done more easily if the pension funds are in a better funding position.” 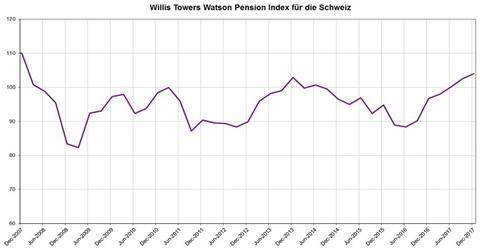 The average funding ratio for Swiss corporate pension schemes is at its highest since 2008.