Last month brought to an end a key period of feedback on the European Commission’s (EC) sustainable finance proposals.

Announced in May, the proposals implement elements of the EC’s action plan. The package comprised three legislative proposals and the launch of a consultation on amendments to delegated acts under MiFID II and the Insurance Distribution Directive (IDD).

Since then, that consultation has closed, and the EC has appointed the members of its technical expert group. It has also requested technical advice from European supervisory authorities in relation to potential rule changes that would explicitly require the integration of environmental, social and corporate governance (ESG) risks in investment decision or advisory processes.

Another important development has been in the European Parliament, which has to debate and negotiate over the regulations the Commission has proposed.

Dutch MEP Paul Tang is the rapporteur for the proposed regulation “on disclosures relating to sustainable investments and sustainability risks”. Last month he set out his initial view on what the contents of the regulation should be.

Other members of the European Parliament’s economic and monetary affairs committee have until 19 September to propose their own amendments to the Commission’s proposal. They will then negotiate on the committee’s position, with a vote scheduled to take place on 5 November.

The European Council, the body made up of the leaders of the EU member states, also has to review the Commission’s legislative proposals.

Organisations and individuals outside the EU institutions had an opportunity to provide feedback on the EC’s proposals until August. This was not in the context of a specific consultation, but as standard procedure after the EC has adopted legislative acts, which are open for feedback for a minimum of eight weeks.

The EC says it will summarise all feedback and present it to the European Parliament and European Council with the aim of feeding the results into the legislative debate.

In the feedback submitted about a week before the deadline, stakeholders expressed concern about issues such as the sequencing and timing of different measures, definitions of key terms and concepts and the consequences thereof, and the rule-making process itself.

Commenting on the EC’s proposal for a regulation “on the establishment of a framework to facilitate sustainable investment” – better known as the taxonomy proposal – Amundi, Europe’s largest asset manager, rejected the timing of the application of the different measures as envisaged by the EC. 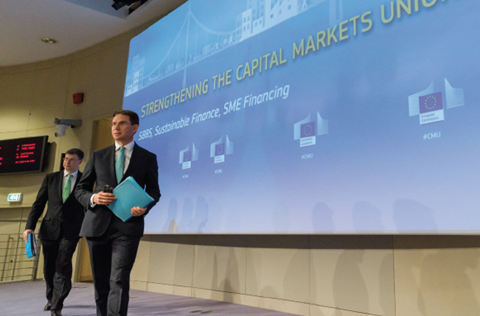 “We doubt that the EC properly addressed the remark on the sequencing of regulations within the package,” Frédéric Bompaire, Amundi’s head of public affairs, said in his feedback. He was referring to points made by the Regulatory Scrutiny Board (RSB) about the taxonomy not being made mandatory before it had reached “sufficient stability and maturity”.

The power of definitions

Several submissions raised concerns about the way the EC has defined “sustainable investments” in its proposed regulation on reporting requirements.

EFAMA, the European asset management and fund management association, is worried by a perceived focus on impact and thematic investing, which it said entailed a risk that “a large majority of investment approaches and products that today are adopted as ‘sustainable’ on objective and legitimate grounds may no longer be considered so”.

“We would argue that this would contravene the EU’s objective of spurring on sustainable investments, without any analysis or reasoning behind such a move,” added Efama.

Aviva, which is “strongly supportive” of targeted policy measures to promote sustainable finance, has also raised concerns about the EC’s definition of sustainable investments. It said the wording should not discourage investment approaches that are “broader than moving funding” towards environmentally sustainable economic activity.

In the EC’s proposed disclosures regulation, a sustainable investment is defined as an investment in an economic activity that contributes to an environmental and/or social objective, and/or in a company with good governance.

According to Aviva, there is a possibility that the definitions set out in the regulation “are worded in a way that might discourage sustainable investment through proactive stewardship of investments to promote sustainability, for example through company engagement and voting”.

“The current wording may also not allow other strategies to integrate ESG factors, for example the integration of ESG risks and opportunities throughout a firm’s investment analysis, or screening out certain types of investments,” it said.

2° Investing, a think tank specialising in promoting the integration of climate goals in investment strategies and financial regulation, suggested in its feedback that the EC’s definition of sustainable investments could be inconsistent with its goal of mitigating climate change.

Similar to Efama and Aviva, it argued that the EC’s definition excludes other sustainable investment approaches being pursued by investors. These include the use of shareholder voting rights and “other power as financier” to try to influence investee companies’ strategy and decisions, and that this exclusion seems arbitrary.

According to 2° Investing, the two main investment vehicles that the EC looked set to support through changes to MiFID II and IDD rules were green bonds and low carbon indices. It said the Commission presented these as a way of contributing to sustainability goals, but that they were “not associated with any evidence that they will be actually effective in delivering this outcome”.

It continued: “In both cases, the EC moves away from evidence-based policy making, and therefore pushes sustainable finance on a slippery slope that inevitably ends up with concerns regarding consumer protection.”