ESG: Hearing the voices of employees

“I have arrived at the conviction that no mere institutions, however wise, and however much thought may have been required to organise and arrange them, can attach class to class as they should be attached, unless the working out of such institutions bring the individuals of the different classes into actual personal contact. Such intercourse is the very breath of life.”

These are the words of Mr Thornton, owner of a cotton mill in the industrialising north of England in the 19th century social novel North and South, by English author Elizabeth Gaskell. He utters them in conversation with an MP, having realised that respectfully engaging with his workers would benefit industrial relations.

Although he did not expect “cultivating some intercourse with the hands beyond the mere ‘cash nexus’” would prevent strikes, he thought it “may render strikes not the bitter, venomous sources of hatred they have hitherto been”.

Fast-forward 150 years, and the UK government is thinking about company directors and employee engagement in a different light. Not as a means of preventing or moderating strikes, which are at historically low levels, but as a measure to restore faith in business. This is in the context of growing discontent with inequality and the rise of populism.

As a result, employee representation in boardrooms could become a feature of UK corporate governance. Crucially from investors’ perspective, however, this will not be mandated.

Instead, the government has asked the Financial Reporting Council (FRC) to consult on a new principle for the UK Corporate Governance Code, which would: “establish the importance of strengthening the voice of employees and other non-shareholder interests at board level as an important component of running a sustainable business”.

More specifically, it said the FRC would consult on a specific provision to require premium-listed companies to adopt, or explain why they had not, one of three employee engagement mechanisms:

• a designated non-executive director;
• a formal employee advisory council; or
• a director from the workforce.

The plan was set out in August in response to a consultation it launched in November on corporate governance reform. The deadline for submissions was February.

This was when the FRC, which sets the UK Corporate Governance Code, announced that it was planning a review of the code.

Responding to the government’s August announcement, the FRC said it would use the feedback to develop its consultation on the code’s review.

Whether or not UK premium-listed companies will end up having to “comply or explain” will depend on the FRC, but it does not seem unreasonable that such a provision will see the light of day.

For one, directors are already legally obliged, under section 172 of the Companies Act 2006, to have regard to the interests of employees in fulfilling their duty to promote the success of the company for the benefit of its shareholders.

Also, investors were positive about strengthening employee engagement, although they feared the approach being mandated and expressed preferences for certain options.

The UK’s asset management trade body, for example, said it supported a range of options for taking into account differing stakeholders’ interests, except the use of a stakeholder director.

“We are concerned that there is an inherent conflict in the idea of a director simultaneously representing a stakeholder group, while observing their directors’ duties, which requires them to give weight to the views of all stakeholders,” the Investment Association said.

It noted that in the absence of worker representation being mandated, UK companies are still free to appoint employees under current legislation. 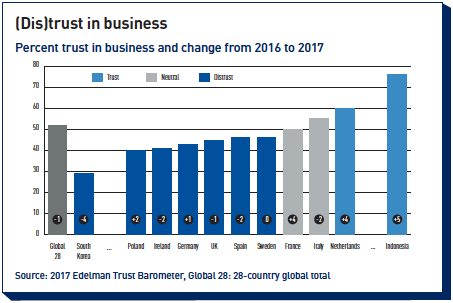 First Group, a FTSE 250 transport company, is an example. It has had an employee director since its inception in 1989, according to the Trades Union Congress (TUC).

Hans-Christoph Hirt, head of Hermes EOS, the stewardship arm of Hermes Investment Management, says Hermes is one of the few investors to say employee representation in boardrooms “could be a jolly good thing”.

In its submission to the government’s consultation, Hermes said the UK could learn from other jurisdictions while maintaining its unitary board structure.

For Hermes, elected employee directors would not be considered independent and would be a minority element of the total board. They would have the same fiduciary duty to act in the interests of the company and not a specific stakeholder.

Hirt says that the UK is in the early stages of thinking about who would be the workforce representative on the board, for example in terms of which type of employee this could or should be.

The TUC had hoped that worker board representation would become legislation this year. In an October 2016 paper, it said the UK was in a minority of European countries with “no rights for workers’ voice within corporate governance”.

Contrary to common belief, employee board representation is not a uniquely German phenomenon, it said. According to research commissioned by the TUC, 19 out of 28 EU member states have provision for workers’ representation on boards, and in 13 of these the rights apply across much of the private sector.

The way in which employee board representation is operated varies from country to country, the TUC noted. This includes in relation to who is eligible, how they are nominated and elected, and the board structure (unitary or two-tier) to which workers’ participation rights apply.

In the Netherlands, for example, the representative cannot be a company employee or from a trade union. The role is therefore carried out by people “sympathetic to the labour movement but one step removed”, the TUC says.

The diversity in how worker representation operates across Europe and the form it takes is encouraging, according to the TUC.

“[It] is a useful counteraction to the argument that introducing worker representation on boards in the UK would somehow involve the ‘imposition’ of a ‘foreign’ system onto our own,” it says. “In reality, workers’ participation can operate in a huge variety of ways, and works well across a wide range of very different corporate governance systems.”

Under the approach envisaged by the UK government, companies would decide if they opt for employee representation in the boardroom, and what form this would take. But,  it has reinforced the view that directors need to have regard to employees’ interests, and be more explicit about how they do so.