Had Exxon Mobil reported its reserves differently in 2016, investors might have taken a another view of the company’s future trajectory. The company reported its Kearl oil sands as reserves, and in 2016 was ordered to debook them by the US Securities and Exchange Commission (SEC). An important shift in its disclosures ensued in March 2017, with proved reserves cut by 3.3bn oil-equivalent barrels.

In October 2016 the company admitted that, under the SEC definition of proven reserves, certain quantities of oil, such as those associated with the Kearl oil sands operation in Canada, would not qualify as proven reserves at the end of the year.

According to Tarek Soliman, senior analyst at the CDP, a non-governmental organisation based in the UK, the systematic practice of considering climate-related risk would have resulted in a different disclosure. It would transform investor perceptions if replicated across the whole oil and gas sector. “If the company were to integrate climate risk into its assessments, it would highlight that these assets show a high propensity to become impaired. They would have been downgraded to a resource rather than a reserve, and this problem would have been foreseen,” says Soliman.

A redirection of the energy pathway, not just for Exxon Mobil but for all its competitors, might follow if they acted this way, as recommended in the final report of the Task Force on Climate-Related Financial Disclosures (TCFD). This is due to be presented to the G20 by Bank of England governor Mark Carney in July.

Classifying assets, liabilities and acquisitions under the lens of climate-related risk would, according to the TCFD, support the more appropriate pricing of risks and allocation of capital in the context of climate change. This would work as a voluntary initiative, helping speed the transition to a low-carbon economy, and would shift the corporate perspective beyond immediate concerns. In Exxon Mobil’s case, it might identify a potential stranded asset. 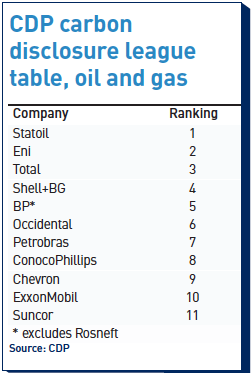 As Soliman observes, most industries are not reporting in depth on this values-based assumption. Oil and gas companies are understandably not likely to want to report through a channel that undermines their reason for existence. But improvements have been made in the past decade as they responded to demands for historical data on greenhouse gas emissions. These they usually displayed in their corporate responsibility statements. But now the pressure, as expressed by the TCFD, is to disclose consistently for the first time in financial filings, and to look much further into the future.

“It would change what the directors are telling us in the strategic report but wouldn’t change [the structure of] the balance sheet and profit-and-loss account,” explains Russell Picot, special adviser to the TCFD and former chief accounting officer at HSBC. In the case of hydrocarbons, categories such as reserves and resources in strategic reports would be the numbers most likely to alter.

Leaders have already emerged in this space, and the picture is mixed. CDP finds the Norwegian company Statoil is best at preparing for the future transition to a low-carbon economy in its 2016 study of the sector, In the Pipeline. Canadian company Suncor is listed as the worst, and Exxon Mobil last but one.

“Statoil is the only company that quantifies what a world with a 2°C temperature increase would do to its worth,” says Soliman. Indeed, in its 2016 annual report, Statoil states that the International Energy Agency’s ‘450 ppm [parts per million] scenario’, compatible with that temperature increase, “could have a positive impact of approximately 6% on Statoil’s net present value [NPV] compared to Statoil’s internal planning assumptions as of December 2016”.

While most companies employ conventional economic metrics to justify decisions in financial filings, CDP finds they also increasingly publish carbon pricing. This can be perceived as another way to express or at least accept the risk of regulation on carbon emissions, and to test the company’s resilience in that light. Eight out of the 11 companies use an internal carbon price, which ranges from $22 a tonne to $57 a tonne, while three (Chevron, Occidental and Petrobras) are silent on the matter.

As Soliman suggests, internal carbon pricing may have affected Shell’s announcement that it had ceased exploring the Burger prospect in Alaska. However, this is not explicit. Clarifying its decision, the company in 2015 said it was due to “high costs associated with the project, and the challenging and unpredictable federal regulatory environment in offshore Alaska.”

Hence, some of the companies apply a carbon price to projects under assessment, but there is no evidence they screen out projects on this basis. “I have not seen a case where the company has said, ‘the project makes sense but we are going to veto it because the carbon price is too high’,” says Soliman.

The TCFD report comes at a time of transition. Some oil and gas majors are talking about climate risk, others are not. Some are acting accordingly, others paying lip service. One example of directional shift is Italian company Eni, which is increasing the share of gas in its portfolio. In its 2015 annual report, it states: “Companies operating in energy business have to face challenges… such as climate change and a gradual decarbonisation process. In this context, natural gas represents an opportunity for a strategic repositioning, thanks to gas low carbon intensity.”

But the task force wants more. If the corporate community systematically adopted its recommendations, balance sheet, income statements and strategic reports would most likely need modifications. As Picot points out: “Including climate risk would sharpen disclosures on the impairment of cash flows arising from assets.”

Investors would be able to access a set of comparable sector scenario analysis relating at least to a 2°C scenario as well as, for instance, scenarios related to Nationally Determined Contributions and business-as-usual (greater than 2°C) scenarios. But the actual frameworks have yet to be shaped. “We need to see a period of experimentation. Three or four years down the road we could potentially be assessing what is useful in the voluntary disclosures, and see it codified by institutions through, for example, stock exchange guidelines,” says Picot.

However, he suggests the most significant progression would be found in strategic discussions in financial statements. “This is not going to result in a huge data drop by companies but, rather, a thoughtful narrative description from board directors. It will hopefully be used as an engagement tool as well as a divestment tool,” he says. A move towards less carbon-intensive business models could result. However, says Picot: “We’re not saying they should alter their business model but that the information needs to get out there so that the market can decide.”

Disclosures on climate-related risk have been improving but, as the Statoil case demonstrates, the view of risk is always subjective. “The company had the previous year assessed a 5% loss in NPV, so the 6% improvement estimated in 2016 was an interesting flip,” Soliman points out. Arguably, the risks to financial performance are considerable if a company moves away from its traditional business model or abandons its store of expertise.

Given a different political environment and the US withdrawal from the Paris Agreement, the adoption of TCFD suggestions could be delayed.