China: On a long climb up the ESG ladder

China is the world’s biggest emitter of greenhouse gases, compels imprisoned Muslims in Xinjiang to toil in factories, and has Communist Party committees embedded in companies, exercising a shadowy influence over management. It is, in other words, not exactly a poster child for good ESG performance.

On the other hand, “I think it’s fair to say that ESG is improving across China”, says David Smith, head of corporate governance for Asia at Aberdeen Standard Investments in Singapore – echoing the view of many. “There’s a long way to go, for sure, but at least there is forward momentum.”

Index and ESG data provider MSCI does not yet have long-term ESG data for China, but Xiaoshu Wang, ESG Research China team leader in Beijing, notes “upward momentum” and “moderate improvement” over the past year.

On the other hand, the proportion of true ESG dogs – those with the worst possible rating (CCC) – has fallen from 22% to 20% since 2018, although it is still much higher than for the MSCI Emerging Markets index, at 13%.

The number of companies with the second-highest rating, AA, has inched up from five to seven, although at 1%, it compares poorly with 4% for the broad MSCI emerging market index. An example of an AA company is electric carmaker Geely Automobile.

Wang suggests that all three of the constituents of ESG – the E, S and G – are showing progress. For example, “improving the environment is definitely a priority for the Chinese government;  a growing number of regulatory policies have put more pressure on carbon-intensive companies, as well as on companies that pollute.” This includes the 2018 Environmental Tax Law, which imposes higher taxes on pollution. Moreover, the China Securities Regulatory Commission has introduced a new requirement that cuts across the E and G categories: by 2020 all listed companies must disclose ESG risks associated with their operations.

Wang, along with others outside MSCI, credits another driver as the policy of MSCI itself which in 2018 started including China A shares – shares listed on mainland exchanges – in its global stock indices. This development, in conjunction with deregulation that makes it easier for financial markets players in Hong Kong to trade mainland Chinese shares, has opened up Chinese companies to the scrutiny of overseas institutional investors, which are often highly concerned with ESG.

However, Vitali Kalesnik, partner at Research Affiliates in London, disagrees strongly with this optimistic assessment. After crunching ESG numbers from data provider Vigeo Eiris for IPE relating to four emerging and four developed markets, he finds that the average Chinese company scores only 13 for the environmental factor – down one point since 2014, and much lower than 35 for India and 40 for Brazil, let alone 48 for the UK and Germany.

On governance, it is four points lower at 29, a touch below Brazil, far below Russia and India at 37, and even further from the UK, at 57. However, it excels most in mediocrity for diversity, with only 7, far below the next worst country, Russia, at 18.

Only the social score has improved slightly, by two points to 22 – but even here, it greatly lags the next lowest market. To put the numbers in context, an individual corporate score below 30 is “very weak”, as Kalesnik puts it. He attributes this poor scoring to the “centrally planned” Chinese system. Because of this, “people have very limited impact on government: even if there is a desire from the grassroots to have more social responsibility, more diversity or a better environment, if the central government decides to ignore it, it can easily do so”.

On the other hand, because of this concentration of power, ESG has the potential to move rapidly: “If the government decides it wants China to become clean, for example, it can be ruthlessly efficient in executing that.” 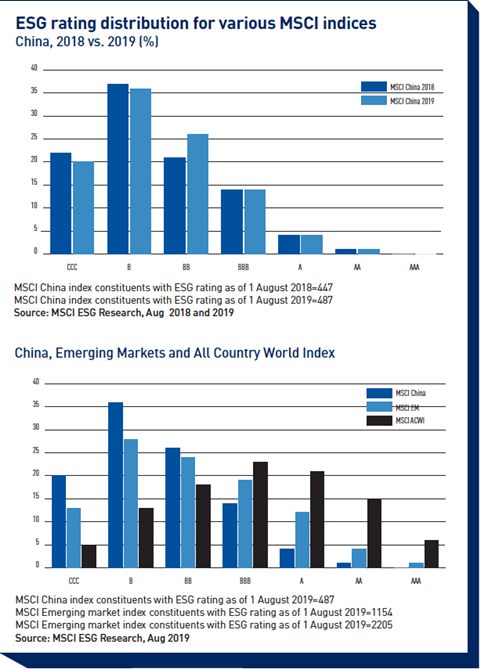 ESG data provider Sustainalytics says it cannot tell whether Chinese corporate ESG is improving or not, because it has recently moved to a new ratings methodology.

So much for the wide divergence of opinion on an aggregate basis. At the level of individual companies, too, what is striking is how little rival ESG data providers agree with each other. Ovidiu Patrascu, sustainable investment analyst at Schroders, has compared the ESG scores assessed by MSCI, Sustainalytics and Thomson Reuters to assess the probability that any company will be given the same ESG score by the same provider (there are seven possible scores).

The low degree of overlap is a global issue. Patrascu estimates it at 12% for global stock markets as a whole. He points to differences in methodology, including the fact that some providers’ scores measure the degree that companies are exposed to various ESG risks relative to their industry peers, while others look at ESG risks on an absolute basis. However, it is even lower for Chinese companies, at 10%. This may reflect the particularly large information gaps in what companies report on their ESG.

If the opinion of specialist ESG data providers varies so much, this is all the more reason for investment managers to do their own research – which is exactly what Schroders does.

East Capital does this too – and it is much easier than before, says François Perrin, Hong Kong-based head of Asia, who describes the improvement in the reporting of ESG data as “very rapid”, ahead of the 2020 deadline for ESG disclosures.

East Capital assesses ESG performance through 60 questions. Perrin finds that about 60% can be answered without calling companies, with the remaining 40% requiring a call. The firm can generally secure satisfactory answers to all 60 questions.

This smooth process reflects a tendency remarked on by several interviewees: Chinese companies are becoming much more interested in how investors view their ESG performance. Smith of Aberdeen Standard gives the example of an A-share company where the firms had a “very full and frank discussion with management about related party transactions, corporate structure, and expectations going forward, before we invested… We felt that our views were being heard, and we’ve been very pleased to continue this conversation after we invested.”

Progress in disclosure is not exactly the same as progress in ESG performance, although one tends to encourage the other, by putting poor ESG performance under the spotlight. When it comes to performance itself, Perrin sees particular progress in the E, but also in aspects of the S and the G. He does, however, still observe weaknesses common to many companies. One of these is the party committee which every Chinese company must have. “It is a very important organ, sitting alongside the board of directors, but the problem is that it is very difficult to find any information about its composition and role,” he says.