For the first time in their careers, investment managers are having to give consideration to something they took for granted like working phones in their offices and sandwich shops in their lunch breaks: the system of interest rate benchmarks, which regulators want to change.

Failure to grapple with this challenge could hurt asset managers’ returns, expose them to risks they thought they had hedged, and leave their clients questioning their competence. However, tackling it presents many investment managers with “a critical and difficult body of work”, according to the Libor Transition Roadmap for Investment Managers – a joint report published by consultancy Oliver Wyman and the UK’s Investment Association, in February 2019. For some managers, “this programme of work is comparable in scale to MiFID II”, says Jennifer Tsim, partner in corporate and institutional banking at Oliver Wyman, an author of the report.

Investment managers can blame the traders who colluded in fixing the prices published daily for the London Interbank Offered Rates, (Libor). These are benchmark interest rates for short-term lending, for seven maturities, ranging from overnight to 12 months; the most common benchmarks are for one, three or six months. They also cover five different currencies – the dollar, the euro, sterling, Swiss francs and yen. The Libor rates, originating in the 1980s, are based on estimates submitted by a panel of banks every morning estimating what it will cost them to borrow from each other. The rates have an array of uses, including the pricing of floating rate loans and derivatives, benchmarks for investment mandates, and inputs for valuation models.

The Libor scandal broke in 2011, when it was discovered that traders had colluded to improve their trading returns by quoting dishonest estimates of the rates. It also emerged that banks had claimed they had borrowed at lower rates than the reality, because they wanted to burnish their credentials as borrowers during the credit crunch. Another problem was that liquidity in many of these interest rate markets disappeared during this time of crisis. This further reduced the reliability of the rates, because thinning liquidity made rates more dependent on estimates than actual trades.

In response, regulators agreed to replace Libor with a system based on completed trades for interest rates in the highly liquid overnight market. Euro-zone member states also demanded a reform of the euro’s own rate, Euribor, to make it more credible; its administrator, the European Money Markets Institute, is exploring various options. Member states also opted to scrap the benchmark overnight rate for euro rates, Eonia, and replace it with a broader measure: Eonia is based on actual transactions, but only those made by a panel of 28 banks. The new benchmark rates will be known by acronyms that nearly mirror girls’ names. Sterling Libor will be replaced with a version of the benchmark known as Sonia (Sterling Over Night Index Average); Eonia will be replaced by €str (Euro Short-Term Rate), pronounced ‘ester’, to be published in October; Swiss franc Libor will be replaced by Saron (Swiss Average Rate Overnight).

The end of the old benchmarks
The UK’s Financial Conduct Authority will not regulate Libor out of existence. However, it says that by the end of 2021 it will stop compelling banks to submit Libor rates. This move will sound the death knell for Libor, by reducing its credibility as a benchmark. However, from 2022 Eonia will no longer be valid in new contracts.

When taking a long-term view, many observers see the change as beneficial for asset managers. These benchmarks will be much harder to manipulate, and manipulation has generally worked in the interests of sell-side institutions rather than asset managers. The new benchmarks should also be less volatile because they are overnight rates, and so carry a lower credit risk. The joint Oliver Wyman and Investment Association report notes that although on average sterling three-month Libor has only been 31bps higher than Sonia over its history, it has risen to as high as 398 basis points above Sonia, in 2008. 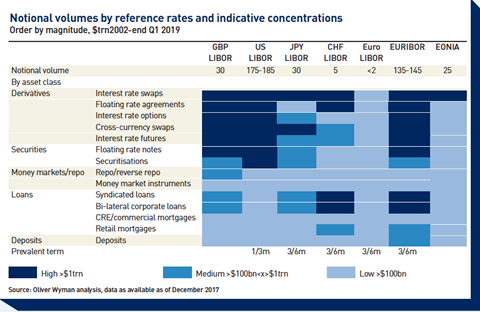 Jamie Macpherson, senior solicitor in finance at Macfarlanes, offers the following exhortation: “Investors should not lose sight of the motivation for undertaking the frankly enormous endeavour of weaning wholesale financial markets from their ready use of Libor: to address its diminishing reliability and robustness, particularly since the financial crisis.”

Perhaps the biggest problem with the transition to the planned new benchmark regime is that its users will not move in lockstep. The Sonia and Saron benchmark rates already exist but trading is low so that institutions are reluctant to switch. This creates a vicious circle: as institutions are reluctant to transition, liquidity remains thin, and the benchmarks look uninviting.

Owen Lysak, partner and expert in financial market regulation at Clifford Chance, explains asset managers’ quandary: “It’s hard to find sell-side institutions actually offering Sonia, and that makes it difficult to move across, so as an asset manager you’re left with a very tricky situation, because you’re both looking back and looking forward.” He adds that because of this, many asset managers are looking at their exposure to Libor transition issues, and wondering “where they can draw a line under that” by making the move to new benchmarks. But because many feel unable to leave the old benchmarks, their exposure to Libor transition issues grows.

But, even if asset managers are prepared to plunge into the new rates, without knowing the liquidity, the matter is not in their hands. Michael Huertas, co-head of the financial institutions regulatory practice group at Dentons, says that the sell-side institutions they deal with are moving at different paces towards adopting the benchmarks. He adds that by preventing asset managers from being able to grapple with the new benchmarks “in a more holistic fashion”, this “increases the time and effectively the cost in dealing with these matters”.

Moreover, because the rate is lower, it should flatter investment performance when used as a benchmark for funds: all things being equal, returns will, in terms of basis points, be somewhat above the benchmark than before.

However, asset managers could lose out in other ways. Tsim notes that investors in floating-rate loans and other products with an interest rate component based on a benchmark rate will be paid less, unless corrective action is taken, when these products use one of the overnight rate benchmarks, instead of a Libor three-month benchmark. Moreover, interest rate derivatives used for hedging purposes could leave investors partially unhedged, if a derivative remained priced with reference to three-month Libor, while a loan was switched to a new overnight benchmark rate – or vice-versa. Industry bodies are discussing a solution: changing the underlying benchmark for existing contracts from a Libor rate to new benchmark rate, and then adding a ‘spread adjustment’ to make up the differential. However, this has yet to be agreed by regulators, but a source close to discussions says progress is being made. There is, in conclusion, still much to sort out – and this is making asset managers nervous.