Listed companies paid a record $497.4bn (€435.1bn) in dividends in the second quarter of this year, according to Janus Henderson Investors.

The asset manager’s Global Dividend Index reported record dividend totals in 12 countries in the period, including for France, Japan and the US. European companies outside the UK paid a record $176.5bn.

Ben Lofthouse, head of global equity income at Janus Henderson, said the growth was mostly due to “ongoing economic and earnings growth”.

He added that, despite trade tensions between governments and regions, “we are still optimistic that in aggregate corporate earnings can continue to grow next year, and payout ratios in key parts of the world like Japan have scope to rise further too”.

“Dividends in any case are less volatile than profits, and we are confident that 2019 will see the global total continue to rise in underlying terms,” Lofthouse said. “The trajectory of the dollar may affect the headline growth rate next year, but exchange-rate fluctuations have little impact over the longer term.”

The company said it expected underlying total dividend payments to increase by 7.4% in 2018, compared with 2017’s total. In dollar terms the company did not change its forecast for the year, however, as the strengthening dollar was expected to offset this improvement.

According to consultancy group Mercer’s latest European Asset Allocation Survey, European defined benefit pension schemes allocated an average 28% of their portfolios to equities. This ranged from 10% in Denmark to 45% in Belgium. 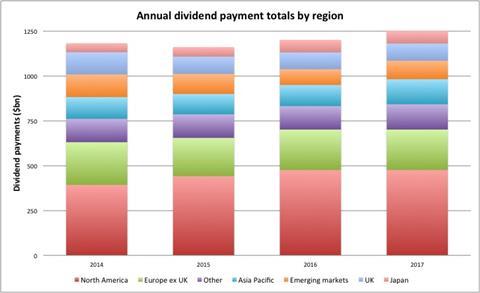