With the benefit of hindsight, there are still many unanswered questions about the French presidential elections in June. Of course, the relief at Marine Le Pen’s failure to secure the presidency is understandable, as is the financial markets’ apparent preference for Emmanuel Macron. But for anyone looking beyond the next few months there are many pressing points that demand investigation.

If the results are examined closely, some striking patterns emerge. On the face of it, Macron won a decisive victory with 66% of the votes in the second ballot against 34% of the votes for Le Pen. However, these figures are based on the votes actually cast for one of the candidates. It should not be forgotten that out of about 47.5m registered voters a record 12.1m of the electorate did not vote at all. Another 4.1m either left their ballot papers blank or spoiled them (see figure).

It is also important to remember that 10.6m people voted for Marine Le Pen in the second round. That is, almost 11m people voted for a party, the Front National, with at least a legacy that could reasonably be called fascist. Even if Le Pen’s strategy of dédiabolisation (detoxification) is taken at face value, a huge number of people still voted for a far-right party. Indeed, nearly twice the 5.5m people who voted for Marine’s father Jean-Marie in the second round of the presidential elections in 2002.

That still leaves the biggest question of all. Has the classic political division between right and left finally died? After all, the divide dates back to the French Revolution of 1789 when the king’s supporters stood to the president’s right and the revolution’s supporters stood to his left. Yet, for the first time since the Fifth Republic was instigated in 1958, there was neither a republican-conservative nor a socialist-leftist in the second round of the presidential run-off.

The crisis was particularly apparent among the centre-left Parti Socialiste (PS). The approval rating of François Hollande the outgoing president had fallen to 4%. Benoît Hamon, the PS candidate this time around, only received 6.4% in the first round of the election before being eliminated.

None of this is to take sides for or against Macron or his En Marche! (On the Move!) movement. Indeed, he explicitly ran as a ‘neither left nor right’ candidate in the presidential election. The organisation has been renamed La République En Marche for the upcoming legislative elections.

Nevertheless, it would be premature to assume that the geopolitical challenges facing Europe have passed their peak. On the contrary, there is a reasonable case that they have only just begun. If the left-right division has broken down, that would mark a historic shift. It could mean that, from now on, politics will take a less predictable form, rather than taking place within clearly defined terms. In any case, the trajectory of French politics and Western European politics more generally needs to be examined rather than assumed. In itself, Macron’s election victory does not answer the question. Nor will the results of this month’s legislative elections.

The remainder of this article will examine developments in France more closely as well as setting the scene for a broader discussion. Other pieces will examine the situation in the UK with the upcoming elections in Italy and Spain.

There are at least two key points that experts in French politics seem to agree on. They acknowledge that the recent presidential election was exceptional – although it is h ard to argue otherwise. The difficult question is whether it presages a new pattern of less stable politics for France and for Western Europe more generally.

Jacques Gerstlé, emeritus professor of political science at Pantheon-Sorbonne University in Paris, describes the recent presidential election as “the election of the first time”. In addition to the features identified earlier, he points to several more. These include the attempt to impeach Hollande, the outgoing president. It was also the first time that the French conservatives conducted presidential primaries. Then it saw the elimination of candidates with high political capital including Nicolas Sarkozy (a former president) and Alain Juppé (a former prime minister) on the right, and Manuel Valls (another former prime minister) on the left. “The election was exceptional in French political history,” says Gerstlé.

Prof Marc Debus, the director of the Mannheim Centre for European Social Research, takes a similar view. “This is a very astonishing result and it is related to the high degree of dissatisfaction of French citizens with their political system and also with the economic system,” he says.

He points to the Austrian presidential election last year as a similar result. Then, too, there was a second-round run-off between two candidates who were not part of the traditional left or right. In that case, Alexander Van der Bellen, an independent candidate and a member of the Green party, narrowly defeated Norbert Hofer of the far right Freiheitliche Partei Österreichs (FPÖ, Freedom Party of Austria). In both cases, there was “a high degree of frustration of a significant share of voters with the traditional parties”. In this context, it is worth noting that at the time of writing the Austrian government coalition had collapsed and the FPÖ was leading in the polls.

However, Debus is confident that it is possible for the mainstream parties to recover in both Austria and France. “What we know from research on political parties is that they learn,” he says. “They want to maximise votes for the next election so they learn. They adapt strategies of successful parties and they will most likely incorporate the preferences and positions of voters who did not vote for their policy in the last election.”

Sudhir Hazareesingh, an expert in French politics at Oxford University, takes a similar view. He argues that France has seen a realignment rather than a breakdown of the old model.

“Although people are sceptical of what is offered to them the way they see politics is still very much defined by how they’ve been socialised.”

However, not everyone is so sanguine. For example, Prof Gerstlé argues that a new cleavage – that between the winners and losers of globalisation – has come to coexist with the old left-wing distinction. From this perspective he points to Marcon as representing the winners of globalisation and Le Pen representing the losers. “We will probably now have a mix between the left-right cleavage and this other cleavage which has grown over the past 20 years,” says Gerstlé.

He points to a 2012 book, Political Conflict in Western Europe (published by Cambridge University Press), as outlining this concept. It is based on a detailed academic study of six western European countries by several leading political scientists from Germany and Austria. It is notable that the book was published well before the recent upsurge in what has become known as populism.

In the UK, a more recent book with a similar argument has caused controversy. David Goodhart, a commentator and former Financial Times journalist, has argued this year in The Road to Somewhere that politics is now divided between what he calls ‘Anywheres’ and ‘Somewheres’. In his view, the Anywheres dominate culture and society. They tend to be educational successes with good professional jobs and, as the label suggests, do not identify with any particular place. In contrast, Somewheres are more rooted and feel a sense of belonging to a particular location. Many of them feel left behind in contemporary society. 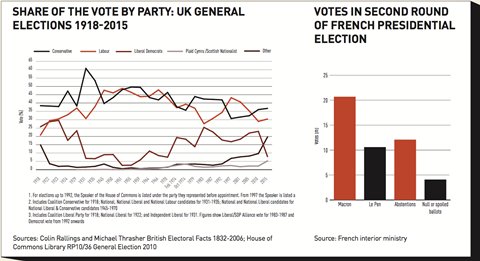 But, like the earlier study, Goodhart sees the new cleavages as coexisting with the old division of left and right. To put it another way, he argues that the old class politics will co-exist with the new politics of identity and culture.

However, others go further than Goodhart or the broader European study. They argue that rather than two sets of cleavages co-existing the old divisions are withering way.

For example, Chris Bickerton, an expert in European politics at Cambridge University, argues that the breakdown of the old representational politics has created the basis for something entirely new. Left and right are, in his view, losing their relevance. Instead, what has emerged is a new division between technocratic governments – exemplified by the likes of Macron – and populism. The former essentially emphasises efficiency pragmatism and a central role for experts. It dislikes what it sees as the ideological zeal of left and right.

In an article published in the spring 2017 issue of Juncture, the journal of the Institute for Public Policy Research think tank, he argued that the old system of French politics has irretrievably broken down. “A Macron victory, just like a Le Pen victory, would represent the collapse of the political mainstream in France and its traditional system of parties. It is unlikely that French politics would revert back to its traditional patterns and rituals.”

It is certainly clear that the centre-left is having serious problems across Europe even outside France and Austria. In the UK, for example, it looks likely that the Labour Party will perform poorly in the upcoming general election (see article in this report). And in the Dutch election in March, the Partij van de Arbeid (Labour party) saw a huge loss in its share of votes and seats.

If there is one important exception it appears to be Germany. There politics still seems to be divided between the Christlich-Demokratische Union (CDU) on the right and the Sozialdemokratische Partei Deutschlands (SPD) on the centre left.

But even in Europe’s economic powerhouse, there are signs that the old divisions are fraying. There was great optimism in the SPD when Martin Schulz, a former president of the European parliament, was announced as party chairman in March. Back then, there was even talk of a ‘Schulz-Effekt’. The idea was that Schulz would re-energise the SPD and allow it to challenge Angela Merkel’s CDU in the national elections in September. However, since then, the Schulz-Effekt has dimmed with a poor performance

by the SPD in three consecutive regional elections in Saarland, Schleswig-Holstein and North Rhine-Westphalia.

The existence of the centre left’s troubles across western Europe are fairly widely recognised. Much political debate focuses on how best they should reinvigorate themselves. Some argue that they should move further to the left to emphasise their distinctiveness, while others contend they should move in a more technocratic direction. Relatively few entertain the possibility that the crisis of the left could be terminal.

Less well understood is the fact that the crisis of the left could also mean serious trouble for the right. At present, the right seems fairly vibrant in electoral terms. Consider the likely decisive victory of the Conservative party in the UK’s upcoming elections.

The catch is that right and left were always defined in relation to each other. Historically, from the French Revolution onwards, the left represented radical change, whereas the right stood in opposition to it. But if the left ceases to exist, at least in its old form, it will raise questions about what it means to be right wing.

Those who work in the investment and pensions industry are, of course, free to express relief at Macron’s recent presidential victory. They can welcome the success of a political victory and the blow they see as being inflicted on populism. However, if they look at Europe from a longer-term perspective they might draw significantly different conclusions. It could be that the story of a fundamental political shift has only just begun.