In the world of equities, much of the complexity of risk assessment and management has been simplified through capitalisation-weighted indices and the growth of indexed funds on this trend. At first sight, it appears straightforward to apply the same approach to the management of fixed-interest assets.

Indeed, there has been a proliferation of bond indices produced by newspapers, brokers and exchanges, competing for attention. There are, however, many distinctions in the philosophical underpinnings of bond indices, as well as their practical implementation, that makes them different animals to deal with.

Every bond investor is essentially trying to avoid overvalued bonds where the risk of default outweighs the extra yield. A well-structured bond portfolio should be diversified across credits with no undue concentration in sectors or issuers.

A fundamental difference between equities and debt indices is that the amount of debt represented in an index is not sensitive to the market’s pricing. The credit spread forms only a small part of a bond’s yield except for high-yield or distressed-debt portfolios. As a result, the perverse outcome is that the weaker an entity becomes through the issuance of more debt, the more an index will weight that entity, even though its attractiveness is reduced. 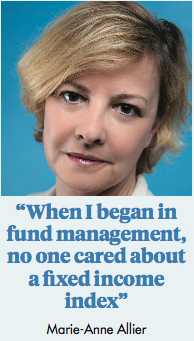 “The central issue with bond indices is that there is no economic justification for liability weighting and in this sense, traditional indices in fixed income are more flawed than in equities,” says Gareth Turner, investment specialist, quantitative beta strategies at JP Morgan Asset Management. But, as he adds, until the point that the issuer is near to default – or the market starts to worry about default – an investor will still clip the coupons, so the flaws manifest themselves as episodic point risk, such as in the euro crisis, when the problems of over-indebtedness in the European periphery were brought into sharp focus.

In theory, the fundamental flaws that lie behind bond index construction should not matter for active managers. “When I began in fund management, no one cared about a fixed income index,” says Marie-Anne Allier, head of euro fixed income at Amundi. However, that changed with the development of benchmarks for assessing even fixed-income managers. That led to the idea of being overweight or underweight relative to the index weightings and the idea of relative tracking error against the index performance. But, with many economies reaching the point where bond yields are likely to rise, investors are realising that following an index is not that important. It is better to get a positive return rather than follow an index downwards, says Allier.

Absolute return-focused bond strategies provide one way to deal with some of the challenges. But, says Turner, there is a significant amount of the market that does not want to – or cannot  – go down what is fundamentally an active approach to investing – 25% of emerging market debt hard currency assets are passive for example. “Building better indices provides an alternative way for investors who want a more systematic investment approach, less dependent on manager discretion, to access the asset class more effectively and potentially at a lower cost point,” he says. But, while there have been innovations in equity market indices such as smart beta, Allier argues that  such innovation has not been visible in the fixed income markets.

Any fixed income index design has to represent a trade-off between a number of factors such as coverage versus liquidity, and purity of methodology versus idiosyncratic risk. A large percentage of the total fixed income market is rarely traded. Very liquid indices with a narrow coverage are attractive from an index provider’s viewpoint since they can form the basis of lucrative derivative products. However, a bond fund manager needs to access the whole market and performance needs to be measured against that objective and risks controlled relative to the total market while limiting idiosyncratic risks.

Allier sees several problems when it comes to fixed income indices. The first one is that in the equity markets, companies have just one equity share class while a company can have multiple bonds. As a result, gaining exposure to any company requires choices to be made over maturity and currency. That will drive fund performance rather than the company selection.

Secondly, in fixed income generally and especially in investment grade, the performance of different indices is highly correlated. The main driver of performance for any portfolio is the duration and the evolution of yields across the maturity spectrum so what dominates portfolio performance is not the credit selection.

The third problem is that the cost of liquidity is high, so rebalancing becomes expensive.

The structure of bond indices divided by maturity, credit rating and currency can give high turnover. While currency does not change (at least not often), bonds all mature and fall out of each sub-index on a predictable basis while new issuance also gives rise to instability. To reduce these effects, index providers either have to subjectively choose a basket of securities to represent the broad market, which means a small number of issues and a high specific risk, or they have to use a rules-based approach that includes all securities that fall within defined constraints.

Such an approach can also cause problems. Corporate high-yield indices suffer from ‘fallen angels’. For example, debt from large highly rated companies that suffer a downgrade take up a disproportionate amount of an index.

There have been attempts at setting up GDP weighted indices, for example. But the performance of these compared with other indices has been highly correlated, says Amundi’s Allier, which reduces their value. Limiting idiosyncratic risk is a challenge when a few issuers can dominate markets.

There have been many attempts of varying sophistication to resolve this problem.

A recent example is a revision of its emerging market debt indices by JP Morgan. Idiosyncratic binary risk is removed by extracting the riskiest countries (today, that might be Argentina and Venezuela). The remaining issuers are then allocated in a way that achieves a more diversified exposure. The firm then addresses the trade-off between the credit quality versus the duration of the index. This approach, says Turner, generates better risk-adjusted returns without sacrificing yield.

What is certain is that index providers will continue to attempt to produce new fixed-income indices even if they are not as prolific as in the equity sector. The challenge they face is to ensure that any new index which requires rebalancing every month does not see any potential benefits eaten away by underlying transaction costs.