Emerging markets (EM) have endured a difficult summer. Market sensitivities were heightened by fears of a trade war and the reality that the US Federal Reserve will keep raising interest rates. The flashpoints in Argentina and Turkey have focused attention on the EM universe, particularly the more vulnerable economies with less healthy fundamentals.

Financial markets across the developed market world have remained steady, with fears of contagion being kept at bay. Economic data has been steady rather than stellar.

This year’s Federal Reserve Bank of Kansas City’s Jackson Hole Economic Policy Symposium of central bankers did not have observers hanging on its every word. There was debate as to whether the keynote speech from Fed chair Jerome Powell was, or was not, dovish. Perhaps this reflects a more secure global outlook, EMs notwithstanding.

The US economy remains a key point for investors. Though this economic recovery has been one of the longest, it has also been one of the weakest in over 60 years. Yet the S&P 500 index is still rallying, more than a decade after the financial crisis began. According to measures such as the Chicago Fed’s (Adjusted) National Financial Conditions Index, US liquidity conditions – despite the Fed having raised rates by nearly 200bps – are still loose, and the Fed still has some way to go to tighten.

Asset purchases from the G3 central banks – representing the US, EU and Japan – are positive and not projected to become negative until mid-2019.

EM economies, particularly those with large funding needs, have started suffering the consequences a reduction in liquidity from the Fed. Certain assets, perhaps in the US tech sector, still have further to run, but for others the fuel is running out. 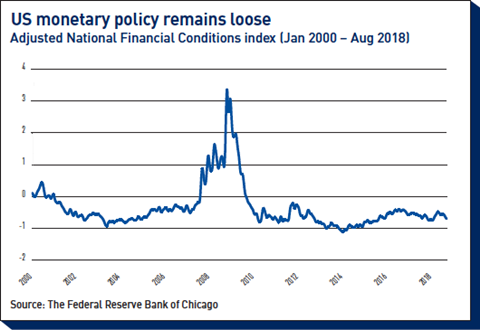 The US yield curve has continued its multi-year, post-financial crisis, flattening trend, with a flat curve priced in by 2020. There seems a widespread consensus that this trend is not part of a curve inversion. The message from today’s curve is not the (historically) normal harbinger of recession.

There are debates as to which US curve has the strongest predictive powers. As well as the commonly used 10- to 2-year (10yr-2yr) slope, analysts also use 10yr-3m and the 5yr-3m. Another measure, recently advocated by the Fed, focuses on the shorter end, using spreads between the 18m rate, 3m forward and spot 3m rates.

Looking at short-term forward rates may be a more precise gauge of where the recessionary signal might lie, as a bond’s yield reflects an average of the forward rates over the term of that bond. However, although this near-term measure appears to be statistically better than other measures, it has previously sent false alarms. That was most notable in 1998 as the Long-Term Capital Management hedge fund was collapsing. Indeed the Fed suggests recession predictability may be a function of already formed investor expectations.

Collateral effects of current monetary policy include low long-term interest rates, and not just in the US. The forces involved include central bank purchasing, shrunken term premia and the myriad of regulatory changes.

With only the Fed starting to reduce its balance sheet, and both the European Central Bank (ECB) and Bank of Japan (BoJ) programmes more than offsetting the Fed’s liquidity removal, global liquidity remains plentiful. So the changing shape of yield and money market curves are still informing us of something. But in today’s unusual world their messages are even harder to discern.

Trade tensions have added to the risk-off sentiment. Though the Trump administration has pointed its tariffs gun worldwide, it is at China that tariffs are being mainly directed. That is possibly before aim is shifted towards Japan. Of course, in today’s highly interconnected world, with so many economies involved along so many global trading chains, a bilateral trade war cannot really exist. If there is to be a trade war, it will be global.

China’s policymakers have been shifting to a dovish policy, with reduced interest rates and increased infrastructure spending. As for the renminbi, observers are optimistic that with the countercyclical adjustment factor, announced in 2017, currency communications will gain credibility. With a modest slowdown in economic activity and clearer currency management, the hope is that downward pressures on the renminbi will lessen.

The depreciation of EM currencies has been broad and sharp. August’s declines represented the steepest monthly falls seen over the past decade. The ‘beneficiaries’ of the EM unwind have been the funding currencies of Japan, the euro-zone, Switzerland and the US. The trade-weighted dollar has now appreciated 6% from its January low, a move which will not placate the US president.

The Fed may start to worry about the strength of the dollar as it did over 2014-15. However, this seems less likely as inflation expectations are higher than four years ago. Energy prices seem stable, in contrast to the halving of oil prices between June 2014 and end-2015, and the US economy is firing close to, if not at, full capacity.

While Jackson Hole 2018 did not grab as many headlines as in previous years, plenty of the presentations at the ‘Changing Market Structures and Implications for Monetary Policy’ symposium were thought provoking.

A paper from Alberto Cavallo*, a professor at Harvard Business School, concerned the way the internet is changing retailers’ pricing behaviours. This in turn may have long-lasting influences on aggregate inflation dynamics.

The ‘Amazon effect’, describing the changes to retailing emanating from online commerce, has been well documented. The effect is sometimes invoked to explain, in part, the relatively subdued inflation over the last few years.

Cavallo examines the pricing decisions made by online retailers. One of the findings is that online commerce now facilitates a much higher frequency of price changes and increased uniformity of prices across locations. He also observes that online retailers can and do react faster to nationwide shocks, than ‘bricks and mortar’ retailers.

He makes the point that this increases the sensitivity of prices to supply-side shocks, that is changes in macro data such as nominal exchange rates, or import tariffs or fuel costs.

Cavallo suggests that because prices are now less insulated from nationwide shocks, price impacts will also arrive faster and could be larger than before.

Retailers are increasingly using algorithms to make pricing decisions. As a result, policymakers will have to adjust their models away from those referring to more traditional rigidities such as labour costs. So exchange-rate moves, or maybe trade tariffs, may be showing up in policy-influencing price indices sooner than expected.