Unsurprisingly for anyone who has caught a news broadcast during 2014, 20 of the investors polled for this month’s Focus Group think that political risk has increased over the past 12 months, with the five remaining funds saying it has stayed about the same. None feels that it has decreased.

However, different investors interpret political risk differently, and different kinds of political risk are given different levels of priority. The forthcoming vote on Scottish independence is mentioned by two UK funds – including the survey’s one Scottish fund. Continental European funds appear not to be talking about it.

This is further reflected in the fact that, while five funds say they draw no distinction between local and overseas or global political risks, most agree with the UK fund that does.

“Local political risks tend to dominate discussions, not the least of which is our LDI strategy focusing largely on domestic investments,” it says. “Global or overseas political risks are important, and we sometimes need to take a stand on where we want to be in the world, but in general we are buying beta in the equity markets and we are generally not timers, so we tend to roll with the punches in the small part of our portfolio that is exposed to the greatest geopolitical risks.”

When it comes to actual discussion and action, funds have spent most time discussing general macroeconomic themes, pensions regulation, and financial regulation. Less time was spent on worldwide central bank independence, inequality and socioeconomic justice, and central bank independence. Geopolitical risks came somewhere in the middle of the scale.

Respondents are split as to whether political and geopolitical risks can be fully integrated into a fund’s investment decisions. One Dutch fund believes they cannot. “You can’t construct a portfolio based on risk scenarios. However, we try to construct robust portfolios that can hopefully weather bad times. We realise that diversification can’t shield you from all scenarios, so tail hedging can be an attractive instrument for controlling risks.”

However, a Swiss fund disagrees: “Political and geopolitical risks must be integrated in the fund’s overall portfolio construction process. Today, politics is as much of a risk factor as economics, and it behooves CIOs to act accordingly.” 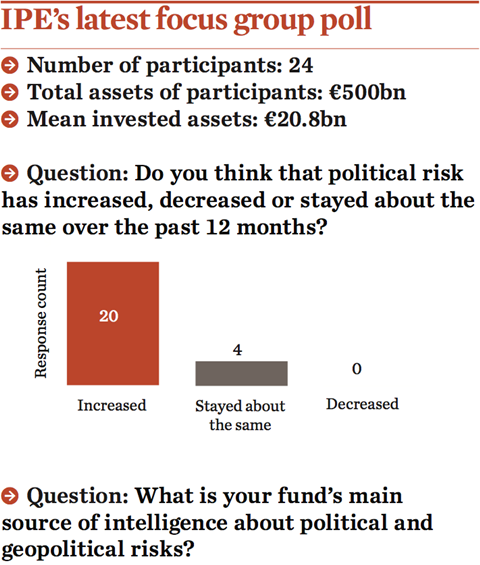 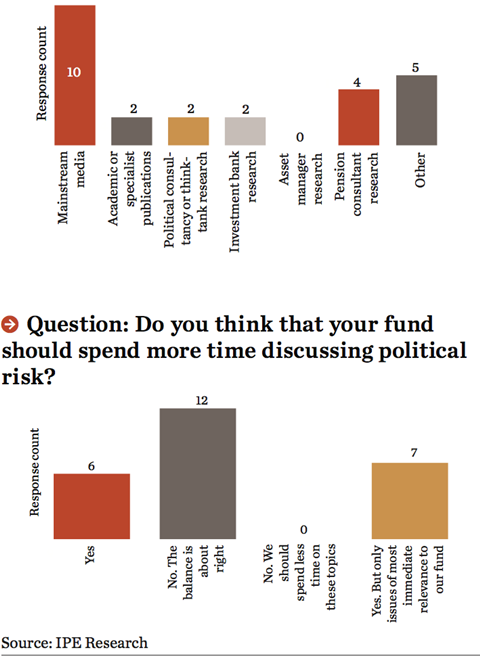 The balance is struck in the fact that, while over half of respondents think their fund should spend more time discussing political risk, seven of these think the focus should be on issues of most immediate relevance to their fund.

“Most people assume that things will bump along as they are, and then something like the recent UK budget announcement comes,” said a UK fund, recalling that country’s recent pensions revolution. “This sort of event is more common than most people think, and some of it can be anticipated and contingency plans made.”

For three-quarters of the funds polled, the way they manage political risk is not currently a topic of discussion. A UK fund commented: “Most of my colleagues do not see their discussions as dealing with political risk. Rather they are dealing (constantly, it seems) with changing political reality.” A Dutch fund added: “[It is] not a big issue with management. They tend to be more reactive than proactive.”