Just over half (16 respondents) of the investors polled for this month’s Focus Group currently allocate assets to strategies that employ risk-factor investing concepts, with an average of 14% of their portfolio managed in this way. Of these, seven are considering further allocations.

“Approximately a third of our equity portfolio is invested in a risk factor scheme,” says the CEO of a Dutch fund.

“We [have] been allocating to a risk-premia portfolio since spring 2014 and are considering adding another mandate,” says a Swedish fund.

Thirteen funds are not currently allocated to risk factor investing, although eight are considering it. “[We] avoid strategies just to obtain 0.3-0.4% more than traditional benchmarks, but [also] to enhance the overall risk/return profile of the portfolio,” comments an Italian fund.

Seven funds (just under a quarter) describe factor investing as a cheaper way of getting active investment returns. “[We are] systematically chasing persistent risk premia, combining multiple factors in an efficient way [with] no standalone factor allocations,” says a Dutch fund.

“In up-markets, low volatility should underperform. That will be compensated in down-markets. So, [it is] no problem to underperform for a longer time, as that should mean the assets are doing well”
Head of investment strategy at a Dutch pension fund

Most respondents do not see risk factor investing as adding to governance strains, with a UK fund stating: “It lessens governance requirements due to its quasi-passive approach”. However, the CIO of a Dutch fund says, “It adds to the complexity in terms of underlying investment approaches, the number of managers (more managers), [and] discussion on [the] costs involved.” 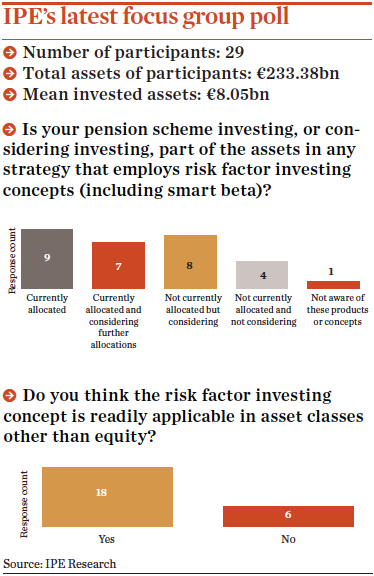 Three-quarters of those polled think the risk factor investing concept is readily applicable in asset classes other than equity, with a Swedish fund going as far as to say: “You can apply the concept to almost all asset classes”. A Danish fund disagrees: “The strong academic background behind the risk factors in equity simply is not present for other asset classes”.

Only three funds have allocated to risk factor products for corporate bonds; two each for commodities, currencies and hedge funds; and one for government bonds, while five respondents have not allocated to any of these.

Half of respondents are prepared to accept underperformance of part or the whole of their risk factor portfolio for longer than a year. “In up-markets, low volatility should underperform,” says the head of investment strategy at a Dutch fund. “That will be compensated in down-markets. So, [it is] no problem to underperform for a longer time, as that should mean the assets are doing well.”

Seven funds accept underperformance for up to a year and five funds up to six months. “The problem is to avoid drawdown, not to have a greater return,” states an Italian fund.

Just one fund says it has considered a risk factor investing approach, only to reject it. The senior vice president of this Danish fund comments: “Value, size and low volatility [were] all rejected in a smart beta version and invested through the smart alpha concept”.