Funds invested in illiquid assets are ‘built on a lie’: Mark Carney [updated]

Funds with daily liquidity that invest in illiquid assets are “built on a lie”, according to the governor of the Bank of England (BoE).

Appearing before a committee of MPs today, Mark Carney said he and other senior officials at the central bank had been raising concerns about illiquid assets for some time, relating to a “potential developing systemic issue”.

“These funds are built on a lie, which is that you can have daily liquidity for assets that fundamentally aren’t liquid,” Carney said. “That leads to an expectation that it’s not that different to having money in a bank… so you get a series of problems: you’ve got a structural problem, but then you have a consumer issue.”

He added: “This is a big deal. You can see something coming that could be systemic.”

Carney said he was not commenting on a specific issue, but his comments followed the high-profile suspension of a UK equity fund earlier this month. 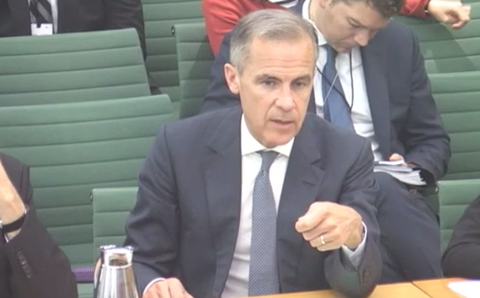 “This is a big deal. You can see something coming that could be systemic.”

The assumption of daily liquidity, Carney told the Treasury Select Committee this morning, relied upon ongoing market liquidity, which in turn depended on monetary policy being “infinitely accommodative”. “That’s just not going to be the case,” he said.

Pressed on the issue by Nick Morgan, chair of the committee, Sir Jon Cunliffe, the BoE’s deputy governor for financial stability, added that the mismatch between redemption periods and underlying liquidity of assets was “a global issue”.

He cited the example of retail money flowing into asset classes such as high yield bonds and emerging market debt.

“These are relatively illiquid markets compared to equities,” he said. “If there was an investor loss of confidence in an asset class and you started to see redemptions, the question is could those redemptions actually be made without large crashes in prices or alternatively suspensions and gates.”

Sir Jon warned that international regulators such as IOSCO and the Financial Stability Board did not have the same level of understanding of fund liquidity as they did with the banking system.

“We need some consistent application of matching underlying liquidity better to redemption periods,” he said.

UK-domiciled real estate funds were hit in 2016 in the immediate aftermath of the country’s referendum on its EU membership.

This morning the UK’s asset management trade body unveiled plans to create a new fund structure specifically designed to invest in illiquid assets. The Investment Association said the structure would be designed for investors such as defined contribution schemes to invest in less liquid asset classes in an open-ended fund format.

Following Carney’s comments, Chris Cummings, chief executive of the Investment Association, said: “The UK fund industry offers more than 8,000 funds in a highly regulated environment to cater to a wide variety of needs for consumers, and offering options with daily liquidity is a crucial part of that mix.

“There are also cases where investment on a longer-term basis, with less frequent redemption intervals, will be more appropriate, which is why we have today outlined our plans for a long-term asset fund. This new type of fund structure will enable investment in a wider range of assets, giving greater choice and unlocking new long-term investment opportunities for savers and providing companies and infrastructure projects with much-needed funding.

“Investment managers and fund operators take their duties to consumers very seriously and we look forward to engaging with the governor on this issue.”