In its recent Annual Economic Report, the Bank for International Settlements (BIS) – the central bankers’ central bank – argues that it is time for a more balanced policy mix to promote a sustainable expansion. But the path ahead is narrow and a key risk is that even small changes in the inflation outlook – or monetary policy response – could elicit an outsized market response. Compressed, even negative, term premia point to the potential for a quick and sharp reversal – a snapback.

Perhaps it is not surprising that markets have so far failed to react to the BIS. Capital markets do not generally pay much attention to its reports, says Myles Bradshaw, head of the global aggregate fixed income team at Amundi. Fund managers are more focused on players that can move markets. “What the Fed says matters, what politicians such as [Donald] Trump, [Angela] Merkel say, and central bankers like [Mario] Draghi,” Bradshaw says. “The BIS produces useful research but it doesn’t mean that, as a result, someone will do something that will affect market pricing.”

Isobel Lee, a global fixed income fund manager at Insight Investment, is even more scathing. “Markets have the view that some of the official bodies have cried wolf many times over the past 10 years.” Many economists, she points out, have overestimated the likelihood of rising inflation and, as a result, markets have been reluctant to price it as a serious risk without more evidence.

But not all managers are so dismissive of the danger. Axel Botte, a strategist at Ostrum Asset Management, says markets are not prepared for an imminent snapback.

The BIS argues that while so far inflation has been unresponsive to the continuing tightening in product and labour markets, at some point pressures could mount and inflation could surprise on the upside. It accepts, though, that while inflation surprises cannot be ruled out they are unlikely to be large. Secular structural forces keeping a lid on inflation are not about to vanish. 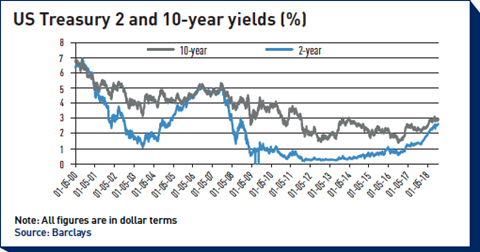 The danger arises because investment strategies such as benchmark-hugging and other forms of herding can amplify market moves while also leading to systematic underpricing of credit and liquidity risks. This underpricing could be more severe in sectors and countries where debt levels and credit flows have grown strongly post-crisis.

The BIS worries that a snapback could be rapidly transmitted to other bond markets, especially if it started in the US, given the dominance of the dollar. As Arnab Das, global market strategist at Invesco Asset Management, points out, much of the world – especially the large economies with deep, liquid bond markets – remains financially and economically integrated with open capital accounts. That means no one country is likely to fully escape these issues through its own divergent policies or actions.

A second BIS concern is the reduced extent to which lenders could absorb any credit losses after the global financial crisis, while a third factor is the growth of foreign investors in local markets. The latter makes markets more vulnerable to a reversal in flows and an evaporation of liquidity in times of stress, leading to sharp price moves as the number of sellers overwhelms the capacity for the market to absorb them.

For active managers, such events can be sources of opportunity as they are temporary. Bradshaw argues that passive investors are investing in bond markets where the average duration has been extended because the supply of long-dated bonds has increased and the low yields means duration has increased, so they have become more risky. 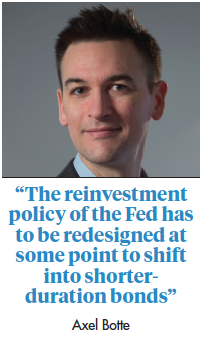 As Das points out, the extension of duration of liabilities in a low or falling-rate environment also encourages asset portfolio extensions by duration-matching, liability-driven investors. But he suggests a snapback in yields would be harder to achieve in a low-rate environment; inflation surprises would have to be more significant or sustained than in higher-yielding initial conditions. Moreover, he says the reason why there is a prolonged low-yield environment should be ascribed to a “savings glut” world – which implies deflationary or at least disinflationary pressures that constrain yields from rising and promote duration extension.

The BIS might not be sounding a false alarm if Botte’s analysis holds true. The catalyst for such a snapback, he says, would be a material change in the monetary policy of the US Federal Reserve. The Fed has a $4trn (€3.8trn) balance sheet and only about $45bn in capital, which acts as a substantial constraint on its actions. “They have to raise interest rates further because inflation is rising, but they can only do that up to a point,” he says.

The Fed is reinvesting proceeds of maturing bonds by buying bonds in proportion to the amounts issued right across the maturity spectrum even as it pursues a policy of returning to a more normal framework of monetary policy whereby they should only own short-term Treasury bills. “The reinvestment policy of the Fed has to be redesigned at some point to shift into shorter-duration bonds. That change has even been alluded to Governor [Jerome] Powell,” says Botte. Such a change could prove to be a catalyst for a snapback.

Even if the risk of a snapback is low, the underlying inflationary pressures still exist while consensus forecasts are still modest at about 2% in the US. “It is a risk that the market doesn’t price in,” says Bradshaw. He is keen on US inflation-linked bonds, as a result, with the market prices implying US inflation of about 2% for the next 30 years.

In a central scenario, such valuations look reasonable with real yields positive in the US and still negative in Europe in July. “If inflation hits target levels, you will get the same return on inflation-linked bonds as on nominal. If the inflation risks are realised, you will get a much more attractive return, so there is an asymmetric risk/return profile for us,” he says. Managers also look to the changing spread between two-year and 10-year US Treasuries as a potential source of added return. In July, spreads had shrunk to under 30bps encouraging managers to go overweight two-year bonds and underweight 10-year bonds.

Bradshaw echoes the views of many managers that while there may be a risk of a snapback, the most likely outcome is a gentle rise in yields. But the BIS is probably right to raise a warning.