One of Sweden’s state pension buffer funds was targeted by activists from campaign group Greenpeace last week in a protest which included the occupation of a meeting room.

The Swedish branch of the environmental organisation is currently conducting a campaign aimed at persuading the four main AP funds to divest from their coal, oil and gas stocks.

AP3’s central Stockholm offices were invaded by the activists early on Wednesday morning, who then locked themselves in a meeting room and hung up paintings “to remind the AP funds that they, as state authorities, must live up to the laws and objectives decided by the Swedish Parliament”, according to a Greenpeace press release.

Meanwhile, other protestors from the group went onto the roof and hung a large banner on the front of the building with the slogans “lyd lagen” (obey the law), and ”flytta pengarna” (move the money).

The campaign group argued that the funds, through their large holdings in coal, oil and gas companies, were acting against the Paris agreement on climate change as well as certain national laws and agreements. 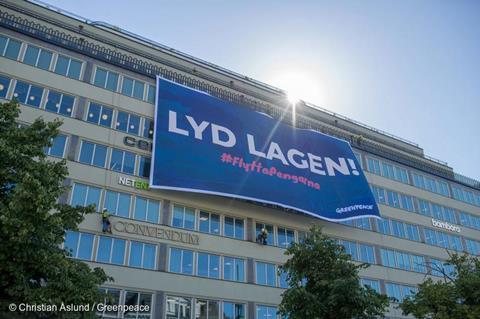 A spokeswoman for AP3 said: “Greenpeace haven’t had an honest intent and therefore the prerequisites for a dialogue do not exist.”

The AP funds are well-known for their emphasis on environmental issues and sustainability within their investment activities, as well as taking a leading international role in ESG campaigns.

Their mandate is currently in the process of being reformed, and includes new legal requirements for the funds to be managed in an “exemplary manner” with regard to responsible investment and responsible ownership.

In February 2017, AP3 reported that it had doubled its holdings in green bonds in 2016 SEK9.5bn, and is one of the largest Nordic investors in the instruments.

In March this year, AP3 and AP4 were among the backers of a $1.42bn green bond fund, which was said to be the largest such fund launch up to that point.

AP2, AP3 and AP4 were also among 60 investors earlier this year to support an engagement project to push international food companies to use more non-meat-based proteins.

AP1, AP2, AP3, AP4 and AP7 are all members of the Institutional Investors Group on Climate Change, while all six funds in the AP system – including private equity specialist AP6 – have all signed up to the UN’s Principles for Responsible Investment.

Note: This story was updated to include a comment from AP3.