This article explores from an actuarial perspective the impact of low interest rates on the retirement planning of the average person in the world’s rich countries.

Narrowing the scope and looking at Germany first, the fundamental reform of the state pension in 2001 (the so-called Riester reform) reduced the long-term level of state pension and simultaneously introduced incentives to save via funded company (second pillar) or personal (third pillar) pensions.

This shift away from the state pay-as-you-go system to funded arrangements was generally applauded at the time since it reinforced the then conventional wisdom that funded arrangements were more durable and efficient for long-term saving. Since the effects of the credit crunch in 2008, however, this premise is subject to serious question.

It is generally accepted that the sustained low-interest-rate environment was caused, and is being upheld, primarily by the monetary policies of central banks since 2008. Apart from providing debt relief for governments, this has placed significant pressure on second and third-pillar savings, mainly owing to the lower expected investment yields that will necessarily result in lower expected retirement income from these sources. 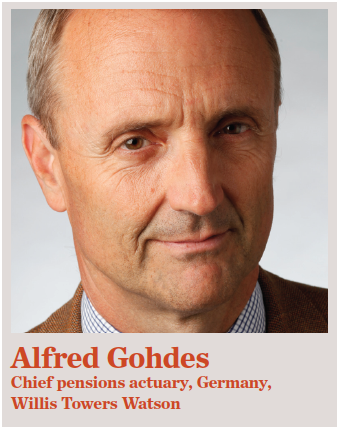 Assuming contributions to the three pillars remain the same in real terms, retirement income in the long term can generally be expected to decrease from all three sources – policy-driven in the first pillar (most countries have reduced state pensions) and market-driven in the second and third pillars.

The impact on the second pillar may be mitigated in those situations where a considerable portion of an employee’s benefit promise is defined benefit in character. But this has put these pension plans under pressure because the sponsoring employers are typically required to meet their commitments despite enormously increased costs.

With the low-interest-rate environment expected to persist for some time to come, the second and third pillars have become more expensive to fund. Poverty in old age can therefore be expected to increase in the rich countries.

In its most simplified form, a funded life-long pension payable from a given retirement age can be considered as an arrangement under which financial resources are accumulated (the saving or accumulation phase) and then successively discharged to the final beneficiary’s death (the pension or decumulation phase). Of course, the arrangement can be significantly more complex – for instance, if the two phases are superimposed over a period of time.

The arrangement is primarily dependent upon the following parameters:

• The amount of payment over the course of the two phases (savings and pension payments are assumed to be inflation-linked and the two phases separate);
• Investment return;
• Duration of payments (in particular longevity).

Apart from the amount of payments, the longer the combined time period of the two phases, the greater influence the following unknown factors will have: investment return; pension trend (the inflation rate for the purposes of this article); and, longevity.

Investment return and inflation are mutually dependent parameters, the key variable being the real return – the nominal investment return reduced by inflation. From an actuarial point of view, these core parameters have experienced similar changes in all rich countries over the past 20 years. In Germany, the changes have been as follows:

• Changes in the real investment return represented here by the observed return on long-term government bonds and the capital market’s long-term inflation expectations from 3% a year then, to minus 1% a year now;

• Changes in longevity assumptions typically applied to occupational pensions then and now;

To consider the effect of these changes over time, I have assumed the expectations1 prevailing at the beginning of the accumulation period to apply for the entire period of the arrangement.

For those who have already reached the retirement age of 67, the corresponding increase in cost amounts to ‘only’ double (2.2 times) rather than 3.1 times the original expected cost. This is because the duration of the entire arrangement is shorter than that of the 35-year-old.

More typically, an individual will not fund his pension with only government bonds but with a mix of real investments, such as equities and bonds and traditional insurance policies. The cost increase will apply similarly here, since the reduction in expected real investment returns will be of the same order2.

Finally, what has been calculated here for Germany should broadly hold true for other rich countries too, owing to a similar drop in real returns.

The main reason for this increased cost is not increasing life expectancy or a reduction in retirement age but is rather the strained capital markets globally, caused primarily by the policy actions of the global key central banks in the wake of 2008.

Although these actions quite probably avoided the collapse of the world’s monetary systems and a subsequent painful global recession, they could be causing equally painful effects elsewhere, with the only difference that these effects are less obvious and unfolding more slowly. Low interest rates are also allowing states to reduce their debt burdens significantly by reduced borrowing costs.

With the reduction in state retirement provision since 2001, young people in Germany now carry significantly more – 50-100% – of the burden of providing for their own old age. In addition, the expectation of the cost of funding for every €1 of pension has risen dramatically since 2008.

Although the increase in cost has been calculated on the assumption that investments are in the form of government bonds and are specific to the situation in Germany, the findings can be applied elsewhere.

What remains to be done? I would not consider either resignation, mandating second-pillar arrangements or increasing state pay-as-you-go pensions as solutions. Perhaps honest and robust planning for retirement may be a constructive route to follow.