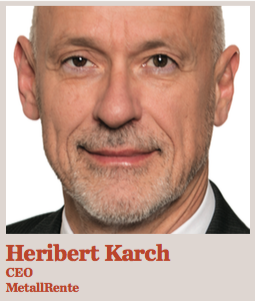 A few months ago, if someone had asked me to tell them about Deutschland-Rente (Germany-pension), I would have attempted to explain our state pension system to them. The state system implicitly deserves the monopoly over such a broad term as this as it is the only one that is, by and large, truly universal. But new (or redefined) terms are there to create narratives.

And this aim becomes apparent when two Christian Democrat (CDU) ministers and one Green from the state of Hesse come forward with the suggestion for such a Deutschland-Rente, a standardised supplementary pension that would be backed by the federal state (hence the name), to be run by an independent state fund with employees automatically enrolled under an opt-out system. Despite greater positive perception, the narrative espoused by the former federal labour minister Norbert Blüm that “the state pension system is secure” has been done away with.

I have never heard such a bold diagnosis from the political sphere. In short order, three ministers appear, with expedient optimism, to sweep away self-ordained illusions about successful and widespread individual pension provision. The three ministers say that everyone in Germany will suffer unless clear, decisive measures are enacted soon: the state, employers and employees. But most of all, employees will suffer, as they will be threatened with low or poverty-level pensions because measures will be adopted too late to mitigate the effects of the cuts of the last 15 years. Thanks to the ministers for such a clear diagnosis.

Now for the ‘but’. Of course, anything is technically possible. However, this suggestion would be the most complicated for lawmakers by some margin, and there would be no help for employers or employees. The risks are a mix of technocracy and politics.

“At first glance, the Deutschland-Rente concept seems good. But it does not bear further scrutiny”

Fair, sensible competition is an imperative and there should be no competitive disadvantages for providers. Current providers in the pension system have nothing to fear from competition, but they would from a state-backed fund. These are worst imaginable starting conditions for building up a stock of capital from scratch given the prevailing low-interest-rate environment. The equity market data that the authors have taken the trouble to obtain to provide an optimistic outlook changes nothing. This is not a greenfield site; we are in a developed landscape. No such state-managed money could start off with a 100% allocation to equities. Not just existing Pensionsfonds with a relatively high level of equities but also the conservatively allocated assets of the insurers have the relative advantage of diversification and long-term bonds.

The expected rate of return of the Norwegian sovereign wealth fund is not a reference point that guarantees success through published numbers, as it has probably the most favourable framework and the lowest conceivable costs worldwide. Sweden’s AP7, with its higher equity investment levels, sees the world differently. And Britain’s NEST has an annual management charge of 0.3% and a contribution levy of 1.8%, which is a considerable multiple of the Norwegian fund. Norway cannot be imitated, Sweden ought not to be and NEST definitely not.

The Deutschland-Rente would promise nothing. It is entirely based on defined contributions, so employers’ deferred liability for pension benefits can be done away with. In reality, employers can live with one-off payments, just as they do with salary payments, but are less willing to deal with risks that they cannot measure, hence the understandable wish to ‘pay and forget’. But there are two sides to this behavioural economic picture. ‘Pay and forget’ for employers is ‘set and forget’ for employees. So should the state really set up a pension system with no minimum level of security without precise return expectations and in competition with providers who must offer guarantees?

The legitimation of state intervention not only endangers the risk levels of investments but also the ethical aspects. It could be highly controversial to accept ethically doubtful equity investments, not to mention some alternatives, emerging markets or commodities.

The source of new contributions for the Deutschland-Rente would be employees, jeopardising those whose financial weakness the authors themselves diagnose. To capitalise on people’s apathy, extensively referred to in behavioural economics, employees would be enrolled in this scheme at their own expense. Here the analysis contradicts itself with its conclusion: there is insufficient money! Auto-enrolment with opting out can function well, but only when the parameters are correct. It was attempted in Italy with a hasty and poorly conceived process that led to mass opting out. Even in the economically liberal UK employers must top up half of the employee contribution. What level of contribution would be acceptable when imposed by the state? Too high a level would never be accepted; too low would create an illusion of sufficiency.

The authors of the Deutschland-Rente concept points to the urgency for political action. This can only be supported. There is no time for simply devised would-be solutions that only create more complexity and there have been similar proposals in other guises. We have seen it all before. Even the name is not new: it has already been registered by an online shopping group.

None of this would be a problem, and the debate would probably peter out if there were not a real risk that this policy could make its way into the next federal coalition agreement. Let us be clear: all this assumes the current coalition makes little or no headway towards meeting its promise to support occupational pensions, that the current grand coalition does not continue after the election and that a CDU-liberal coalition is not an option. But this attempt at a new narrative for pension politics could represent a test path for a CDU-Green coalition.

At first glance, the Deutschland-Rente concept seems good. But it does not bear further scrutiny. The extremely high risks, the threat of a legitimacy trap for the state, and a lack of broad acceptance, are impossible for the proponents to ignore. Many will join in this debate and it will take time that we do not have given the pressing need to solve these problems.

The governing federal coalition is working intensively on a solution across two ministries. Two large-scale assessments are pending. In my assessment, if nothing is forthcoming in this coalition then the fault will lie more with the divergence of interests rather than with a lack of will and regulatory creativity of civil servants.

What role does a concept like Deutschland-Rente play two years after the start of an intensive debate initiated by the ministries themselves? Given the limited lifespan of the coalition, this concept will act as a disruption for those in the affected ministries who are feverishly attempting to find a workable supplementary policy that can be put into place before the end of this legislative period.

We will only have three months to bring a long-standing debate to a head. This would then leave six months for a legislative process as next year the focus will be on the forthcoming elections. Politicians will then be out canvassing so they will not have the mindset for the finer details of a topic of such great importance for Germany.

Let us leave the current government to its agreed tasks before we write a cheque for the next one.