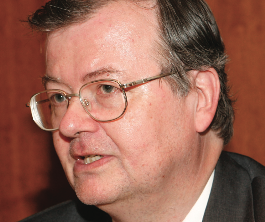 Political parties emerged in the years leading up to the French revolution of 1789. Liberals wanted sovereignty to belong to the people, conservatives said it was a prerogative of the ruler. In a series of revolutions, liberals eventually prevailed. The system was thoroughly upset by the advent of Marxism in the 1840s. That movement eventually split into radical communism and mainstream socialism. However, by that time, voting systems had evolved towards representing distinct political camps – socialism and liberalism in most of Western Europe, socialism and conservatism in Britain, and liberalism and conservatism in the US.

Sometimes, a strong personality could insert a new, undefined political direction. Adolf Hitler did it in Germany, Francisco Franco in Spain, Charles de Gaulle in France and there were others. If they had a common trait, it was nationalism, beating back perceived threats to national identity, and the dogma that the national population is significantly better than that of other nations.

In the end, these parties died with their founders, even if any successors vowed to carry on. The pull and strength of traditional mainstream parties – socialist, liberal and conservative – was stronger than the urge to revolutionise.

“The elephant graph explains why  people are unhappy”

Populism also floats on strong personalities: Jörg Haider in Austria; Jean-Marie Le Pen in France; Nigel Farage in the UK; Geert Wilders in the Netherlands; and a revolving cast in Italy, Belgium and Germany. It also rests on nationalist credos. However, Haider’s party, the Austrian Freedom Party (FPÖ), still exists after his death. Le Pen senior was succeeded by Le Pen junior, Marine. As soon as one populist leaves the scene in Italy, Belgium and Germany, another takes their place. Are these signs of change or the vagaries of history, so chaotic in nature? It is too early to tell. However, it is certain that the binary system of three political forms has served almost 200 years and large segments of the population no longer trust it or any of its three forms.

Piketty concluded that unless this nefarious characteristic of capitalism is rolled back, it will threaten democracy. While the book was a great success, the politicians ignored it.

Today, the elephant graph (see figure), produced by former World Bank economist Branko Milanovic, is the analyst’s tool to explain why people are unhappy. The elephant’s trunk shows how the rich dominate income distribution. The graph is a popular picture that, in essence, shows that Pikkety was right. Yet, he is still ignored in practical politics.

Pikkety and the elephant graph clearly explain several contemporary phenomena, such as the distrust of the financial sector, sluggish recovery of consumption and notably persistent unemployment. If productivity increases are the result of electronics, software replaces humans, the return on capital increases while wages and employment are depressed. The happy few dominate the income distribution even more and leave John and Jane Average profoundly unhappy, pessimistic about the future of their children but unaware of why or how this is happening to them. 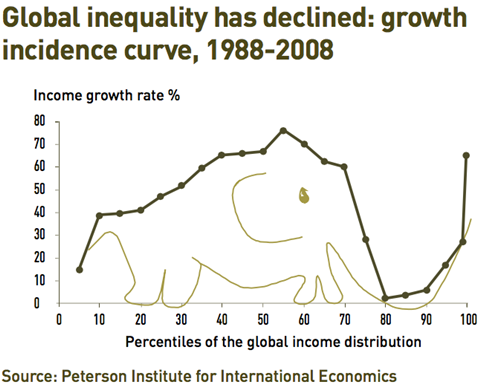 Populism banks on this unexplained but deeply felt unhappiness. It blames outsiders – immigrants, foreigners and international organisations – for what is happening. In medieval fashion, it devises the weirdest theories, plots and lies to implicate its scapegoat, unafraid of profound injustices, such as transforming fugitives into immigrants and gross errors, such as climate change denial. It rejects expertise as negative and untrustworthy. Is it a miracle that most voters reject populism, however marginally, in some cases?

However, populism, like Marxism, should be able to split itself into radical and mainstream movements, where mainstream populism thrives on nationalism without the excesses of the radicals. That would make it palatable for voters and get it into government positions.

In typically chaotic fashion, this large, logical trend is muddied by other developments. One is the rise of cyber-terrorism. Once a plague among teenagers, only capable of leading to ruined lives or even suicide, it is now a means of undeclared war. It can be freely applied in peacetime with hardly any repercussions, while lethally threatening air travel and hospitals, among other things. The other is the apparent international retreat of socialism in countries including France, Germany, the Netherlands and the UK.

In the most likely future scenario, socialism is marginalised, much of extreme-right conservatism and extreme-left socialism has morphed into mainstream populism, and mainstream liberalism has become a champion of Piketty’s analysis. Let us call the two remaining political trends ‘nationalism’ and ‘globalism’. If this is, indeed, what the global future looks like, it provides a framework for analysis by investors.

Under globalism, economic policy would target a flatter income distribution, fighting inflation and promoting international economic integration. Nationalism would concentrate on jobs and employment and would be wary of outsiders, whether immigrants or all foreigners. When growth is increasing, voters would become more globalist, when it is going down, they would become more nationalist. Underneath, the US, UK, Russia and China would have a stronger core of nationalist true believers, while the EU and Japan would have a core of globalist dogmatists.

It is tough to make predictions, especially about the future, as baseball legend Yogi Berra famously put it. Yet, as long-term investors, pension funds need to devise an analytical framework to help consider the future or they will be taken by surprise.