High-deficit pension sponsors ‘could outperform’ in 2017

Companies with high pension deficits could see their stock prices outperform if bond yields continue to rise, a strategist has predicted.

Ankit Gheedia, European equity and derivative strategist at BNP Paribas, argued in a strategy note that a basket of 40 European companies with the highest pension deficits relative to their market capitalisation would outperform European equity indices if liabilities fell this year.

“Higher yields should be a relief for pan-European companies struggling with pension deficits as a result of low interest rates, and we expect a reversal in the pension liability trend as yields climb back up to pre-Brexit levels.”

“This could drive a substantial reduction in the pension deficit reported by companies during the latest earning season,” he said. 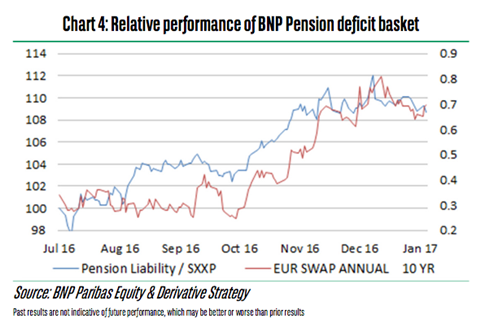 Companies in BNP Paribas’s ‘Pension Deficit Basket’ had an average pension shortfall of 37% of market capitalisation.

The basket included a significant exposure to industrial, material and consumer discretionary companies.

Gheedia reported that the stocks were valued at “near three-year low levels”.

A number of reports in recent years have sought to highlight the danger to shareholders posed by sponsors’ obligations to large pension funds.

For example, a 2014 study by Pension Insurance Corporation and Llewellyn Consulting found that, for every £100 (€117) increase in a FTSE 100 company’s reported pension deficit, its market capitalisation declined by £160.