Amongst the remarkable happenings in 2020, from startling news of a pandemic to viable vaccine and beyond, has been the speed and scale of interventions from central banks and governments.

A review of UK data over the past century, reveals how large the fiscal surge has been, particularly during a time when government receipts were reduced. The UK’s net public sector debt as a percentage of GDP, to October 2020, is back up to levels last seen in the early 1960s (see figure).

Although today’s interest rates are significantly lower than 60 years ago, not just in the UK but across developed markets, debt-servicing costs are also lower, which is (nominally) good news. However, with policymakers struggling to generate inflation, any plans to inflate away debt, as happened in the 1970s and 80s, are set to be unsuccessful, as Japan has found over the decades.

As we enter 2021, with much hope pinned to successful vaccination programmes, there is debate as to what degree economies can emerge unscathed from pandemic damage, ready to recover fully.

In addition to the complexities of accurately forecasting country-level immunity status, and the implications for mobility and economic activity, some observers argue that businesses, kept afloat in 2020 with fiscal support, remain wedded to such stimulus. In more ‘normal’ recessions, there are usually rising numbers of failures of weaker businesses, something not yet seen in this cycle. 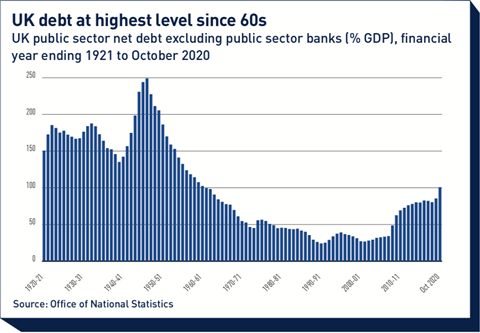 More optimistic forecasters, argue instead that at the time COVID-19 struck, the global economy was not heading for recession, that there were no significant excesses in housing markets, for example, and businesses were not struggling to survive. They argue that recovery in 2021 can be self-sustaining, should the fiscal taps not open so wide in 2021.

Bonds
After Q1 2020’s wild swings in asset prices, amid the feverish search for safe havens on dawning implications of the spreading virus, or authorities’ draconian efforts at containment. Although many risk assets have ended 2020 on highs, longer-dated (risk-free) bond yields have not risen as much as expected from surging purchase managers’ index (PMI) numbers, for example.

Should rates play catch up, might this worry risk markets which have rallied in 2020? What the stable nominal yields, particularly in the US, do not show is the rise in breakevens, and the sharp decline of real rates into negative territory. Indeed, in 2020, there has been a strong negative correlation between the performance of the S&P 500 and the direction of US 10-year real yields as measured by Treasury Inflation Protected Securities (TIPS).

While China’s economy will be one of few to have avoided shrinking in 2020, some observers suggest that achieving a doubling in size within 15 years – a goal recently voiced by Chinese President Xi Jinping - may be hard to accomplish. Over the past decade, China has tripled its debt load as its economy matured, and continued investment-driven – as opposed to consumption-led – growth could push that burden to an unprecedented 400% of GDP.

As ever, when analysing China, the numbers tend to be huge, and that certainly describes its domestic bond market. At the end of Q3 2020, the nominal outstanding in domestic bonds was equivalent to around $16.3trn (€13.3trn) about 90% of GDP, which makes it larger than Japan’s domestic bond market, with the scope to expand further.

The rapid growth in the bond market is a reflection of active policymaking to channel financing away from shadow banking and the use of bank loans for financing, and instead towards the securities market.

The main global bond benchmarks now include Chinese government bonds with some indices also including quasi-government bank policy bonds, issued by China’s policy banks. Perhaps many of the more active, and adventurous, funds have already begun to negotiate their way in the market, but plenty of flows will still be generated as passive and funds with less flexible mandates look to build their China bond portfolios.

Global service price, or core, inflation is hitting record lows, so the threat of rampaging inflation seems tame. Central banks have stressed their commitment to low interest rates and easy money, and US markets are pricing in a steady Fed until late 2023, so short rates are still firmly anchored, potentially tethering the upside for long rates should curves continue to steepen as economic growth picks up.

As rates remain low, and with valuations of many financial assets at or near historical highs, the prospects for the credit sector may feel underwhelming. However, with businesses in reasonable health, and with so much low-to-negative risk-free debt on offer throughout the developed market universe, there is maybe less to fear of significant outflows from credit back into rates. Within credit, there seems to be a strong consensus that high yield is likely to reward better than investment grade, and that moving down the credit ladder makes good sense.

What may be worth watching is the potential for sovereign defaults in 2021. There were five sovereign defaults in 2020 – Lebanon, Suriname, Belize, Ecuador and, most recently, Zambia – more than the three associated with the 2008-09 global financial crisis, and yet another record for a record-breaking year. Arguably, these nations were already in trouble before COVID-19 tipped them over. It remains to be seen, however, if other sovereigns may be at risk in 2021 before vaccines can be adequately administered and societal immunity established.

Currencies
Although the global reflation trade did eventually translate to a weaker dollar in 2020, it is getting harder to find strong dollar-bear arguments. With the collapse of interest rate differentials, so often an influence on shorter and medium term trends for currency pairs, and the US economy poised to be one of the stronger candidates, particularly versus Europe, the dollar may pick up a tailwind, at least until other economies (like Europe) pick up economic steam.

The prospect of a world free from COVID-19 changes so many dynamics and for those emerging market countries with strong healthcare infrastructures, and more credibility of fiscal and monetary policy management for example, will probably be better placed to enjoy the return of sustained, global economic growth.

Expectations of a more moderate approach to trade policy from the US, coupled with the convergence of interest rates across the world, could mean that countries’ external balances come to be far more influential in driving flows. The more structural demands derived from balance of payments surpluses (or deficits) could become dominant. Perhaps the most obvious beneficiaries of supportive balance of payments, would be the safe havens represented by the yen, Swiss franc and euro.

Without those interest-rate differentials offering opportunities for short-term capital flows, and the diminishing of the carry trade generally, there maybe also be a change in the range of low-interest-rate currencies available, and useful, for hedging.

The renminbi may also benefit from these shifts, with a good trade surplus, relatively high interest rates, decent economic growth, and the potential for large inflows as index-following fixed-income portfolios build up their Chinese exposure (see panel). 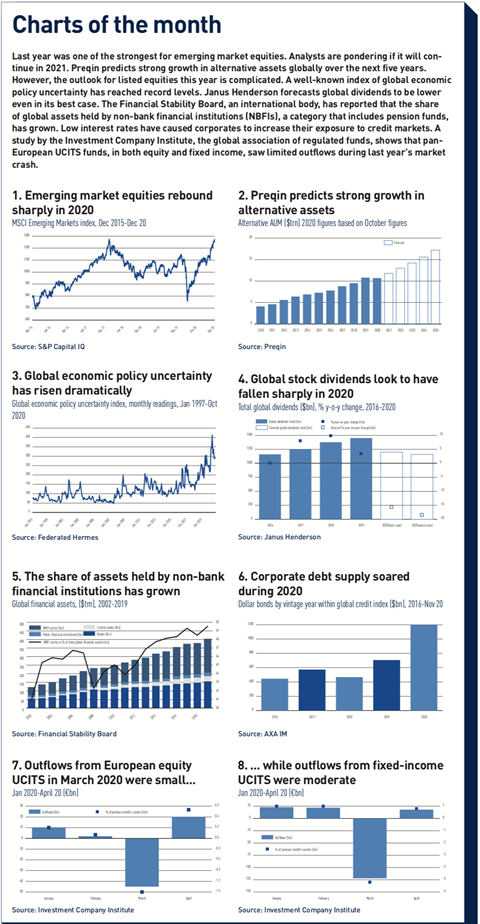