According to a Wall Street Journal blog*, the word “unprecedented” was used in 395 of the publication’s articles in the past three months. Also popular were massive, enormous, staggering and eye-popping. These words could all have appeared in a variety of articles including those describing central bank actions or Treasury announcements from across the world. They could also apply to recent economic data such as factory orders or retail sales or purchasing managers’ indexes (PMIs) in any number of economies.

US employment statistics have been remarkable, particularly now that data is available for April so better reflecting the US economy in lockdown (see figure). Reaching near record lows as recently as this February, the current 14.7% unemployment rate is the highest since the seasonally-adjusted data began in January 1948. And experts, including some White House advisers, are forecasting that unemployment rate has not yet peaked. They expect a rate of 20%, or perhaps higher, may be soon reached.

That the US stock market has already exited its technical bear market is puzzling and worrying to investors. Although it is again the technology group – Alphabet, Amazon, Apple, Facebook and Microsoft – lifting the overall US S&P 500, the wide gulf between the financial market and the real economy is disconcerting. Equity prices seem to be discounting a win-win scenario where either the economy recovers quickly and smoothly or, if it does not, the Federal Reserve will bail everyone out, the Powell put.

It is appropriate that central banks – like governments – remain in risk management mode. They are supporting financial intermediation and liquidity with ‘whatever it takes’ as long as the pandemic continues to pose risks. However, the processes are unsustainable, and perhaps unaffordable, in the longer term. Although rates were cut more during the global financial crisis of 2008-09, this time the expansion in balance sheets has been greater, and more synchronous.

The relationship between central banks and governments is closer than it has been for decades. This shift is raising difficult questions about central banks’ independence. That central banks are also becoming involved in private-sector credit markets has been met with some disapproval. 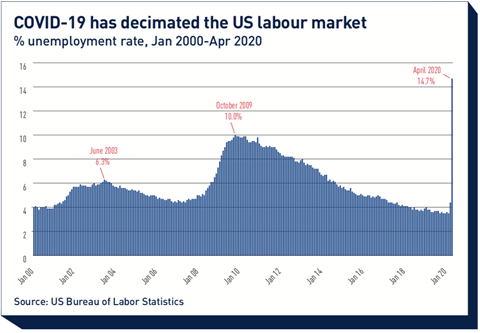 In response to concerns of moral hazard, Fed officials counter that as the shock is clearly exogenous it is a unique event. It should not provide a blueprint for actions during future more ‘normal’ recessions.

There are also questions as to whether the response may exacerbate a dynamic that many found troubling even before this crisis. That is the co-dependency between markets and the Fed. A similar relationship seems apparent with central banks not just the European Central Bank, Bank of Japan and the Bank of England.

Mohamed El-Erian, Allianz’s chief economic adviser, describes this as unhealthy. “Every time the central bank surprises with some bold easing the market demands more,” he says.

Bonds and currencies
With two-year rates hovering under 0.2% it seems appropriate to ask whether the Federal Funds rate might slip into negative territory. Futures are apparently pricing such a shift as possible sometime next year. In press interviews, however, Fed Chair Jerome Powell has, so far, been quite vocal against this notion.

Gavyn Davies, head of global economics at Goldman Sachs in the 1990s, is sceptical of the prospect of negative rates in the US. He argues that such a move would be sufficiently dramatic to convince investors that the crisis is approaching its end.

It is unclear whether or not the Fed is legally allowed to take rates negative. However, Davies suggests that the presence of the $4trn (€3.7trn) money market funds provide a deterrent to a Fed anxious to avoid any repeat of the panic caused back in 2008 when one fund collapsed, failing to pay back investors’ principal. Furthermore, Davies suggests the experiences of Japan and the euro-zone hardly offer evidence that negative rates are successful.

However others, including several ex-Fed chairs, take a different view. Ben Bernanke, for example, wrote in January: “Categorically ruling out negative rates is probably unwise, as future situations in which the extra policy space provided by negative rates could be useful are certainly possible.” He suggests the Fed should maintain a ‘constructive ambiguity’ about negative rates, whether or not there is an intention to use them.

As China and other east Asian economies gradually re-open, and European countries and some US states edge towards a phased re-opening of their economies, there is little consensus, or indeed conviction, around forecasts of potential recovery paths.

Because the crisis did not originate as a financial one (historically, the hardest to economically recover from), some more optimistic analysts suggest that, given both the size of stimulus packages and the speed with which they have been introduced, economic recoveries could be quite robust. On the other hand, even if feared second waves of infections do not materialise, is it not possible that the crisis, although it did not start as one, could become a financial one?

The Chinese economy, being closely watched these days, is enjoying a bounce from its lows although the signs are not all positive. This could suggest a hesitancy among consumers to embrace the revival.

Analyst forecasts for Europe’s first quarter GDP data underestimated the extent of economic retrenchment. In particular they misjudged how much private consumption would fall once the pandemic was declared even before lockdowns. And in the US, the savings rate has recently jumped five percentage points to 13%. It seems people, while wanting to be hopeful, are also nervous.

John Maynard Keynes writing in 1936 described a ‘paradox of thrift’, where increased saving by anxious consumers leads to decreased spending and ultimately to lower income for everyone. One person’s consumption is another person’s income. More than 10 years after the global financial crisis, companies are again facing an existential threat, which may well promote cautious behaviour.

Economists say there is no such thing as a v-shaped recovery. They say that, while economies may eventually return to a similar growth rate, there is almost always some permanent output loss. Recessions tend to leave scars that last for years. The worse the economic slowdown, the deeper are those scars which damage potential growth rates.

As well as generating the highest peacetime debt levels, there is a danger that the huge state interventions tend to favour big companies. Smaller firms look set to suffer disproportionally, perhaps because banks may be reluctant to lend. Just how many job losses will be temporary is unknown. That is particularly the case given that overshadowing all economic forecasts, it is still not known whether second waves of COVID-19 can be avoided.

While the Fed may not be about to launch into a headline-grabbing zero interest rate policy (ZIRP), its actions in the US credit markets have created a huge amount of activity. The US investment-grade market has not seen such a deluge of supply before. In recent years, $500bn might have been raised over a period of about 20 weeks or more. This time it took just seven weeks and the bonds have a considerably longer maturity profile. 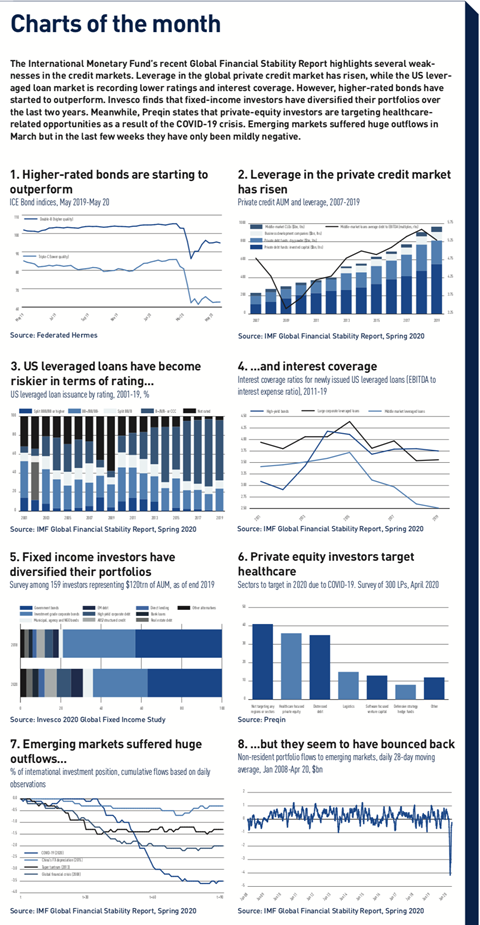 Credit spreads have narrowed but rating agency downgrade-to-upgrade ratios are the worst seen for decades. They are led by high-yield downgrades while defaults are picking up within leveraged loans in those sectors most exposed to COVID-19.