A persistent low-rate environment has challenged the safe-haven status of fixed income that for decades served as a reliable hedge to equities, while consistently generating attractive returns. In today’s environment, an increase of just 0.2% in interest rates, a move that is smaller than the smallest increment considered by the US Federal Reserve, will wipe out an investor’s entire year of corporate bond gains.

Known as the Sherman Ratio, this sobering gauge of the bond market’s fragility has been flashing red for some time and is likely to persist. At the December 2020 meeting of the Federal Open Market Committee (FOMC), 12 of the 17 members projected that rates will remain at historically low levels until 2023.

Furthermore, due to the current low-rate milieu, investors have come to depend on ‘risk-free’ equities to meet their liabilities. But when the equity run comes to its expected, and perhaps inevitable end, the traditional cushioning role that fixed-income investments have played during untimely market upheavals seems uncertain at best.

As a result, investors are working to reposition their portfolios. For example, the January 2020 HFM Investor Intention survey revealed that one-third of the institutional investors surveyed now regard hedge funds as a possible fixed-income replacement for their portfolios. 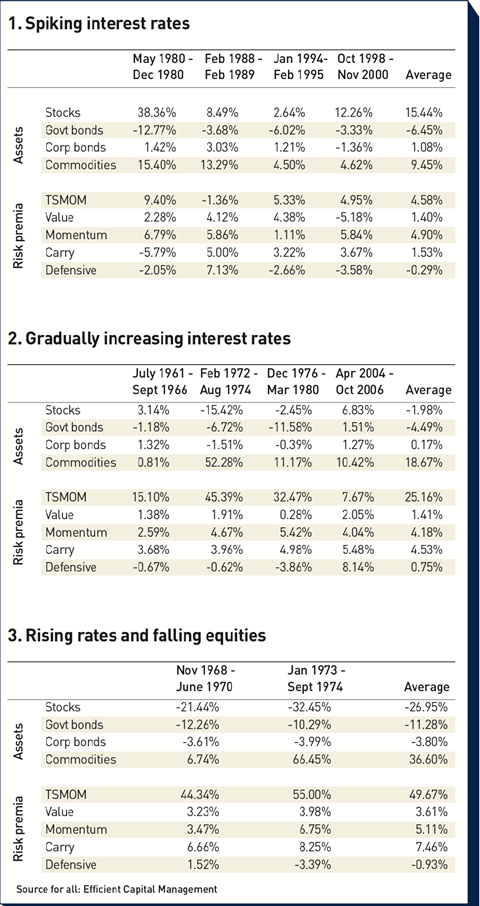 While this may be a prudent allocation decision, it is difficult to assess because hedge funds employ a diverse set of strategies, their track records may be too short to include scenarios that investors are concerned about, and alternative superior options for investment might be available.

This article introduces a framework developed in collaboration with Paul Kreiselmaier from Verus Investments that provides practical guidance to institutional investors for making strategic asset-allocation decisions that can succeed in a low-interest-rate environment.

Second, we identify historical sub-periods between January 1961 and December 2020 that match the scenarios.

Finally, we evaluate the performance of assets and strategies during those historical periods. As Mark Twain once said, “history does not repeat but it does rhyme”.

In this article, we illustrate the framework by considering US stocks, US government and corporate bonds, and commodities, to represent the bulk of asset classes used by institutional investors. We also examine the five risk premia of time-series momentum, value, momentum, carry and defensive often employed by quantitative hedge funds.

Using risk-premia performance rather than the track records of individual hedge funds or hedge fund indices solves the problem of short track records and the diversity of hedge-fund strategies. Our analysis is performed using excess returns for the assets and risk premia available in the AQR data library, but it can easily be expanded and customised within our framework by including additional asset classes, risk premia or any other investments relevant for specific institutional investors. We hope that investors will find benefit from using our framework in the challenging low-interest-rate environment as it helps them avoid the myopic framing of the last decade as normative for forward guidance.

Spiking interest rates
Historically, there have been four periods in which the short-term interest rate spiked more than 2 percentage points within a period of six months to two years: May

As shown in figure 1, while rate spikes seem scary, historically they have not been challenging for institutional portfolios. Although government bonds lost 6.45% per year, on average, and corporate bonds were flat, the stock market and commodities have delivered strong annualised returns of 15.44% and 9.45%, respectively. Time-series momentum and cross-sectional momentum stand out as the two risk premia that help the most during this environment, while the defensive strategy underperforms.

Figure 2 shows that although US bonds lost 4.49% per year, on average, which is less than what they lost during the periods of spiking interest rates noted above, stocks struggled to deliver returns and were down 1.98%, on average. Carry and momentum strategies produced more than 4% per year, whereas commodities and time-series momentum delivered high double-digit returns of 18.67% and 25.16%, respectively. The defensive strategy once again tends to struggle in this type of environment.

This environment has been devastating for institutional investors. On average, stocks and government bonds were down 26.95% and 11.28% per year, respectively. Corporate bonds also struggled, while the defensive strategy underperformed. The risk premia of value, momentum and carry, however, consistently delivered positive returns. Moreover, commodities and time-series momentum produced striking annualised returns of 35% to 50%, on average. These abnormal returns are particularly attractive, given the large losses experienced by stocks and bonds that typically represent the majority of assets held by institutional investors.

Summary and conclusions
The current low-interest-rate environment is posing a challenge for institutional investors as they try to reposition their portfolios for the future. Our article has introduced a framework for evidence-based strategic asset allocation that is tailored to the market scenarios that may arise in this environment: spiking interest rates; gradually increasing interest rates; and rising rates and falling equities occurring simultaneously. While institutional investors can further benefit from our framework by considering a broader range of investments that are relevant for their portfolios, our empirical analysis produces several insights with practical importance for most institutional investors:

• Investors should be concerned about the performance of their stock and bond portfolios in a low-interest-rate environment. In particular, gradually increasing interest rates or a combination of rising rates and falling equities pose major performance threats to these types of portfolios.

• Although commodities have been heavily criticised in recent years because of their poor performance, they may provide rare value to a portfolio in this type of environment.  Commodities are known for their inflation-hedging characteristics, and they performed extremely well during the most challenging periods considered in our study.

• It is prudent to consider diversifying strategies such as momentum, value and carry that are commonly employed by quantitative hedge funds because they have consistently delivered positive performance across all the market scenarios under examination. However, the defensive strategy tends to struggle in a low-interest-rate environment.

• Finally, time-series momentum stands out as another potential offset against portfolio losses within this environment. While our study shows that it performs well in a low-rate environment, it is also known for producing superior returns during market crisis (crisis alpha) as evidenced most recently during the global financial crisis of 2008.