US COVID-19 figures were rising rapidly at the time of writing. Western European figures were divided. Many showed a climbdown from the second wave but Germany, the UK and the Netherlands were faced with growing figures. Japan’s statistics were up, forming a third wave. In a few weeks, we will know how the deployed vaccines work in practice.

Analysts are almost unanimous in perceiving lower political risk. It has gone down in the US with the election of Joe Biden as president, in the UK with the sacking of Dominic Cummings as a prime ministerial adviser, and globally with COVID-19 vaccines starting to be deployed. Yet risk remains: a political deadlock in the US, the Irish border upsetting a trade agreement and the threat of widespread refusal to be vaccinated. Meanwhile, economists persist in predicting a recession.

Asset allocation
Equity sentiment is brimming with optimism as the political and health situations improve. So far, the impediments to vaccine distribution seem technical, so that they can be overcome.

The risk is unforeseen health complica- tions among those vaccinated first. If that happens, it seems likely that the UK would suffer most. UK sentiment has caught up with those of the other areas but is still lagging those of the US, EU and Japan, that have converged on a 12-month high level.

Net bond sentiment is stable. Expectations are converging, as those for Japan are descending. In all areas, the distance between equity and bond expectations grew.

Unsurprisingly, all of the neutral votes went down, often sharply, with the interesting exception of EU bonds, where doubt and uncertainty increased slightly. 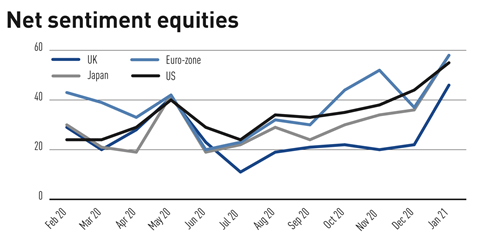