Vaccination figures are rising steadily, but are still at a relatively low level. The US and UK, both important vaccine producers, lead the field with the EU and Japan lagging. As the speed of vaccination has increased, supplies have become a problem, except in the UK. This has caused bad feelings in the EU to the point where a trade war was threatened. New vaccines are in the regulatory pipeline but market shares have largely already been divided in the developed countries. The discovery of new COVID-19 mutations and their resistance to vaccines are an additional risk.

UK sentiment figures have stopped catching up with those of the EU and US. The relief offered by the trade deal with the EU may have been replaced by renewed fears of political risk as the effects of newly adjusted border procedures are hitting home.

Asset allocation
Net equity sentiment in all regions, excluding the UK, are stable at a record high level with uncertainty still at historical lows in the US and Japan. While optimism remains, some of those who were uncertain are turning into pessimists. Predictions of stability remain virtually the same in the EU and are on the rise in the UK. It looks like fears and dismissal of a bubble are increasingly polarised.

While US, EU and UK net expecta- tions for bonds have converged at a low level, sentiment in the Japanese bond market remains remarkably stable. This makes that market a prime refuge for those who fear a bursting of the asset bubble. 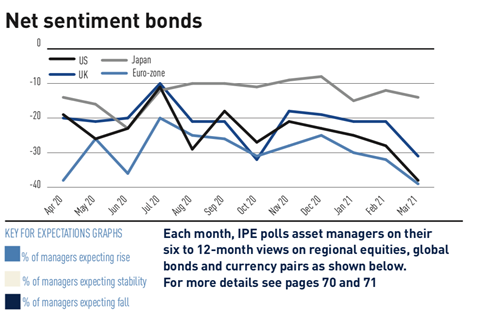