The delta variant has caused a new COVID-19 wave in many places but it is different in character from previous ones. New hospital admissions are typically from among the unvaccinated. The average age of COVID patients has also come down significantly. In western Europe, the current wave seems largely under control, albeit at higher levels in the old EU member states.

Political risk is building up beneath the surface. There is complacency about the possibility of success of the COP26 climate summit in November. It looks like the level of finance to be made available will be disappointing.

Asset allocation
Net equity sentiment has barely moved since last month. Valuations remain so high that even a small black swan event could have an outsized effect. What if enterprises start hiring massively after the summer holidays, causing consumption to catch up rapidly? It would be in line with continued growth expectations but inflation would increase rapidly.

Net bond sentiment suggests the opposite, rising everywhere and leaving Japan as the outlier. The pattern indicates continuing high growth without inflation, probably as analysts expect demand to catch up with, but not exceed, present capacity.

The neutral view remains largely unchanged, still showing more certainty about equity than about bonds. This is compatible with opposing views on whether demand will be within capacity to produce or not.

Country allocation
Japan’s bond sentiment figures have been a clear outlier for months, while the UK scores consistently slightly lower for equity sentiment. Otherwise, expectations for bonds and equity remain closely correlated, ignoring significant differences between regions, such as inflation and share of vaccine refusers. As political and COVID-19 risk hardly seems to count for analysts, market leadership becomes important. For bonds, it rests with the EU where net bond sentiment has risen for two months, while for equity, the US may be leading the others. 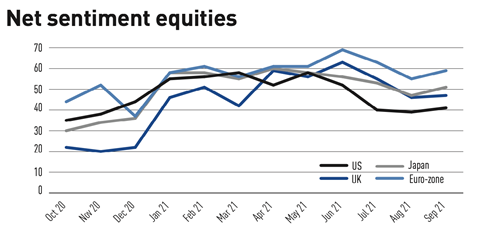