Perspective: What is trusteeship worth?

Running a pension fund is a difficult job, whether for an executive, a professional trustee, or a member-nominated representative

How much should pension scheme trustees be paid? While plenty of data exists on current remuneration levels, the overall picture is of a wide range – and no real agreement on what is ‘right’.

There is no question that running a pension fund is a difficult job, whether for an executive, a professional trustee, or a member-nominated representative. The regulatory requirements increase every year, with new national or international rules, reporting needs and guidelines to follow.

Then there is the reputational risk: the bigger the scheme, the more scrutiny those running it receive from the media, members and politicians.

In the UK, most member-nominated trustees are unpaid, instead attending meetings and training sessions alongside their day job, with expenses covered but little reward. The largest schemes will require more commitment from their trustees and so offer some remuneration but the level varies.

The rate for the job
Winmark’s annual survey of trustee remuneration – conducted in partnership with Barnett Waddingham – found that the chairpeople of UK scheme trustee boards were paid an average of £47,305 (€52,024) in 2019, virtually unchanged from 2018. However, pay levels ranged from £7,000 to £120,000, among the 120 respondents.

In the Netherlands, a survey by TPRA, the Dutch pensions rating agency, published last October found that benefits had risen on average when compared with 2018 data. Members of accountability bodies saw pay increase by 2.4% year-on-year, while supervisory board members’ pay rose 7% to €13,131.

If trustees are required to spend more time on the scheme they can typically expect to be paid more. According to the Winmark survey, board chairs working one or two days a month were paid an average of £34,464 a year, while those needing to dedicate five days a month or more were paid on average £55,680 (figure 1).

Similar surveys conducted by PwC in 2017 and 2018 showed that, overall, trustee pay was on the rise – broadly in line with the increasing hours the role demanded.

As Liz Bostock, a senior benefit consultant at Buck, explains, there is “no one standard figure” as remuneration will depend on a variety of factors. These can include the existing make-up of the trustee board, the presence of a professional trustee, the financial position of the sponsoring employer, as well as any restrictions on pay contained in the scheme’s rulebook.

In addition, the workload and skillsets required will vary according to the scheme’s profile, sector, and complexity, and appointees with high levels of experience can command higher pay.

Its ‘Future of Trusteeship and Governance’ paper, published in February 2020, stated that lay trustees should record a minimum of 15 hours of training a year, with professional trustees set a minimum of 25 hours.

“This is just the tip of the iceberg, however,” says Bostock. “The role of a trustee is increasingly complex and demanding and, as a result, it can require a great deal more commitment. Attendance at four trustee meetings a year, plus the required preparation is in itself a large time commitment of at least 25 hours a year.

“There are many barriers in place which could potentially impact the desire to become a trustee, such as the ever-increasing governance requirements.”

In the UK, the expanding regulatory requirements of trustee boards have led to a rise in demand for professionals. These individuals can sit on multiple boards and often have experience in the actuarial sector.

Richard Butcher, client director at professional trustee firm PTL, says most schemes understand the work a new trustee takes on and the value of independence and professionalism, so are happy to pay. 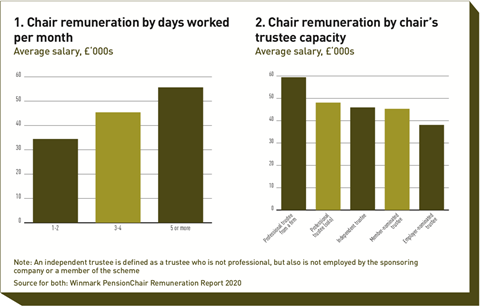 “Every case is different, but we have broad experience and a broad portfolio of schemes,” he says. “When we are appointed by trustees, we give them the choice of time cost, fixed fee or a hybrid. Fixed fee is based on our expectation of the time spent on delivering that service.”

To pay or not to pay?
For those member-nominated trustees that are not paid, there is a case for introducing some form of remuneration – particularly given the risks and workload.

TPR’s work on improving trusteeship has shied away from imposing a professional trustee on every board, but its drive for higher standards has led to more pressure on the non-professionals.

Diversity needs addressing
Winmark’s remuneration data shows that female trustee board chairs can expect to be paid more than men on average: £51,111 to £46,829 in 2019. However, the data is skewed as just 14% of respondents were women.

Respondents to the survey acknowledged that the sector needed to do more to improve on diversity. About two-thirds (63%) said trustee boards were not diverse in terms of age, while 55% said the same for gender. Some 37% said there was not enough diversity of professional background.

However, many schemes have yet to address these shortcomings. Just 40% of respondents said their board had acted on improving diversity in the previous year. 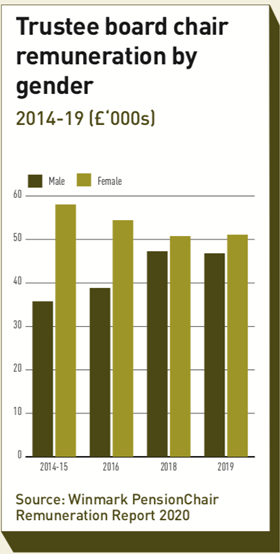 “There is a lot of work to be done to improve the diversity of scheme trustees and renumeration is just one part of this challenge,” Liz Bostock, a senior benefit consultant at Buck says. “The way to achieve better representation for scheme members – and therefore potentially better outcomes – starts with an engaging and compelling communications strategy.

“When pension scheme members are more engaged, they are more likely to interact with their scheme and building this engagement and interaction can help to encourage members to become scheme trustees. This process will ultimately ensure that trustees better represent the diversity present in their scheme members.”

John Reeve, director at consultancy firm Cosan Consulting, counters that paying more for trustees may not always result in better outcomes. He points to the UK’s charity sector, which, like many pension schemes, typically pays trustees and executives less than the private sector.

For both sectors, in most cases, paying according to the risks and commitments required would be unaffordable. This means pension funds and charities attract people who are “committed to the cause and who do the job because they want to, rather than because they have to”.

“Often this leads to better outcomes,” Reeve argues – but when problems emerge, trustees may not have the skills.

He continues: “One matter that is true of both charities and pension trustees is that it is an important job and needs to be done diligently, irrespective of the pay. Does paying someone a small amount make them more diligent? Good trustees, pension or charity, should deliver what they promise and act diligently irrespective of pay.”

The Dutch dilemma
In the Netherlands, trustee pay is a sensitive issue given the likelihood of future cuts. This has meant it has become harder for TPRA to get a full picture of remuneration in its annual survey.

Despite pay increases, average remuneration remained below the standard set by the Pensions Federation, TPRA said. In 2011, the trade body suggested that remuneration should be based on a union’s total employer expenses for board members representing workers. This amounted to €140,000 for a trustee at a large sector scheme of €10bn or more in a full-time job, down to €100,000 for board members at schemes with less than €1bn.

TPRA’s data suggests that most pay is still below those levels. For example, in 2018, the hospitality sector scheme Horeca & Catering had more than €10bn in assets but paid board members an average of €25,000.

Case studies: SAUL and USS
At the £3.6bn (ˇ4bn) Superannuation Arrangements of the University of London (SAUL), 12 of its 16 directors are independent and received “emoluments”. These totalled £301,000, according to the multi-employer scheme’s 2018-19 annual report, equating to an average salary of about £25,000.

The remaining four directors are employed by companies participating in SAUL and can only claim expenses. Instead, their employers are paid compensation for the time they spend away from their day jobs. In 2018-19, this totalled £77,000, or £19,250 per director.

As the largest scheme in the UK – and one that has been under intense scrutiny in recent years over its funding position and contribution levels – USS’s pay levels have been put under the microscope.

However, the scheme has emphasised that its total remuneration level – including the salaries of its in-house investment and administration teams – presents good value for members given the cost savings it has achieved versus hiring external staff.

Individual remuneration varies greatly by scheme size and complexity, as with the UK, although increasing professionalisation could lift pay, TPRA said.

Newer APF schemes – specifically designed to pool smaller schemes together – generally pay more, TPRA’s research found. This may be because these funds are typically run by insurance companies, which have the capacity to pay more.

While many schemes published remuneration data, some were less likely to reveal how much they paid board members. TPRA said the reluctance to offer this level of transparency made it difficult to hold trustees and executives accountable.

The general trend for trustee remuneration is upward. But, whether the current levels are sufficient compensation remains up for debate.