Despite pressure on revenues from oil and gas, Arab sovereign wealth funds are taking opportunistic bets in foreign markets in the face of global economic turmoil

While Norway’s sovereign wealth fund (SWF), Government Pension Fund Global, is making headlines for its perceived green ambitions and Norwegian government plans to withdraw about $37bn (€33bn) from the fund to mitigate the COVID-19 crisis, Arab SWFs are continuing their expansion strategies.

Some asset liquidation has been reported but the level of pressure on the Arab SWFs by their respective governments is not at the same level as in Norway. Yet, from a purely financial angle, Arab SWFs are facing the same toxic mix of uncertainty, global economic crisis, ongoing lockdowns and a deepening crisis in their main revenue base, oil and gas.

The OPEC-plus agreement between oil producers to cut output, and additional production cuts by Saudi Arabia, the United Arab Emirates (UAE) and Kuwait, will push Gulf Cooperation Council (GCC) budgets even deeper into deficit amid the collapse in oil prices. This is contributing to a stark contraction in overall domestic and regional economic output, along with an unprecedented recession in non-oil economies in the GCC.

Economic and political stability is threatened, as these countries’ social contract is based on a rentier state system in which wealth and revenues are redistributed.

In higher-rated GCC sovereigns such as the UAE, Saudi Arabia and Qatar, large wealth funds and central bank reserves, together with manageable government debt levels, are expected to act as a buffer.

Fitch also expects that the lower-rated sovereigns Oman and Bahrain will be assisted by financial backing of the stronger GCC parties. But even if the region is not threatened by economic collapse, downgrades have been issued in the past, as with Saudi Arabia.

The main underlying reason for such downgrades is that higher fiscal deficits are expected in all GCC states, reaching levels of 15-25% of GDP in 2020. 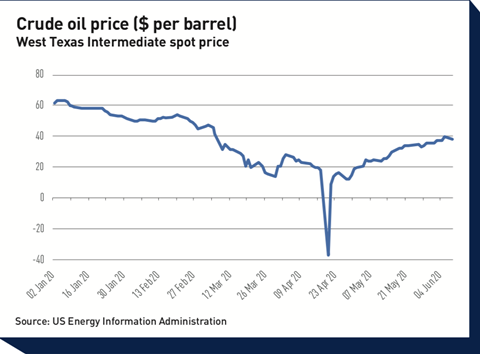 As the hydrocarbon-based economies of the GCC countries is under severe pressure, the role of Arab SWFs has changed dramatically in recent years and they have now become financial backers of economic diversification and transition to mitigate a future without hydrocarbons.

As such, Arab SWFs are now not only affected by increased volatility in crude oil and gas prices; they are also affected by price developments of asset classes such as shares, bonds and real estate on the global market in their wider portfolios. The ongoing shocks in the system, all at the same time, are a new phenomenon.

If the above painted picture is rather gloomy, Arab SWFs seem to hold different views. The Saudi Public Investment Fund (PIF) is continuing with its strategy to increase Saudi economic diversification efforts, as presented under Saudi Vision 2030 of Crown Prince Mohammed bin Salman, while taking advantage of share prices crashes in major economic centres. The PIF, as the main opportunistic sovereign fund, has openly shown an interest to expand its overall share holdings and investment internationally.

Stock valuations are not seen as a risk at present in Riyadh or other Gulf Arab capitals but as an opportunity to increase their overall stakes in international operators or specific high-tech sectors deemed to be of strategic importance for the future of the GCC regional power houses.

The current opportunistic streak by Arab SWFs is a clear sign that a non-hydrocarbon future is being sought. Grabbing blue-chip stocks ‘on the cheap’ is a very enticing prospect, especially when looking at the current market fundamentals.

There have been market rumours for months that Arab SWFs were on a buying spree, although real facts were scarce. In May, however, US Securities and Exchange Commission (SEC) filings revealed PIF holdings in large corporates including Boeing, Bank of America, Citigroup and Facebook. In total, according to SEC data, PIF holds around $10bn in US-listed stocks, $8bn more than before the COVID pandemic.

Remarkably for some, the PIF also is becoming a large shareholder in ‘big oil’ and other hydrocarbon-related companies, although its strategy already clearly includes oil and gas following the transfer of Saudi Aramco to the PIF by the Saudi government. The PIF now holds stakes in BP, Shell, Total and Suncor Energy, to sit alongside its holdings in Equinor (formerly Statoil).

Strategically, the PIF’s investments in oil and gas production make sense. In coming decades, most of Saudi Arabia’s government revenues will still be oil-linked. Internationalising Saudi reach to other oil producers is a clear support to strengthen its national oil company Aramco.

Acquiring hydrocarbon-related stakes in international giants not only strengthens Saudi Aramco, it also gives it a clear road to influence others if needed. As an owner of Aramco, the PIF has an information and decision-making advantage that could also influence the upward potential of its own shareholdings.

Investing in medium-term, bankable oil and gas producers is a prudent and functional approach. However, holding stakes in these companies should not be looked at only from a financial point of view. The strategy is also interesting in the long term and implies a direct geopolitical-economic strategy by the Saudi government.

Abu Dhabi’s largest SWF, ADIA, has been reasonably quiet in its direct investments in upstream oil and gas companies, but there does appear to be a healthy appetite to support the ongoing internationalisation efforts of its national oil company, ADNOC.

One prime example is the statement by Indian oil-to-telecoms giant Reliance Industries that ADIA will buy 1.16% of its digital unit Jio Platforms for $752m. This comes just after Abu Dhabi’s second SWF, Mubadala Investment, announced it will purchase a 1.85% stake in Jio Platforms. The latter move also shows a growing interest by Arab SWFs for Indian projects and investments, indicating a possible change from their previous Chinese focus.

Qatar has faced a four-year regional crisis in which a UAE-Saudi-Egyptian alliance has shunned Doha. In May it was reported Qatar’s SWF, QIA, was in discussions to arrange a $7.6bn loan with European equity investments pledged as collateral. Qatar also raised $10bn in an April bond sale that attracted $45bn of orders.

The future of Arab SWFs is not at stake at present, even if the current economic situation looks dire, exacerbated by a slump in hydrocarbon revenues.

An increase in oil and gas prices based on market fundamentals is not out of reach and would improve Gulf countries’ economic prospects. But by pursuing a prudent but opportunistic investment strategy, as in the case of PIF and others, Arab SWFs can reap the rewards of these strategies in the coming years. Income from these ventures should nevertheless be invested in a sustainable and prudent way in their local economies, in particular to prepare for a post-carbon future.